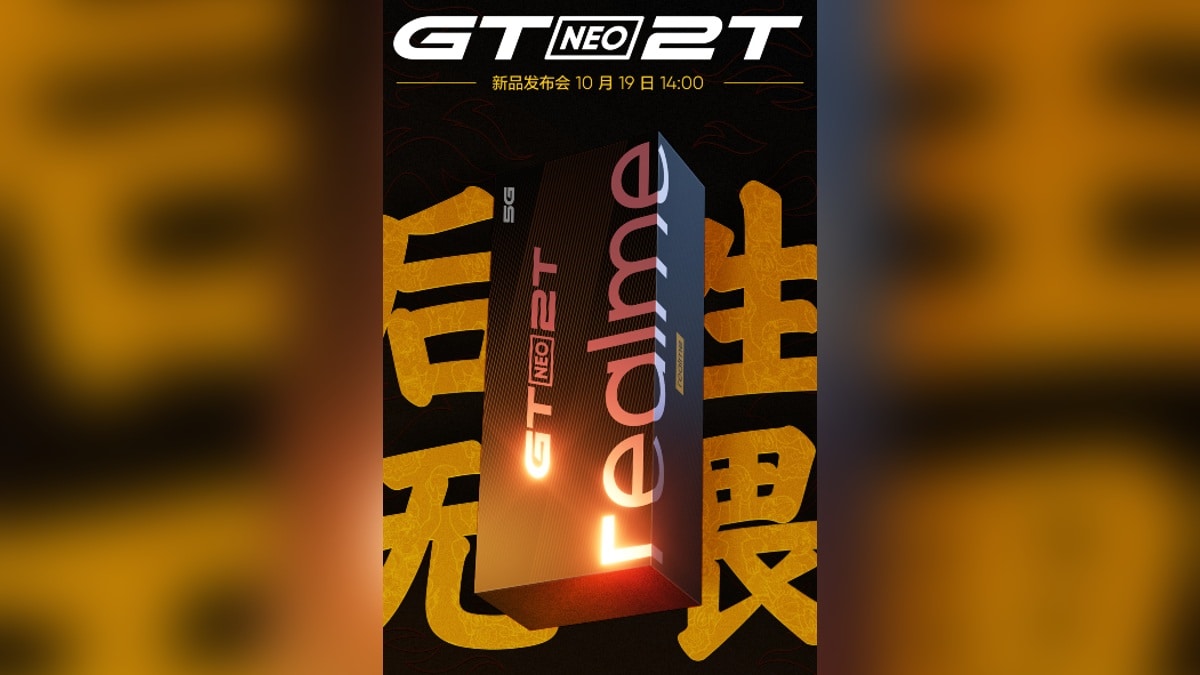 Realme GT Neo 2T launch in China is set for October 19, Realme confirmed through a post on Weibo. The specifications of the upcoming smartphone are not known yet, however, rumour mill suggests that the smartphone may be powered by the MediaTek Dimensity 1200 SoC, though the use of a Snapdragon 888 SoC was rumoured previously. A Realme smartphone with model number RMX3357 was recently spotted on the TENAA certification. Earlier this month, Realme CMO Xu Qi Chase took to Weibo to hint at the launch of a new handset in the Realme GT Neo 2 series. Recent leaks have indicated the smartphone would be similar to the Realme GT Neo 2, with minor changes in the rear panel design and specifications.

The alleged Realme GT Neo 2T is listed to pack a triple rear camera setup with a 64-megapixel main camera, 8-megapixel secondary sensor, and 2-megapixel third sensor. It is said to feature a 16-megapixel selfie camera. The listing also reveals that the handset will pack a 4,400mAh battery. The smartphone could come in two RAM and storage configurations — 8GB RAM + 128GB storage and 12GB RAM + 256GB storage.

While there is no information on Realme GT Neo 2T smartphone’s SoC, Realme CMO Xu Qi Chase hinted on the Chinese microblogging platform Weibo about a smartphone in the Realme GT Neo 2 series that will be powered by a different flagship chip. At the same time, tipsters including Digital Chat Station and Mukul Sharma shared details of the upcoming phone. While rumours indicated the phone could be powered by the Qualcomm Snapdragon 888 SoC, a report by MySmartPrice says that it could feature a MediaTek Dimensity 1200 SoC under the hood.

Recent leaks tipped the Realme GT Neo 2T had surfaced on the MIIT certification site, and that the smartphone would feature a centre hole-punch camera design and a display with 120Hz refresh rate. The phone is likely to run on Android 11, and feature a different rear panel design from the Realme GT Neo 2.

Sourabh Kulesh is a Chief Sub Editor at Gadgets 360. He has worked in a national daily newspaper, a news agency, a magazine and now writing technology news online. He has knowledge on a wide gamut of topics related to cybersecurity, enterprise and consumer technology. Write to [email protected] or get in touch on Twitter through his handle @KuleshSourabh.
More