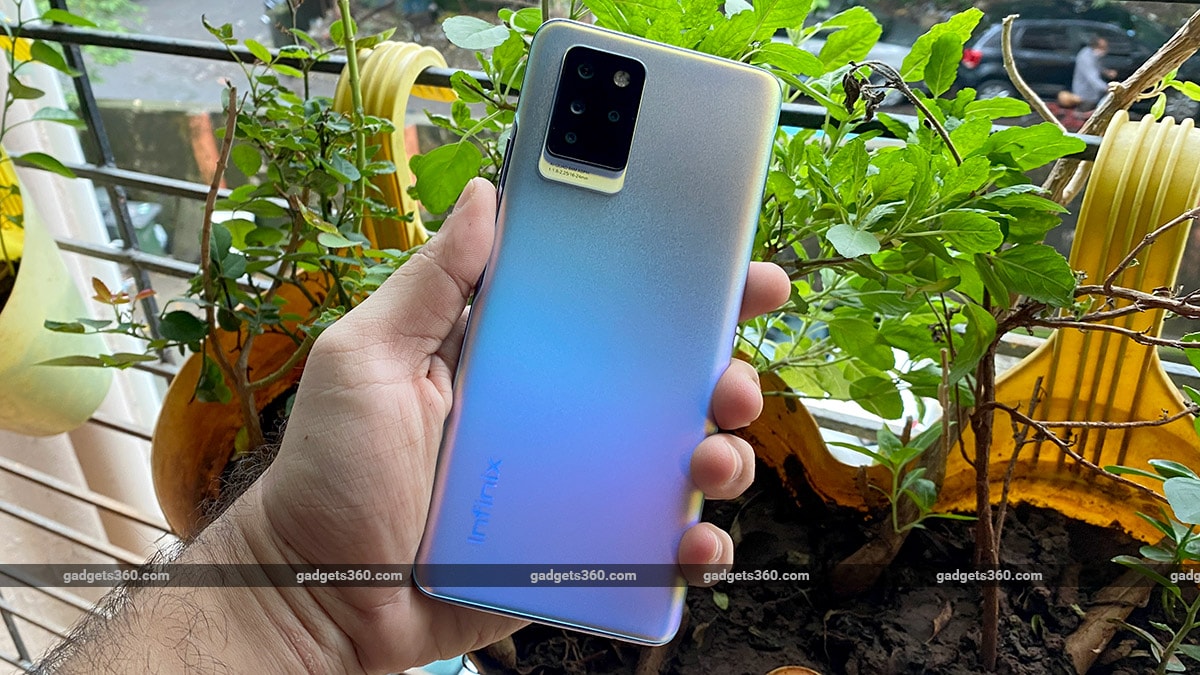 We don’t have any new additions to our list from last time as there hasn’t been any notable launches. Continuing to have a cosy spot on our list are the powerful Poco X3 Pro, Moto G60, and the iQoo Z3, all of which delivers impressive performance as well as features.

Overall, it’s been an action-packed year in the Indian smartphone space. Realme introduced new phones in its primary number series as well as its X series, two of which have made the cut for this list. Xiaomi’s Redmi Note 10 series has also set a new bar for the kind of features one can expect in this segment. We’ve also retained a few slightly older models which we feel are still worth your attention.

If you have a budget of Rs. 20,000, here are some of the best smartphones that you should be considering for your next purchase.

The Infinix Note 10 Pro is a bulky and unwieldy smartphone but if you can make your peace with that, you’ll find the 6.95-inch display very rewarding for consuming content. The stereo speakers add to the experience, although they sound a bit tinny. We found the overall system and gaming performance to be very good and there’s a selfie flash that worked well when shooting in low light. The cameras on the whole were average and there’s a lot of bloatware preinstalled which has the tendency to generate spammy notifications. If you’re looking for something other than the usual offerings, Infinix Note 10 Pro could be a good alternative.

Poco touts the X3 Pro as the spiritual successor to the Poco F1, a phone that delivered a flagship SoC at an unheard of price for its time. The X3 Pro features a Qualcomm Snapdragon 860 SoC, which is a slightly tweaked version of the Snapdragon 855, but without the 5G modem. That’s still a lot of CPU and GPU power for a phone under Rs. 20,000, making it a good choice for gaming in this segment.

Unlike the Poco F1, the Poco X3 Pro has a bold and flashy design with colours to match, clearly targeting the youth of today. It’s packed with great features too, such as an IP53 rating, Corning Gorilla Glass 6 over the display, stereo speakers, a 120Hz refresh rate screen, and a big battery that can fast charge at up to 33W. For a gaming phone, the rear and front cameras aren’t too bad, provided you use them in ample light. The only downsides are that the Poco X3 Pro is bulky and heavy, and dealing with the promotional content in MIUI can be a chore.

The Motorola One Fusion+ was a solid offering under Rs. 20,000, and now the Moto G60 replaces it at a similar price but with even more features. Some of the highlights include a 108-megapixel main camera, 120Hz display, 6,000mAh battery, and faster Qualcomm Snapdragon 732G SoC. It’s also one of the few phones that has a dedicated Google Assistant button.

One of the things that we really liked about the Motorola Moto G60 was its clean software, with no bloatware or ads. General performance was very good, and the display with HDR10 certification meant media consumption was very enjoyable too. The cameras turned out to be a bit average, despite having such a large sensor. The G60 is also a bit on the heavier side, and charging such a large battery is relatively slow.

The Realme 8 Pro had some big shoes to fill, considering the Realme 7 Pro was a pretty solid offering and continues to find a spot on this list. The lower starting price of Rs. 17,999 definitely works in its favour along with other positives such as very good battery life, fast charging, a sharp and vivid AMOLED display, and a pretty decent selfie camera.

However, although this is supposed to be the successor to the Realme 7 Pro, the company has gone in a different direction and so it’s missing a few features. You lose the stereo speakers, which we think is a big miss. There’s no high refresh rate for the display, and despite having a 108-megapixel camera, its performance is still underwhelming. Not to mention the spammy nature of some of the pre-installed apps in Realme UI 2.0, which can be pretty annoying. It’s still a good offering overall, just not what we expected.

The Redmi Note series has always stood for value, offering features that are a step or two up from the Redmi series while still remaining affordable enough for most people. The Redmi Note 10 Pro Max raises the bar by offering segment-leading features such as a 120Hz Super AMOLED display, a 108-megapixel main camera, a massive battery, and stereo speakers. It’s a powerful smartphone too thanks to the Qualcomm Snapdragon 732G SoC. In our review, we found the display to be excellent. The surprisingly useful macro camera, stylish design, and IP53 rating for dust and water resistance are also big selling points.

A few areas that we feel could improve with future software updates are the low-light camera performance, and the annoying bloat and promotional content in the software that we experienced at launch time. We also need to give a quick shout-out to the Redmi Note 10 Pro, which is basically identical to the Redmi Note 10 Pro Max except for its lower-resolution main rear camera, and is priced lower by Rs. 3,000.

One of the goals for the Realme Narzo 30 Pro 5G was to be the most affordable 5G smartphone in India, and it is. With a starting price of Rs. 16,999, it features MediaTek’s Dimensity 700U SoC which we generally see in phones costing well above Rs. 20,000. Other things working in its favour include very good battery life and fast charging, a 120Hz display, and snappy overall performance.

The Realme Narzo 30 Pro 5G does have the known issue of subjecting you to unwanted notifications from its stock apps, which can get annoying quickly. We also found low-light camera performance to be a bit lacking, and the overall design is a bit too bland for our taste given Realme’s propensity for offering patterns on the backs of its phones.

The Realme X7 5G was the company’s most affordable 5G phone until the Narzo 30 Pro 5G came along. The X7 5G is designed to offer a premium experience without costing a lot, almost a “flagship killer”, if you will. Powered by the MediaTek Dimensity 800U SoC and with the option of a swanky colorway that’s sure to get you noticed, it offers strong overall performance, great battery life with fast charging, and most importantly, good value for money. It’s also a light and compact smartphone which isn’t something we see a lot of these days.

Realme UI can get spammy real quick, if you haven’t already unchecked the necessary boxes in the stock apps. We also found the low-light camera performance to be a bit on the weaker side.

Infinix has launched a number of interesting new phones of late. One its more unique ones, the Zero 8i, is worth considering in this budget segment. Some of its strong points include a snappy MediaTek Helio G90T SoC, a 90Hz display refresh rate, and a set of cameras that work well provided the light is good. It also boasts of a rather unique design on the back, which helps it stand out from the competition. It’s one of the few phones in this segment to offer an ultra-wide-angle selfie camera, which we hope to see others adopt.

A few things worth noting are that it is a little big and unwieldy, there is lots of preinstalled bloatware, and the camera focus was a bit iffy at times with close-up shots. If you’re looking for something other than a Xiaomi or a Realme, we think it’s worth a look.

The Realme 7 Pro has some compelling features such as an AMOLED display, 65W fast charging, and stereo speakers, and continues to be a good choice in this segment. The phone is also fairly slim and light, which is a nice bonus. It runs on the Qualcomm Snapdragon 720G SoC, so performance is more than good enough for everyday use.

The primary rear camera is quite decent too. While the Realme 8 Pro has now been launched, this model still offers great value for money.

The newest launch on our list, you get a lot of CPU power with the iQoo Z3 thanks to its Snapdragon 768G SoC, which is currently not found in any other phone. Its starting price is just under our budget cutoff, and while you get 6GB of RAM with 128GB of storage for Rs. 19,990, it costs only Rs. 1,000 more to buy this phone with 8GB of RAM instead, and you can bump the storage up to 256GB for Rs. 22,990. The 6.58-inch full-HD+ screen has a 120Hz refresh rate, and the 4499mAh battery can be charged quickly using the included 55W adapter. You might not like the plastic back, and camera performance could use some improvement, but the features and specifications are hard to pass up at this price level.

The mid-range Poco X3 is based on the Qualcomm Snapdragon 732G SoC, and boasts of a 6,000mAh battery as well as a 6.67-inch full-HD+ display. This phone is relatively bulky and heavy but the design is relatively fresh, with a very prominent camera module on the back. You do get IP53 water and dust resistance.

Performance is good overall, and so is battery life. This is a good option for gaming and entertainment. The cameras are also adequate for everyday use. If you don’t mind a slightly bulky smartphone, the Poco X3 still offers plenty of value for money.

Is OnePlus 9R old wine in a new bottle — or something more? We discussed this on Orbital, the Gadgets 360 podcast. Later (starting at 23:00), we talk about the new OnePlus Watch. Orbital is available on Apple Podcasts, Google Podcasts, Spotify, and wherever you get your podcasts.

The resident bot. If you email me, a human will respond.
More