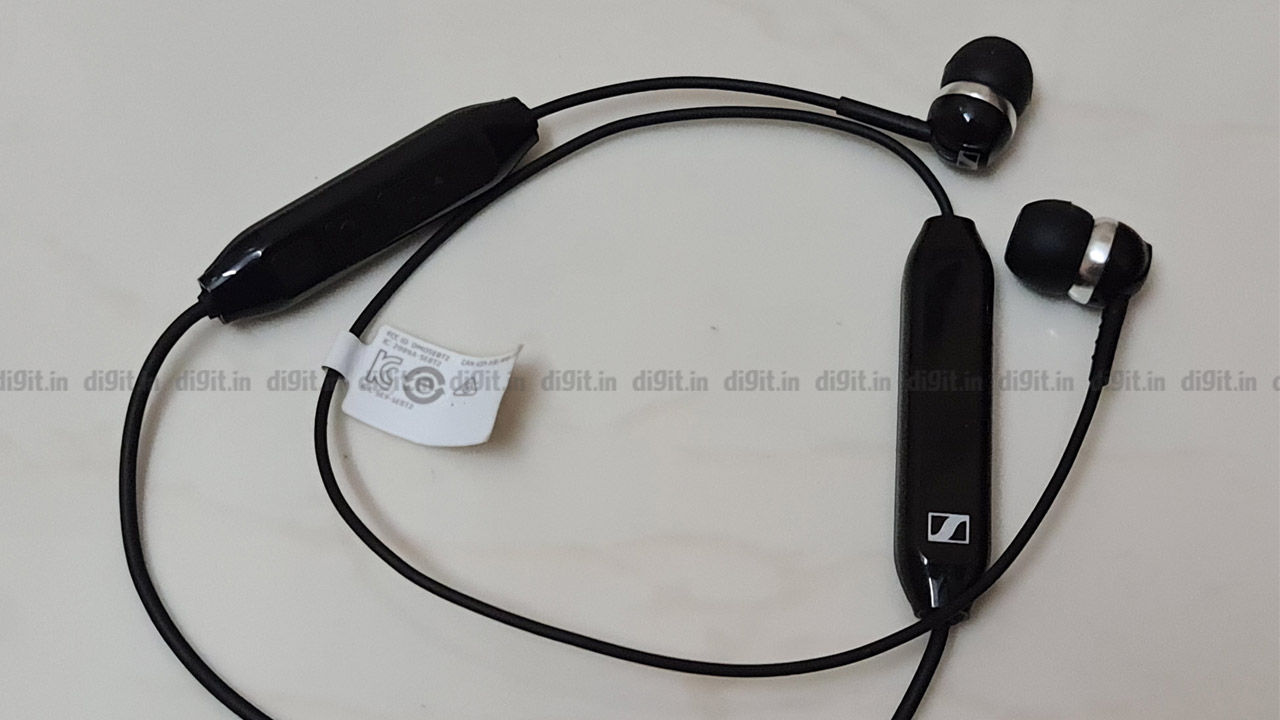 Sennheiser is well-renowned for their premium in-ears or headphones that are usually well-received by audio critics and users alike. The Sennheiser Momentum True Wireless won the Digit Zero1 award for the best performing true wireless earphone in 2019, and the version 2 that the company launched this year also boasts solid sound quality. These headphones and earphones also come with impeccable build quality and design. The Sennheiser CX 150BT Wireless is a pair of mid-range wireless Bluetooth in-ear headphones that are priced just under 5K. Let’s see if these earphones manage to impress us as thoroughly as Sennheiser’s more premium offerings have, time and again. 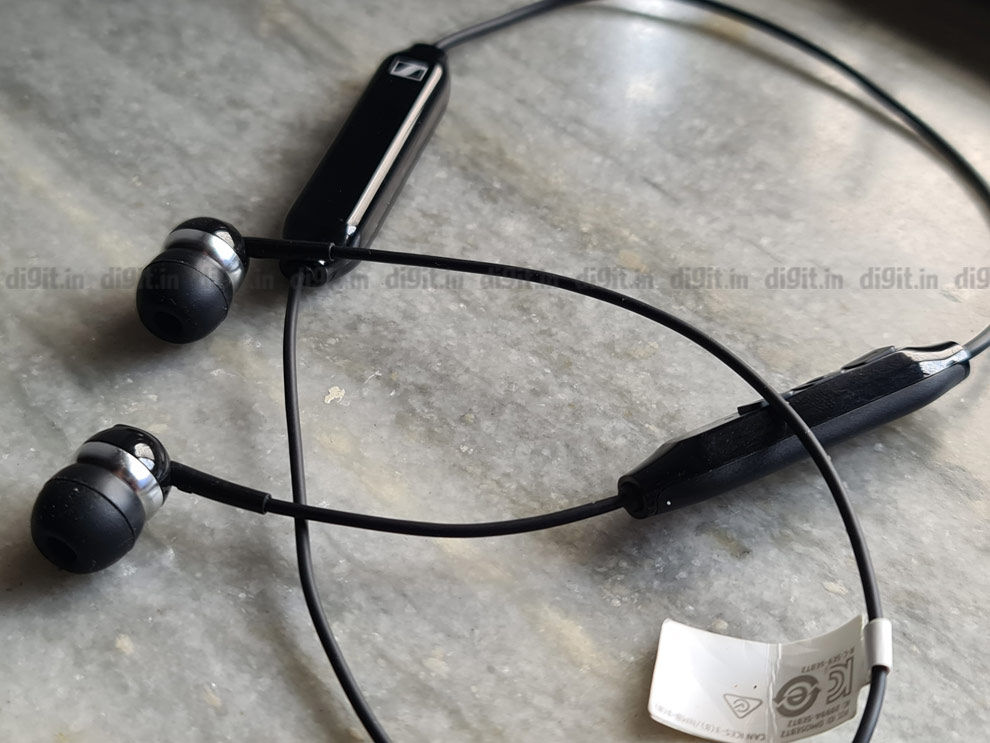 The Sennheiser CX 150BT certainly boasts design accents and stylistic choices that are associated with Sennheiser products, but they’re much more understated on this product. The earphones feature a glossy-black finish on the buds and on one side of both plastic modules (weighted boxes consisting of the battery) . The other side of the plastic modules come with a matte finish. These are wireless in-ear headphones that can be worn in the neckband-style, albeit they’re missing the part-stiff, part-flexible neckband that is usually present on wireless earphones. 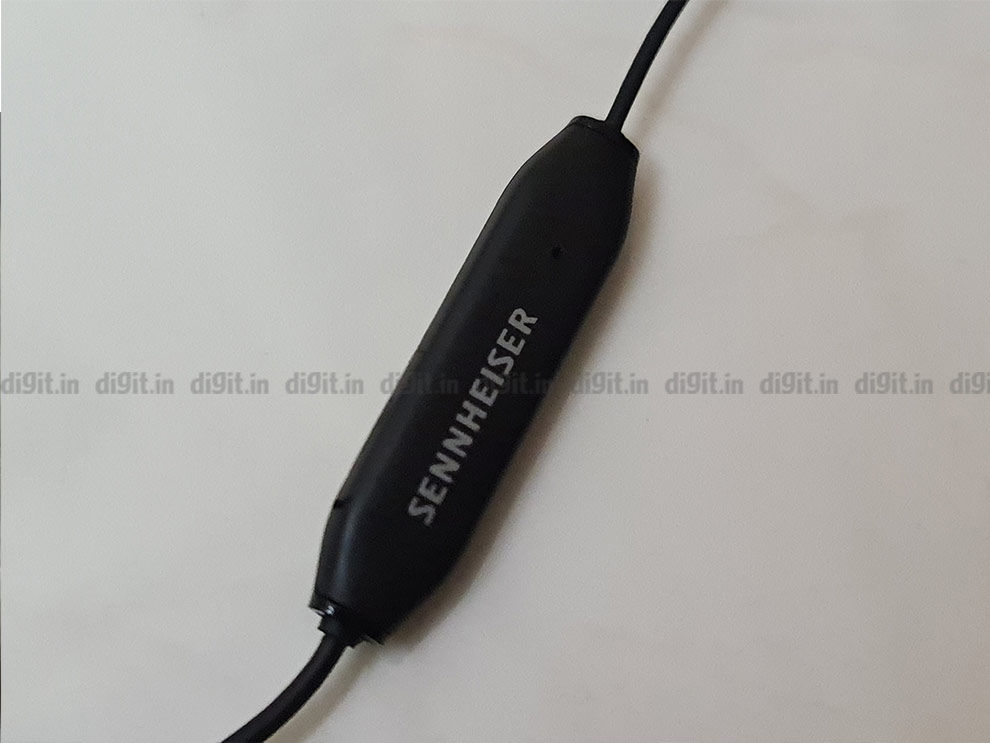 The cables hang loose in this case, and the weight of the plastic modules often cause the buds to get tugged out of the ear from one side or the other. Oddly, one module is positioned in such a manner where it rests at the nape of your neck, while the other sits in the more traditional position, at the side of your neck. The unconventional placement caused the unit to feel wonky and unbalanced, which negatively impacts the overall structure. 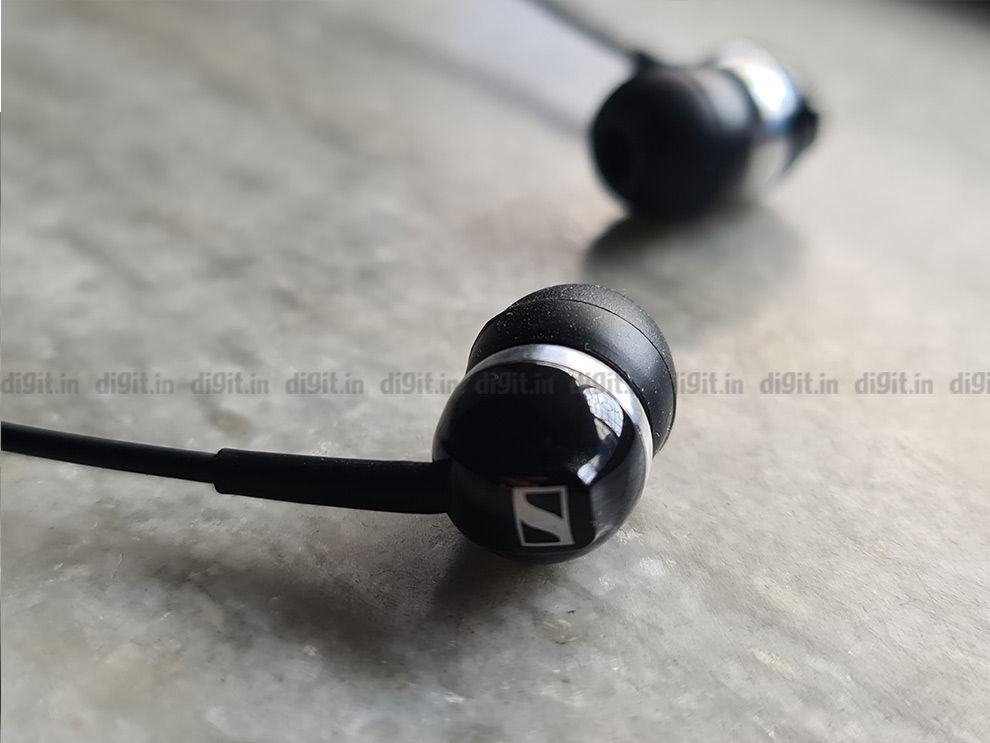 Nevertheless, the materials used are still pretty solid and robust. The plastic modules don’t feel cheap and rickety, the three-button control system has tactile and responsive buttons, and the earbuds themselves are lightweight and ergonomic, allowing users to wear them without any overbearing comfort for hours on end. The buds also create adequate amounts of seal, resulting in good passive isolation. Unfortunately though, the unit misses out on nifty magnetic modules that are usually present on wireless neckband earphones. When not in use, the earbuds just dangle off your chest loosely, which just doesn’t feel as secure as earbuds with magnetic housings that securely attach to each other. 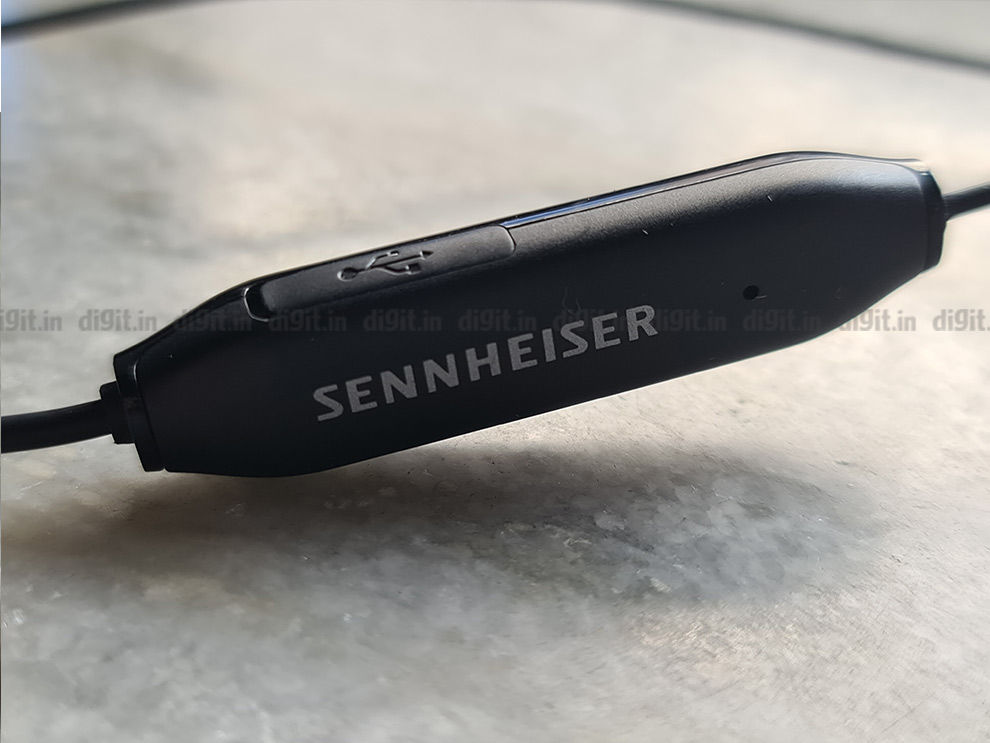 The company has provided 3 additional pairs of silicone eartips – XS, S, L (The M size is already on the buds), which allows users to get as close to a perfect fit as possible. In the box, you also get a Type-C charging cable. The Type-C port on the earphones are tucked under a plastic flap on the right-side plastic module.

Overall, the earbuds are lightweight and ergonomic, however, the odd placement of the modules do cause the buds to feel unstable in the ears, at times, and the lack of magnetic housings on the buds is also disappointing. The design is understated and minimalistic, however, it is marred by some of the build issues we have mentioned above.

The Sennheiser CX 150BT Wireless earphones aren’t exactly a feature-laden pair of wireless earphones, and they miss out on some integral features that are expected in the 5K price range. Let’s start with the good. Powered by Bluetooth v5.0, the earphones feature solid connectivity and good wireless range. We could go from one end of the apartment to the other, without being disconnected from the source device and the connection can also pass through a wall or two. There’s support for the AAC and SBC codecs, however, the earphones do miss out on aptX codec support which some wireless earphones in this price range do have. 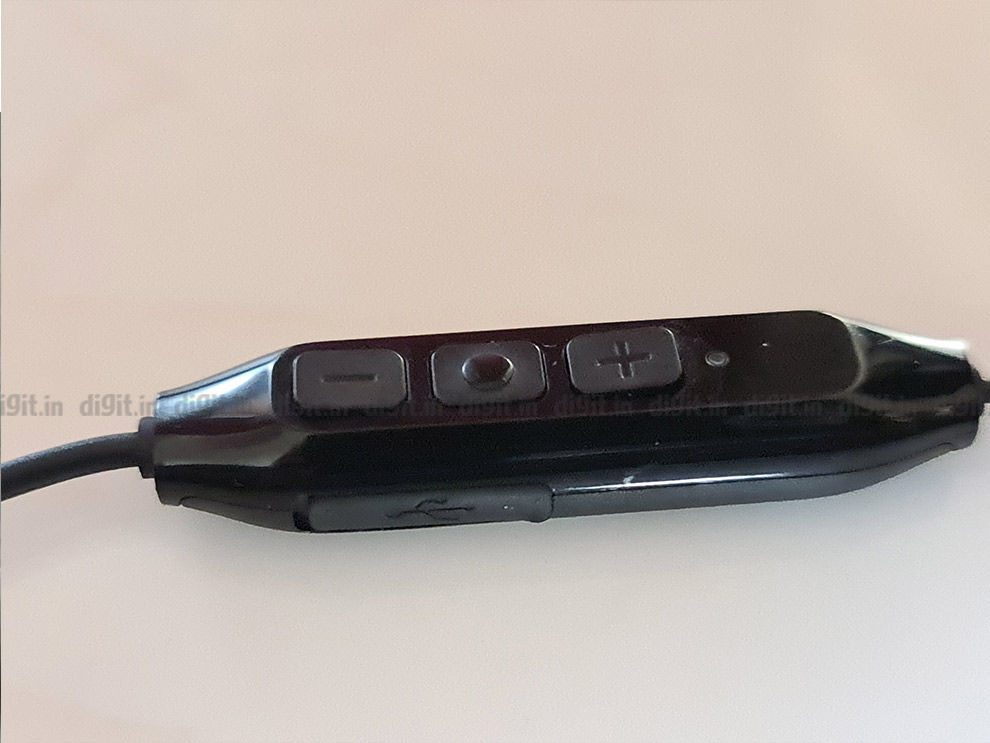 The control system on the CX 150BT allows users to control media and calls. The middle multifunction button, however, just feels overworked since it is used to perform pause, play and track seeking functions. Pressing the button once pauses/plays the music, a double-press takes you to the next track, while a triple-press takes you to the previous one. We personally strongly dislike any triple-tapping commands, here at the Digit test labs, since they inadvertently fail by either not registering at all or performing the task assigned to the double-tap. The plus and minus buttons simply control the volume by single taps. We’d prefer it if the track seeking controls were placed here instead, allowing users to either double-tap or long press to go to the next and previous tracks. Also, the earphones don’t have any control to summon voice assistants which is just absurd in 2020.

The earphones also lack any sort of IP rating, so even though the earphones fit in the ear pretty snugly, we’d suggest that you steer clear of using these in the gym or while jogging/running, since sweat may cause the earphones to get damaged. Additionally, the earphones also do not lend to a favourable experience during intensive workouts or activities since the earbuds often get pulled out of the ears due to the unbalanced placement of the plastic modules.

Oddly enough, the earphones do connect to Sennheiser’s Smart Control app, however, there’s absolutely nothing you can do in the app once you’ve connected the buds to it. You can’t even see the battery percentage of the earphones on the app. 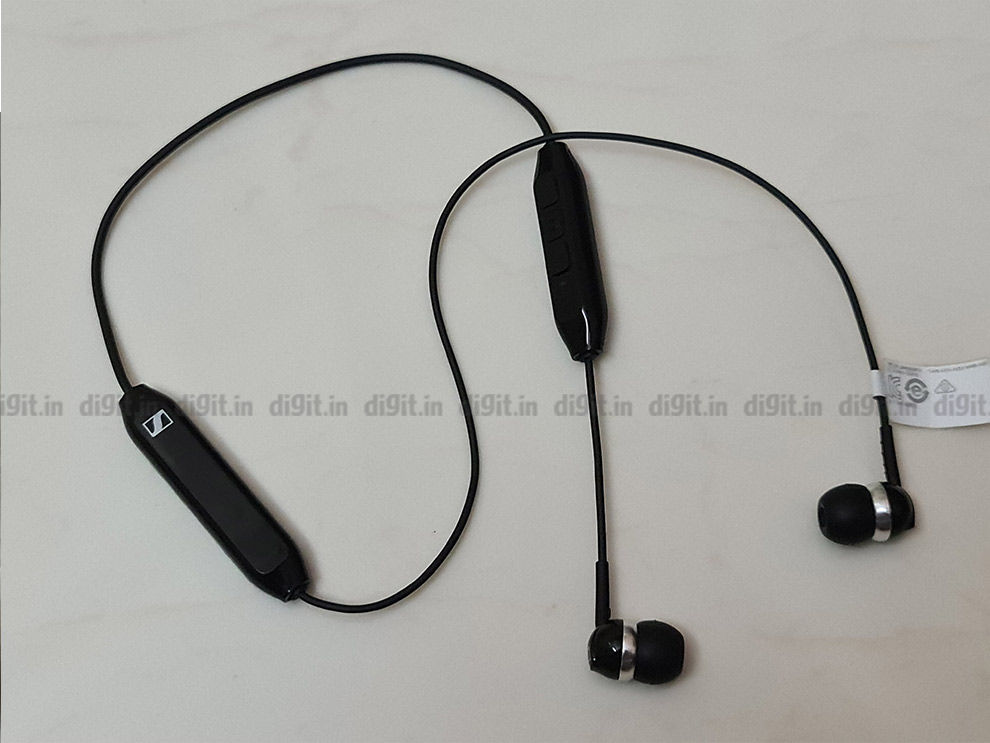 The earphones, however, do have one redeeming feature which is the fantastic battery life. The company rates the battery life at a solid 10 hours and in our tests, at 60-70 percent volume, we were able to extract well over 10 hours worth of juice! You can easily go 2-3 days between charges even if you listen to music for a good 3-5 hours a day, which is impressive.

The Sennheiser CX 150BT sports an A-shaped sound profile that shines when it comes to reproducing the mids. In an A-shaped sound profile, the lows and highs are usually slightly suppressed while the mids are slightly extended, which is the case on these earphones. This is not to say that the bass response is severely lacking. It’s definitely got some punch and depth, without being overwhelming. However, if you’re a basshead, you might find the bass response to be a bit inadequate for your tastes.

Now, coming to the mids, the Sennheiser CX 150BT really soars here. Vocals, especially male ones, have ample amounts of clarity and sparkle. Female vocals can sound a tad tinny on higher volumes, but it’s not too jarring. In songs such as Pull me Under by Dream Theatre and Selkies by BTBAM, the vocals and lead instruments sound exquisite, almost as good as on the more expensive Sennheiser Momentum True Wireless 2. However, the bass guitar and drums in both these tracks sound dull and unenergetic. 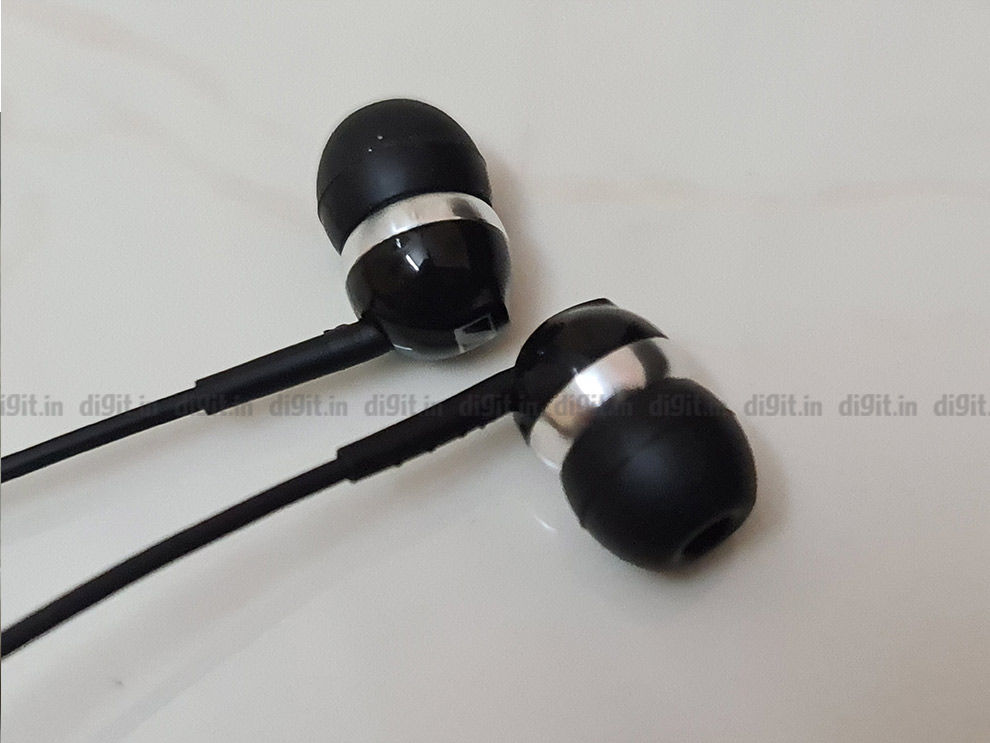 The earphones seem to be best suited for vocal-centric tracks, and pop songs rather than rock and EDM. Nevertheless, they’re not disappointing for those genres as well. Overall, these are one of the better sounding earphones under 5K and most users will be more than pleased with the sound quality (apart from bass lovers, maybe).

Coming to the microphone quality, we were impressed with the mic’s intelligibility. We tried dictating a paragraph in the notes app by voice and the app was able to pick up most words accurately. For calls, the microphone does a pretty decent job as well. The voice is clear and doesn’t sound muffled or distant to the receiver.

The Sennheiser CX 150BT is a great-sounding pair of wireless earphones under 5K that is marred by the absence of some integral features and some build flaws. If you don’t mind the absence of voice assistant support and an IP rating, and if you deem the design to be good enough for you, there aren’t too many wireless earphones in this price range that sound as good as the Sennheiser CX 150BT. However, if you’re a basshead, you’d have to look elsewhere to satiate your bass needs.