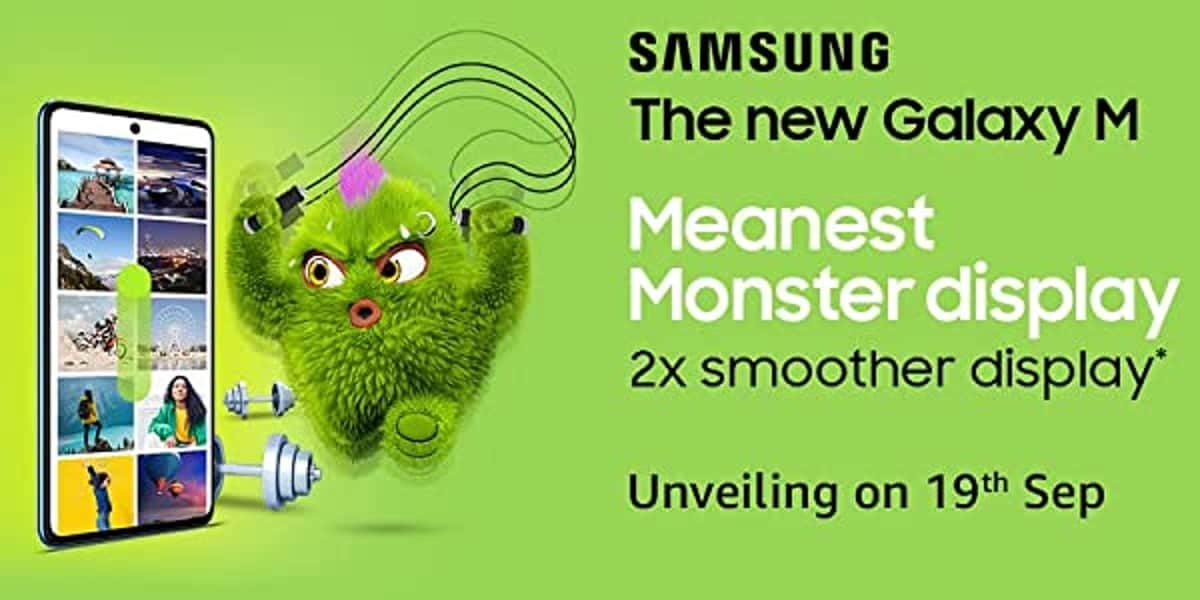 Samsung Galaxy M52 5G launch date in India is set for September 19, according to an Amazon teaser. The new Samsung phone will come as the successor to the Galaxy M51 that was launched last year. It is rumoured to have a 120Hz display and a Qualcomm Snapdragon 778G SoC to deliver an upgraded experience. The Samsung Galaxy M52 5G is also teased to come with triple rear cameras and sport a hole-punch display design. The smartphone is expected to arrive in at least three distinct colour options.

Amazon posted a teaser image on its mobile website and app to suggest the launch date of the Samsung Galaxy M52 5G in India. The image doesn’t explicitly say Samsung Galaxy M52 5G model but just ‘The new Galaxy M’, though the image file name is “SamsungGalaxy_M52_5G_Mob”, which gives us a clear indication of what Samsung is launching in the country.

Update: Samsung India confirmed to Gadgets 360 that the official launch isn’t happening on September 19. It’s not clear what to expect given Amazon still has the banner on the site, but it is possible that the e-commerce site may reveal some features of the upcoming phone on the given date.

The listing on the Amazon site also claims that the new Samsung Galaxy M-series phone will feature a 21 percent sleeker design, 55 percent improved CPU performance through a “flagship” Snapdragon processor, and two times smoother display for scrolling and viewing. The phone is also teased to have 5G support on 11 bands.

Earlier this week, Amazon teased the launch of the Samsung Galaxy M52 5G by creating its microsite. Some renders purportedly showing the smartphone also appeared online.

Samsung has not yet revealed any details about the Galaxy M52 5G. However, the rumour mill has suggested some of its specifications. The smartphone is said to run on Android 11 with One UI 3.1 on top and feature a 6.7-inch full-HD+ (1,080×2,400 pixels) Super AMOLED display with Corning Gorilla Glass 5 protection and a 120Hz refresh rate. The Samsung Galaxy M52 5G is also reported to have a Qualcomm Snapdragon 778G SoC, along with 6GB and 8GB RAM options as well as 128GB of onboard storage.

For photos and videos, the Samsung Galaxy M52 5G is said to have a triple rear camera setup at the back, with a 64-megapixel primary sensor, a 12-megapixel wide-angle shooter, and a 5-megapixel macro shooter. The phone is said to come with a 32-megapixel selfie camera sensor at the front.

Samsung is reported to offer a side-mounted fingerprint sensor on the Galaxy M52 5G. The phone is also said to have 164x76x7mm dimensions and 175 grams of weight.