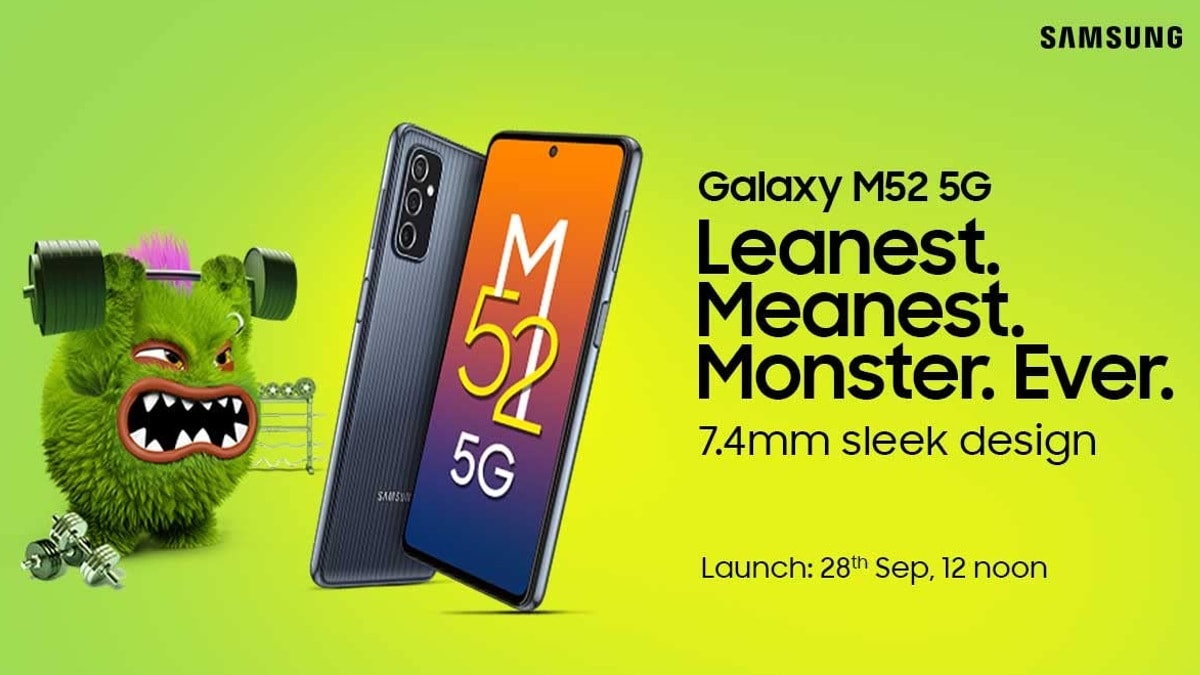 Samsung Galaxy M52 5G India launch date is set for September 28. Last week, Amazon had suggested that the new Samsung phone would launch in the country on September 19. That launch date, however, turned out to be inaccurate. Amazon has now updated its listing with the new launch date for Samsung Galaxy M52 5G. Samsung has also separately confirmed the launch through its social media channels. The smartphone is teased to have triple rear cameras and a slim body. It will come as a successor to the Samsung Galaxy M51 that was launched last year.

Amazon on its dedicated microsite has featured a teaser image to show that the Samsung Galaxy M52 5G launch in India will take place at 12pm IST (noon) on September 28. This comes as an update to the earlier listing that showed September 19 as the launch date. Samsung has also confirmed the launch date through a tweet.

Samsung Galaxy M52 5G is expected to go on sale through Amazon as well as Samsung India online store shortly after the launch.

The Galaxy M52 5G price in India is yet to be revealed. However, the phone appeared on a Polish retailer’s website with a price tag of PLN 1,749 (roughly Rs. 32,900) for the 8GB + 128GB storage variant. It was also listed in Black, Blue, and White colour options.

On the specifications front, Samsung Galaxy M52 5G will come with triple rear cameras, hole-punch display, and a side-mounted fingerprint sensor, as per the teaser images posted online by Amazon and Samsung. The phone is also teased to have a 7.4mm of slim build — thinner than last year’s Samsung Galaxy M51 that came with a 9.5mm thickness.

Samsung is yet to reveal other details about the Galaxy M52 5G. Nevertheless, the listing on the Poland retailer’s site suggested most of its specifications. The phone appeared with One UI, based on Android 11. It was listed with a 6.7-inch full-HD+ (1,080×2,400 pixels) Infinity-O Display, along with a 120Hz refresh rate and a 20:9 aspect ratio. It also seemed to have an octa-core Qualcomm SM7325 (Snapdragon 778G) SoC, coupled with 8GB of RAM.

The upcoming Samsung Galaxy M52 5G may also include a 64-megapixel primary camera sensor, along with a 12-megapixel ultra-wide shooter and a 5-megapixel macro shooter. It is also listed with a 32-megapixel selfie camera sensor.

Samsung would provide all common connectivity options on the Galaxy M52 5G that include 4G LTE, Wi-Fi, Bluetooth, and a USB Type-C port. The phone also appears to have 5G as well as NFC support. Further, it is expected to include a 5,000mAh battery and weigh 175 grams.