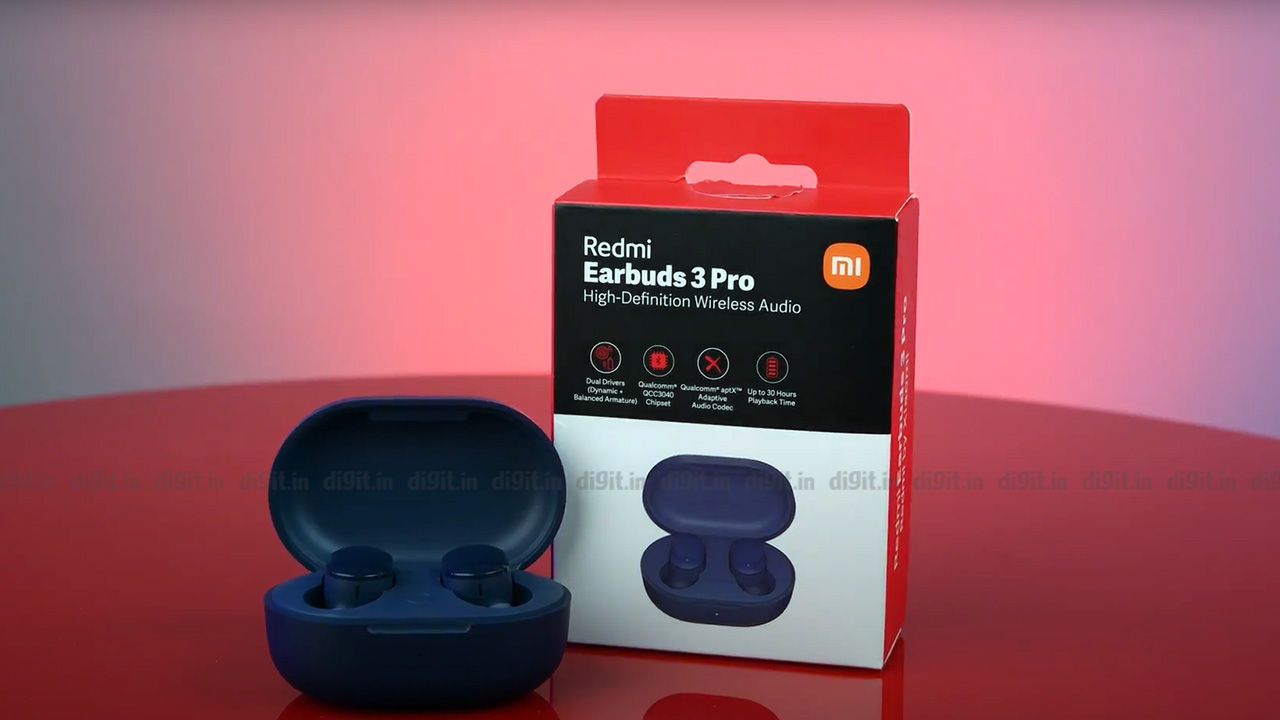 Redmi is well-known for its value-for-money products that provide eye-catching specs without putting a large dink in your wallet. The latest audio product from the company is the Redmi Earbuds 3 Pro that is essentially the Redmi AirDots 3 that launched in the international market. The Earbuds 3 Pro is priced aggressively at Rs 2,999 and it competes against the likes of the Realme Buds Air 2 and the OnePlus Buds Z. On paper, the Redmi Earbuds 3 looks like an imposing contender in the entry-level TWS segment since it not only comes equipped with a dual-driver setup but also supports the aptX Adaptive codec, which is almost unheard of at this price range in TWS earphones. So, does the performance match up to the impressive specifications? We’re going to find out in this review.

The Redmi Earbuds 3 Pro house a dual driver setup consisting of one dynamic driver and one balanced armature driver. Essentially, the dynamic driver takes care of the low end of the frequency range while the Balanced armature drives the high end. This usually means better separation and usually, more detailed sound. The earbuds support SBC, aptX and aptX Adaptive codecs, there’s no AAC codec support so iPhone users will have to make do with SBC. 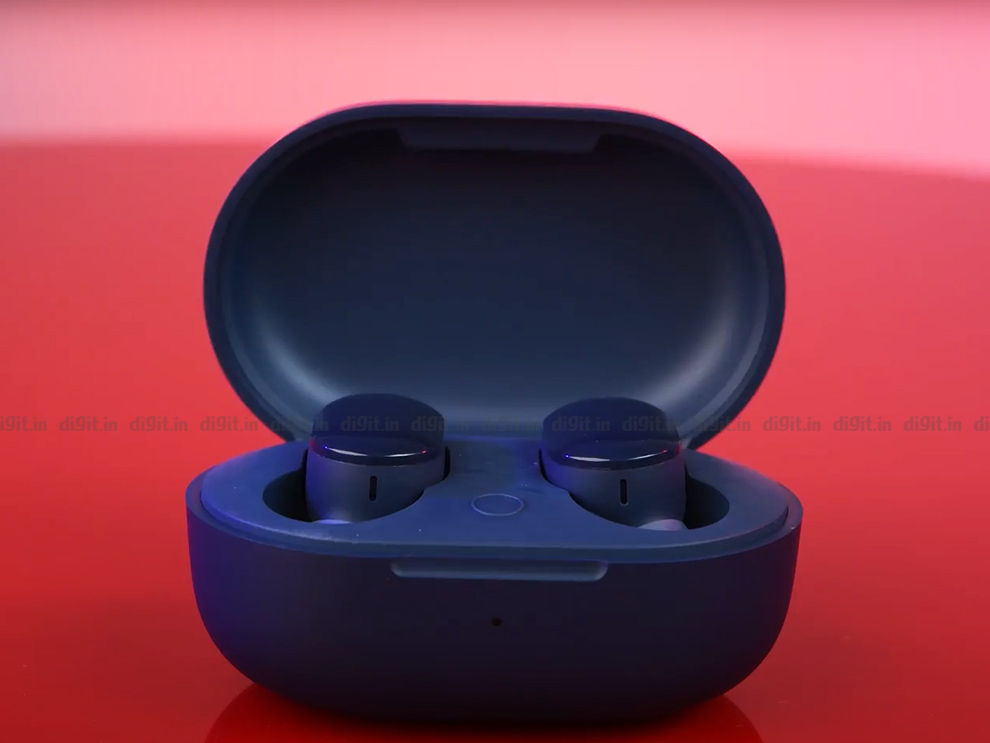 Now, the Redmi Earbuds 3 Pro definitely has impressive separation, good imaging and a detailed soundstage but the tuning can really use some work. The bass response is way too bloated and as a result, the mids and highs get very little prominence in the mix. To objectively test the sound signature, we use a measurement microphone from iSEMcon connected to an adapter from SLS audio specifically made to test earphones. For our audio interface, we use the Focusrite Scarlett 2i2. All of this is hooked up to a PC running the SMAART Di v2 software that generates frequency graphs for earphones.

In the frequency graph that was generated for the Redmi Earbuds 3 Pro, you can clearly see that the frequency range up until 350Hz is massively boosted, especially in the sub-bass region. The mid-range and highs are pretty muted in comparison, although there is a slight jump from 1kHz to 4kHz that brings some presence to that part of the frequency range. Overall, this sound signature sounds dark with muddy bass and muted mids and highs even when listening using the aptX codec. The bloated bass response causes massive auditory masking in the mids, so vocals and lead instruments are relegated to the background of the mix.

The treble response is not as refined as we’d like it to be as well, considering the device has a balanced armature driver. The highs have a decent amount of detail when not being masked by the bass but the roll-off is too abrupt. So, even though the earphones have good separation and imaging, it’s very hard for us to recommend these earphones over something like the Realme Buds Air 2 since they are tuned much better and have a more agreeable sound for most genres of music. The Redmi Earbuds 3 Pro sound decent enough when listening to genres such as EDM, rap, pop and hip hop, but they especially don’t cut it for genres such as rock and classical. In rock tracks, the kick drums sound boomy and shroud instruments such as cymbals and hi-hats. Even in pop songs, the bass response takes away the focus from the vocals.

Moving on to microphone performance, we were actually pleasantly surprised in this department. Even though the buds don’t have long stems, the voice quality was better than the Realme Buds Air 2 and the OnePlus Buds Z. Our voice sounded pretty natural and was clear, however, ambient sounds were picked up pretty easily by the microphone. So, if you’re in an area with traffic, those car honks are definitely getting through. 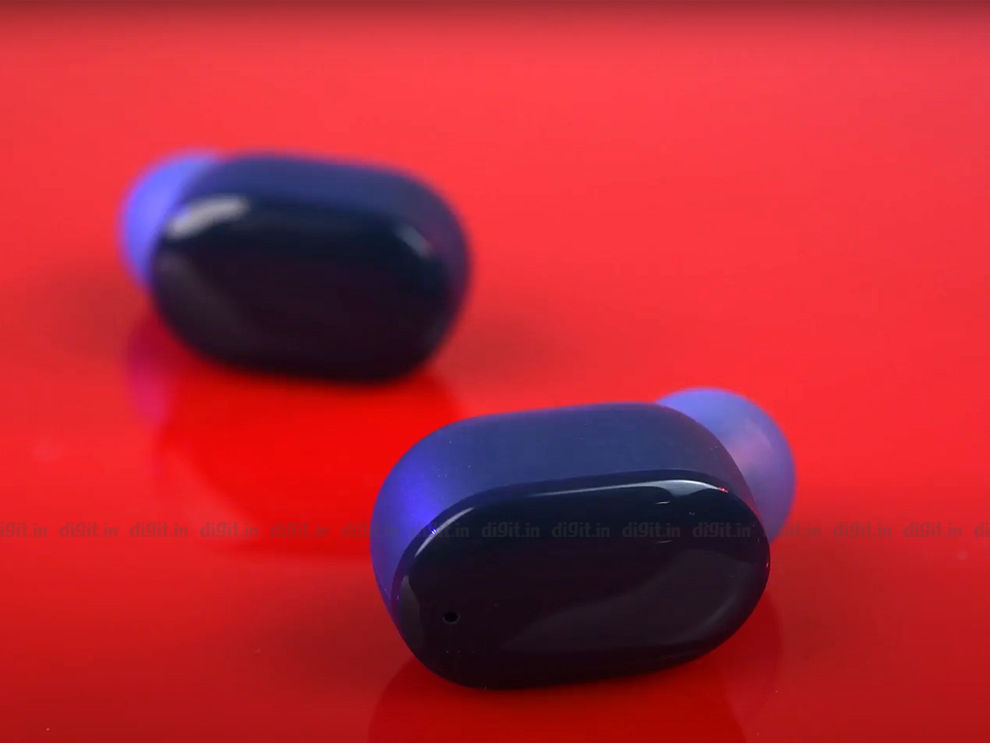 The Redmi Earbuds 3 Pro come with Bluetooth 5.2 wireless connectivity. We faced some issues like occasional stutters in the audio, especially in the left earbud. At times, the stutters would last for really long and would only go away if we put the buds in the case and then took them out again, which is really disappointing. This happened when using aptX codec as well. The Redmi Earbuds 3 Pro also come with Fast Pairing for Xiaomi phones with MIUI 12. Other phones will have to follow a more conventional pairing process.

After pairing, subsequent connections are pretty much instantaneous as soon as you open the case and pull the buds out. We would have preferred it if Redmi had gone for Google’s Fast Pair protocol though so that all Android devices could benefit from it, like on the Realme Buds Air 2. The earbuds also come with latency as low as 86ms for gaming. When we played games or streamed content, we noticed only slight latency, most people won’t be bothered by it.

Overall, the Redmi Earbuds 3 Pro hasn’t impressed us with its performance. The sound signature is too dark and bass-biased and the wireless connectivity is spotty. We’d recommend the Realme Buds Air 2 or the OnePlus Buds Z over these when it comes to performance.

The Redmi Earbuds 3 Pro cannot compete with the Realme Buds Air 2 when it comes to features due to the lack of Active Noise Cancellation and Realme Link app support. It does come with a fair number of features, however, companies like Realme and OnePlus offer a larger feature set for around the same price. While the OnePlus Buds Z does not come with ANC, it does have HeyMelody app support to tweak the earbuds’ settings. You get touch controls on the Redmi Earbuds 3 Pro, however, you cannot customise them due to the lack of an accompanying app even on Xiaomi phones. 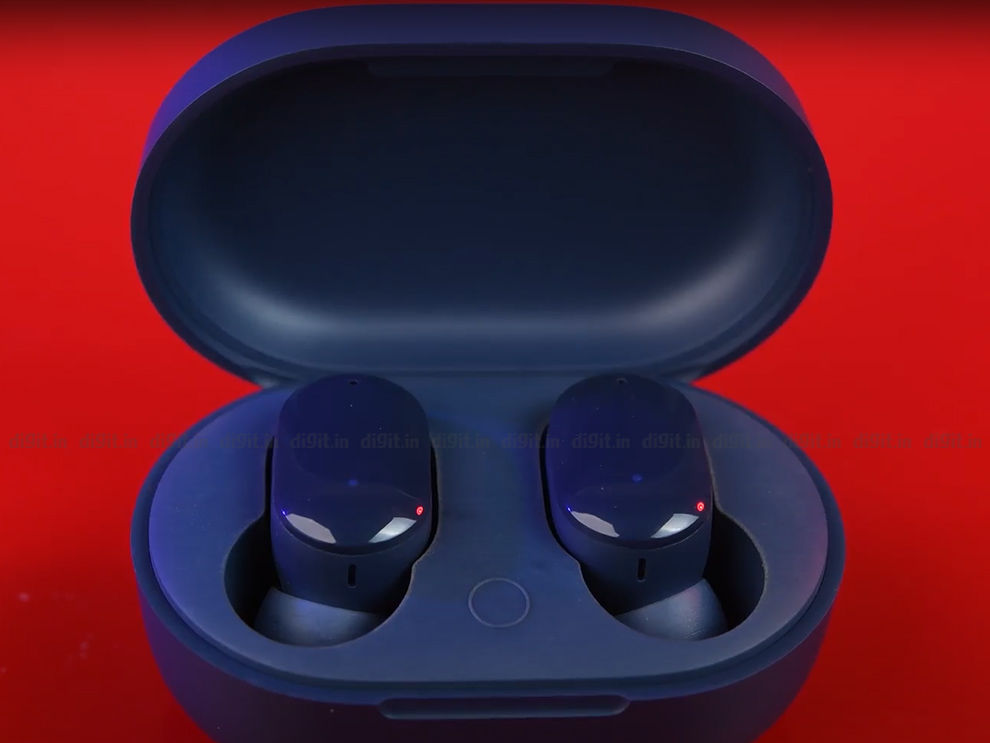 We reached out to Xiaomi and they said that they were evaluating bringing a dedicated app for their audio devices, and we really hope they do. The touch controls are tricky and not very intuitive, a double-tap on the right pauses/plays music, a double tap on the left invokes voice assistant, and touching and holding the right or left earbud plays the next track or goes to the previous track respectively. You can also answer calls by double-tapping either bud. There are no volume controls, which is disappointing. 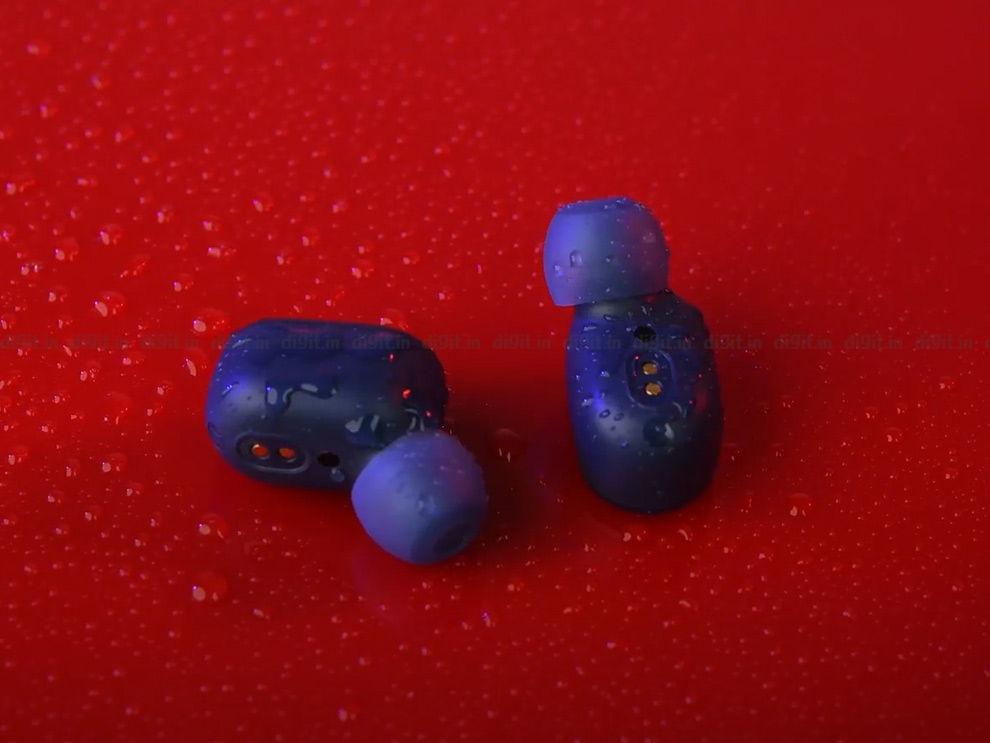 Other features include IPX4 water resistance, 86ms low latency gaming, mono bud use where you can use either bud independently of the other, and in-ear detection. In-ear detection pauses music automatically when a bud is removed from the ear and resumes music when it is put back in. This feature worked excellently during our testing process. Overall, these earbuds aren’t exactly feature-rich and other buds such as the Realme Buds Air 2, the OnePlus Buds Z and even the cheaper Realme Buds Q2 seriously undercut them when it comes to features.

If the Redmi Earbuds 3 Pro has one thing going for it, it has got to be the battery life. The buds are rated at 30 hours of total wireless playback time, with 7 hours on the earbuds alone according to the company. During our tests, we used the Redmi Earbuds 3 Pro with aptX codec active and at around 60-65 percent volume. The earbuds lasted 6 hours and 15 minutes on a single charge, which is pretty close to the company’s estimate. The charging case can top off the earbuds three times over and still have juice to spare, which is very impressive. The battery life of the Redmi Earbuds 3 Pro surpasses competitors such as the Realme Buds Air 2 that has 25 hours of total playback time, and the OnePlus Buds Z with its 20 hour playback time. 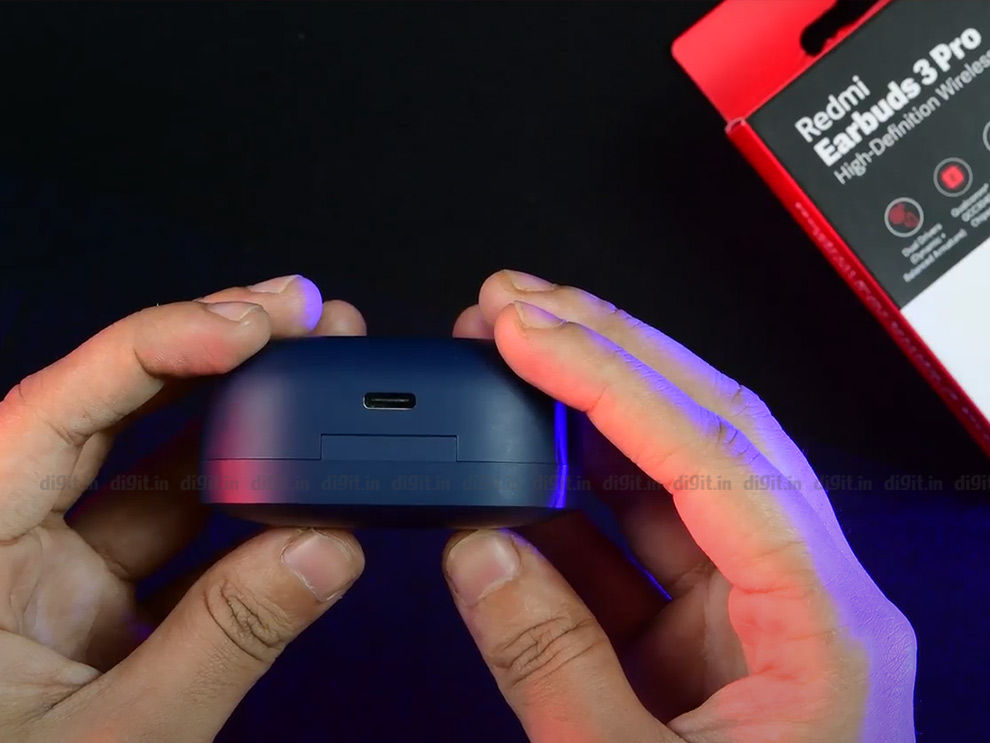 The earbuds have USB-C charging and are supposed to come with a USB Type-C cable in the box, but for some reason, it was missing in our review unit’s box. There’s no fast charging support, which is a shame. The case takes around 3 hours to fully charge from zero battery.

Sporting an oblong-shaped charging case with a matte texture, the Redmi Earbuds 3 Pro have a simplistic design language. These earphones are available in three colours – White, Pink and Blue. We got the blue variant for review and were pretty pleased with the colour. There’s nothing eye-catching about the case, there’s a simple Redmi logo on top and the matte texture is resistant to fingerprints but can get smudges and scratched. 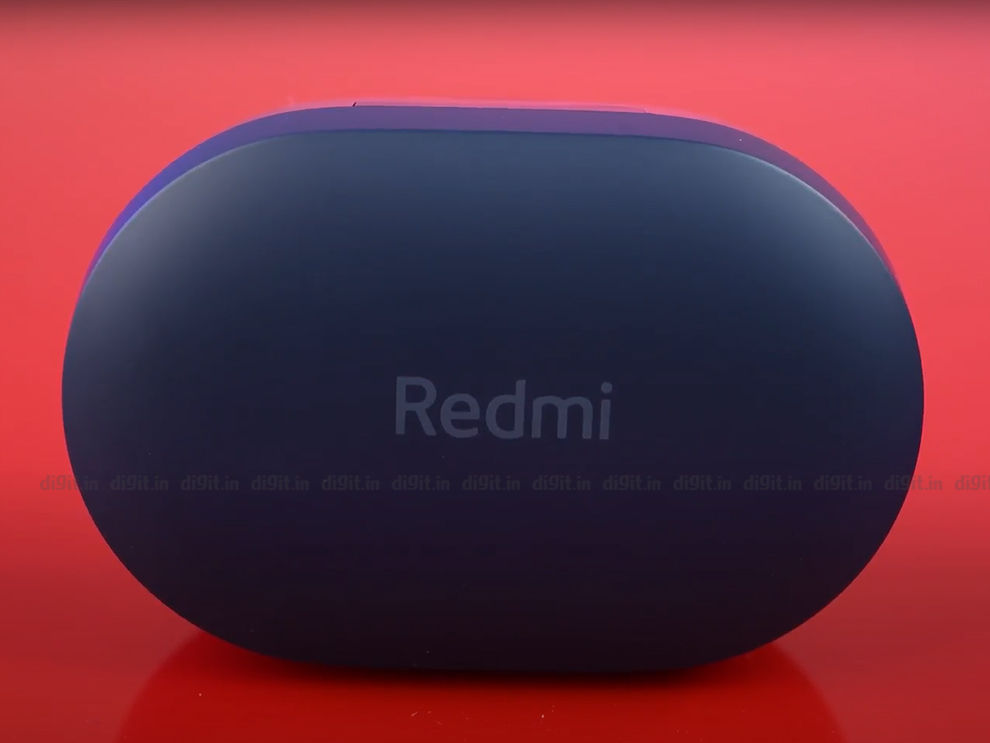 There’s an LED indicator on the front, a USB-C charging port at the back and a pairing button inside the case. The case has a pretty sizable footprint and looks pretty clunky, to be honest. We’re bigger fans of the pill-shaped compact case design or the cobble-shaped case design as seen on some of its competitors. The case can be opened one-handed relatively easily. Due to its larger size, it does bulge out of pockets significantly, especially if you’re wearing skinny jeans. The case’s hinge is very loose and feels very wobbly. The lid’s magnet is pretty strong though and shuts close audibly. 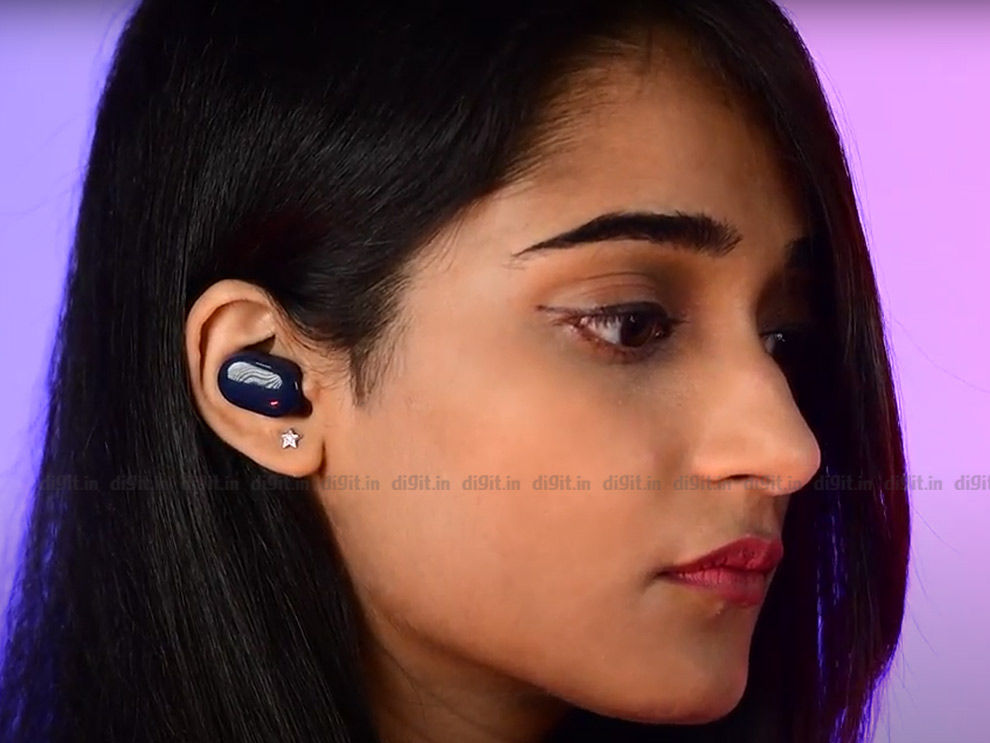 As for the earbuds, they also sport a larger footprint than what we usually see these days. The buds are pill-shaped and pretty bulky. The weight of the buds bulky outer portion causes some ear fatigue after a few hours of listening. However, the fit is snug and secure, with a good seal that blocks out a fair amount of ambient sound. The buds don’t shuffle too much or fall out when walking or exercising as well. 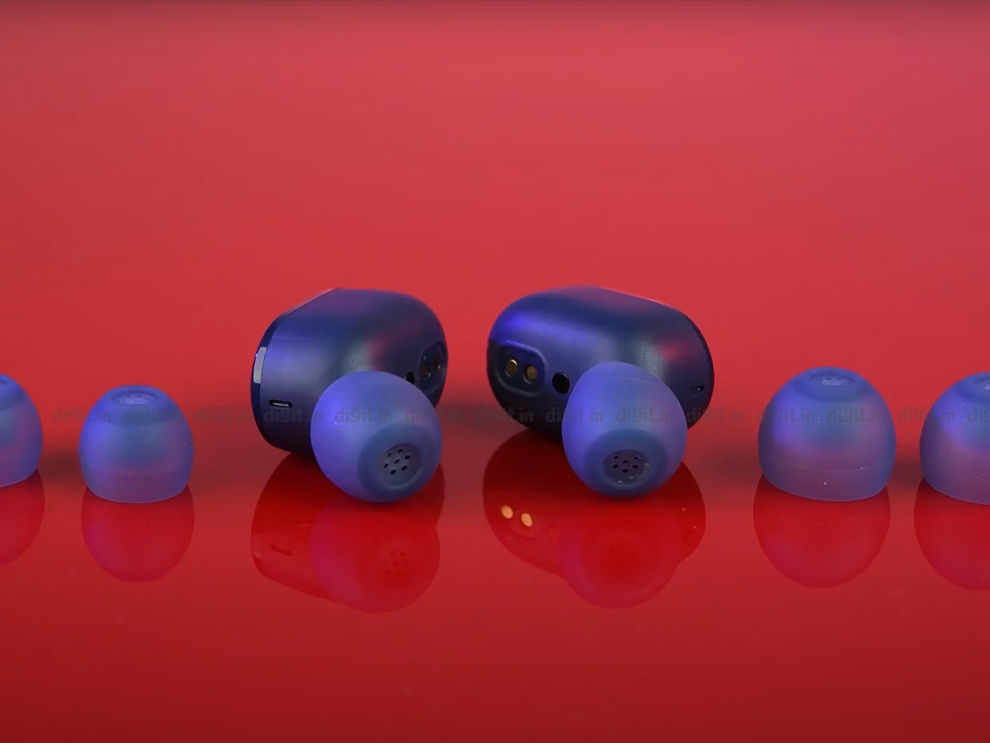 You get two extra sizes of silicone ear tips in the box to help you find a good fit. The buds have a glossy and matte dual texture that looks pretty decent. The glossy outer area is the touch-sensitive zone for controls and since the area is large, you can pretty easily hit the controls without too many misreadings. Overall, the case and the buds are on the larger side but the earbuds do have a good fit and look pretty decent as well.

Priced at Rs 2,999, the Redmi Earbuds 3 Pro attempts to make a case for itself with its dual-driver setup and aptX Adaptive Bluetooth codec support. While these specifications intrigued us, Redmi’s delivery didn’t land when it comes to performance. The buds have good sound separation and imaging, but the tuning needs some serious work. The lows sound very bloated and the bass-biased sound signature causes some serious auditory masking in the mids and even highs. The Redmi Earbuds 3 Pro struggles to find its identity. On one hand, it features a dual driver setup and high-quality codec support to appease the purists, and on the other hand, its bass biased tuning is targeted towards the masses. As a whole, it struggles to do either properly.

Additionally, the wireless connectivity is not stable enough, which is a problem. Although there are some things to like such as the impressive battery life, good microphone performance, and secure fit of the buds, other misses such as lack of app support, absent volume controls, and unintuitive controls make it very hard for us to recommend the Redmi Earbuds 3 Pro over competitors such as the Realme Buds Air 2, OnePlus Buds Z and the Realme Buds Q2.