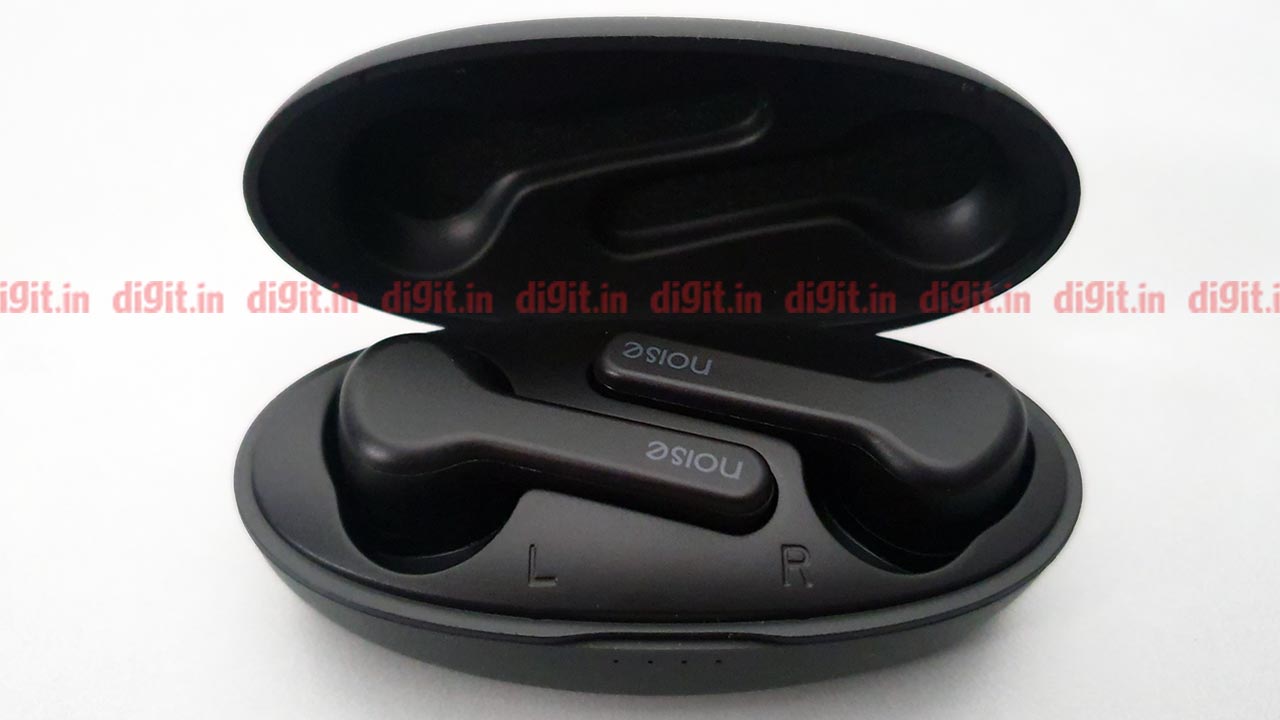 Audio startup, Noise, now coming into the limelight due to their lineup of proficient but budget-friendly audio solutions, has refreshed its line of wireless earphones with the launch of the Noise Shots X-Buds. With the true wireless segment in the audio industry being all the rage this year, consumers are abundantly showered with a slew of entrants in this elusive category across multiple brands – well-known and novel. The Shots X-Buds attempts to distinguish itself by means of “next-gen sound” and the desirable features. Let’s delve into how the newest Noise buds fare in our review.

The Noise Shots X-Buds deliver fairly competent sound quality. However, where they do trail behind is the bass response. In tracks such as Another One Bites the Dust by Queen or Uptown Funk by Bruno Mars and Mark Ronson, the bass thumps are rather muted which makes the entire track feel dynamically flat. Despite achieving a perfect fit with the S (small) sized ear tips, the bass response felt underwhelming. However, switching to AAC from SBT did result in fuller sound quality and deeper bass.

Mids and highs on the Noise Shots X-Buds sound sculpted and full-bodied. While electronic synth bass in Motherjane’s Mindstreet was slightly muted, most other instruments present in the track, were well-represented and well-preserved as well. The vocals also shine on these earphones, with the sibilant sounds in Billie Eilish’s Bad Guy sounding crystal clear and satisfying to the ears. The ‘s’ sounds and Billie’s sporadic breaths didn’t sound harsh or ‘hissy’ at any point, which is laudable. 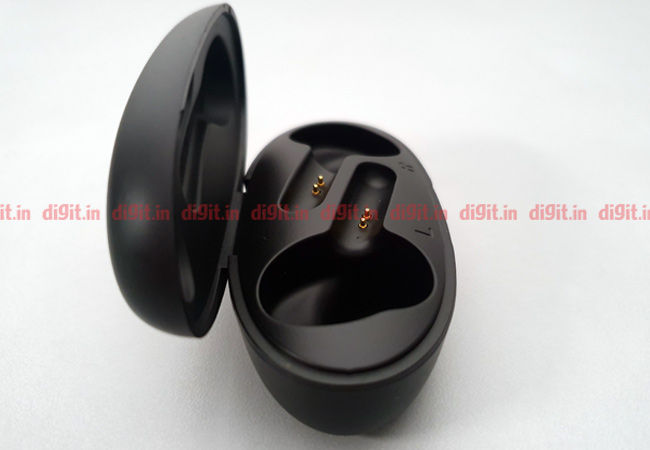 In Dream Theatre’s Pull Me Under, the array of instruments did sound accurate, however, the instrument separation seemed slightly lacking here. Spacing between the instruments was also inefficient which caused them to sound muddled when played on the Noise Shots X-Buds. However, we’re being extremely nitpicky here, since this is expected, especially in IEMs where the drivers press against your ear canals.

You also achieve a fair bit of noise isolation as well, owing to the snug fit of the IEMs in your ear. We couldn’t hear the constant chatter and the clicking of our mechanical keyboard in our test labs, which is great. Additionally, even with the music off, the surrounding sounds seemed to be quite diminished. Sound leakage was also minimal. We recorded a mere 50.9dB of leakage in our tests at 65 per cent volume.

Watching Netflix, YouTube and Hotstar using these earphones was a pleasant experience, and we did not face any major latency issues. We also played COD mobile, and the footsteps and shots were loud and clear. The stereo sound in-game was also commendable which we could pinpoint directional footsteps and gunshots.

Call quality on these earphones is strictly average. The microphone doesn’t seem to pick up your voice easily and the receiver often complains that the voice coming through is extremely muffled. The receiver’s voice, on the other hand, sounded quite clear.

Overall, the sound is detailed in mid-range and treble range, the vocals are clear and the bass is underwhelming, but not completely muted. The Noise Shots X-Buds are bright-sounding IEMs, and they’ve attempted to incorporate an audiophile sound profile onto these buds. They would have succeeded if the bass response was exaggerated just a tiny bit more. Nevertheless, the Noise Shots X-Buds are better than what you’d expect budget-friendly true wireless earphones to sound.

While the Noise Shots X-Buds come equipped with a plethora of features that are usually given the skip at this price point, some of them are still a bit of a hit and miss. Case in point, the built-in touch controls. 1More’s Stylish True Wireless earphones, which comes with a higher price tag, do not feature touch controls sticking to the more archaic single-button controls. The Noise Shots X-Buds’ touch controls allow you to control the volume, pause/play a track, skip tracks or go to previous tracks, launch voice assistant and, accept and reject calls.

Despite the array of touch-enabled controls, we felt that the touch controls were somewhat counterintuitive and were put off by some of the odd touch combos needed to perform a certain action. Pausing and playing a track was the only normal action, in our opinion, with a simple double-tap on either earphone doing the trick. Let’s get to the cumbersome ones now. Going to the previous song requires you to triple tap the left earphone while skipping to the next track requires a triple tap on the right one. Increasing and decreasing the volume is achieved by single-tapping, or sliding up or down, on the right and left earphones respectively. 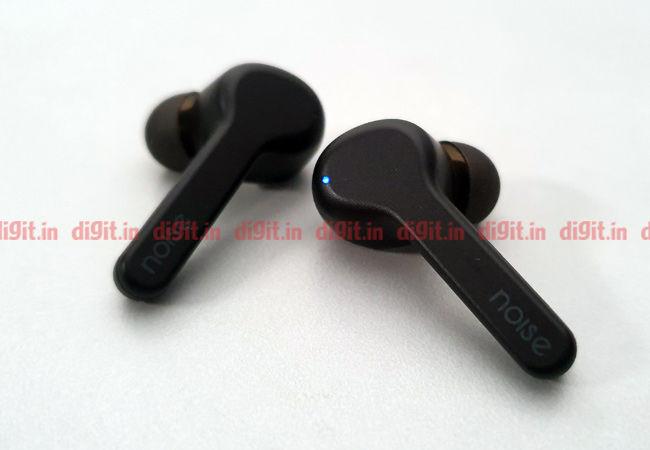 What’s the problem, you ask? Well, performing this action is a chore since sometimes, the touch panel registered it as a double-tap and paused the track. Other times, the earphones registered a triple tap as a single-tap and increased the volume. It got increasingly aggravating and after the point, the reviewer resigned to skipping tracks by whipping out the test device instead.

The touch controls can be also be utilised to activate your device’s voice assistant by touching and holding either earphone. Take this with a pinch of salt since it only worked about 50 per cent of the times we tried. To answer a call you will need to single tap either earphone while touching and holding any earphone for two seconds will reject the call and double-tapping any earphone will end the call. These actions worked well, without any major hiccups. While the touch controls are a bit of a hit and miss, we still used the pause/play and volume touch controls extensively since they worked almost flawlessly.

The Noise Shots X-Buds are also IPX5 rated (sweat-resistant) which means that they can brave the occasional light rain and sweat-inducing workout sessions. The earphones also sport Bluetooth 5.0 connectivity, auto power, pairing and power off capabilities, and AAC codec support. However, there is micro-USB charging instead of Type-C, which is always a bummer in 2019, since having to carry around two chargers is always a nuisance.

Upon unboxing the Noise Shots X-Buds, users will be greeted by the earphones itself encased in a matte-black elliptical charging case, a micro-USB charging cable, a user manual and additional ear tips in different sizes (S, M and L). The oval charging case’s matte finish is pleasing to the touch and feels quite premium in hand, despite its plastic body. The ‘Noise’ logo is subtly embedded smack in the middle of the case and has an extremely understated look. The case is magnetically sealed shut but opens up seamlessly without having to apply too much pressure. 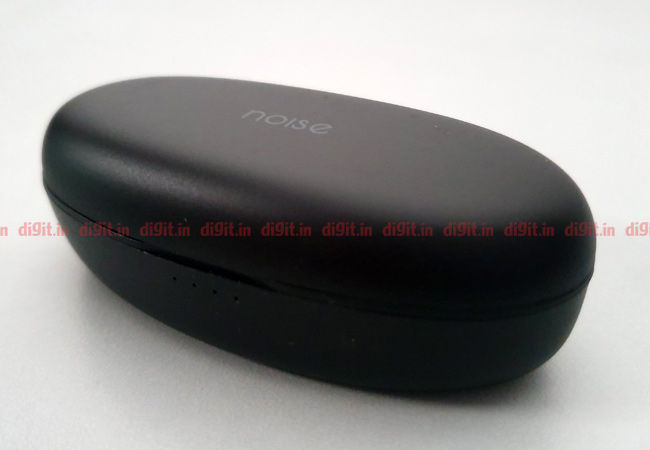 The case is fairly pocketable, however, it did jut out quite a bit in women’s jeans. It is exceedingly lightweight as well, weighing a mere 50g along with the earphones inside the case. The case also features a charging indicator with four small LEDs that light up white indicating the remnants of charge in the case. 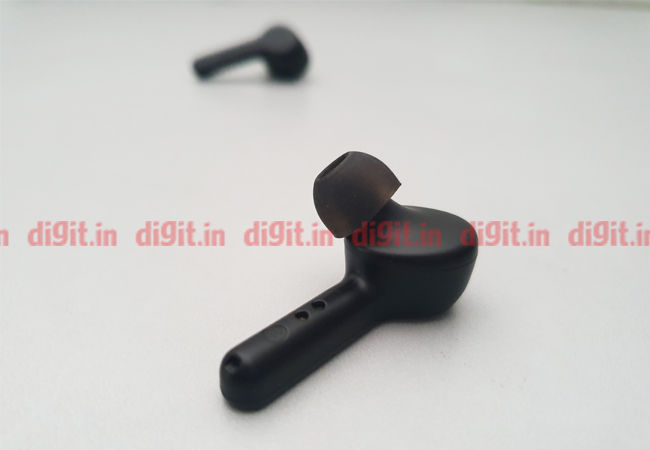 The design of the earphones is reminiscent of the Apple Airpods since they too feature the customary ‘pipe-style’ design with angled tips. As mentioned above, the box includes differently-sized silicone ear tips and the amalgamation of this along with the 45-degree angled earphone nozzles ensure a snug fit. The Shots X-Buds are unnaturally comfortable to wear, even for prolonged listening sessions and stay put even during running and light exercise, which is commendable. Be warned though, these earphones do protrude out of the ears a fair bit, and if you have short hair or wear your hair in a ponytail, they bulge quite prominently, even from a distance. 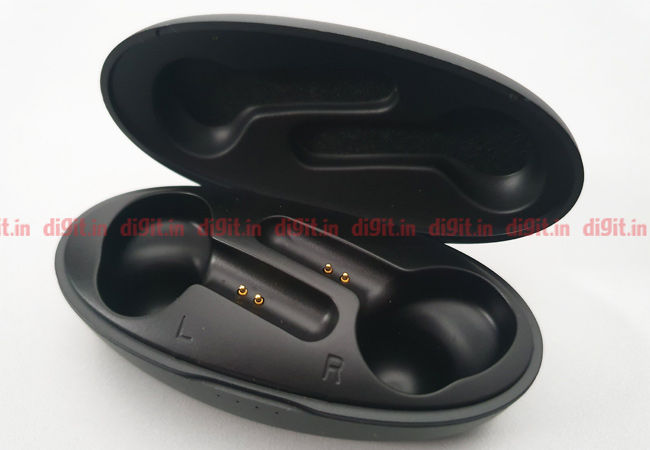 The Noise Shots X-Buds offers a fairly sizeable four hours of battery life on the earbuds itself and the accompanying charging case is capable of topping the earphones off an additional three times. This gives it an overall battery life of sixteen hours, which is not too shabby at this price point, especially when the Apple AirPods only similar figures that almost four times the price. 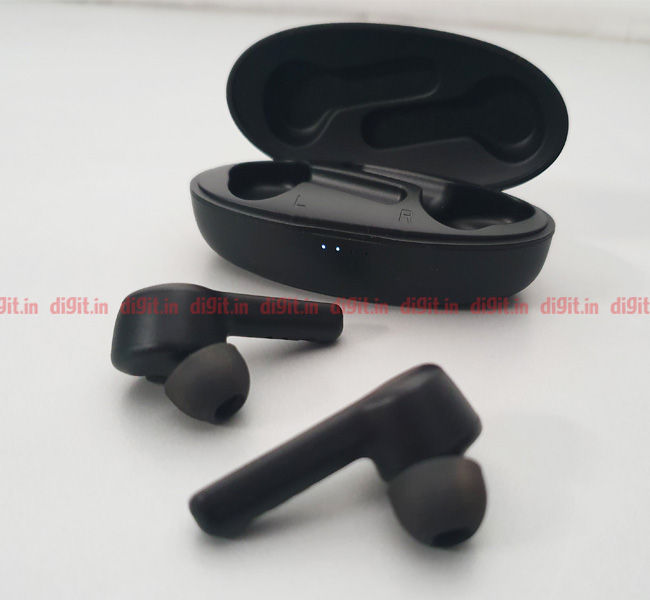 We managed to extract about 3 and a half hours of juice from the earbuds, which is pretty close to the company claim. The charging case, powered by a 650mAH battery, delivered as advertised and was able to charge the buds three times over. When the battery of the earphones reach a critical stage, the earphones repeatedly prompt you about this every 30 seconds and the LED indicators turn red.

The charging case’s LEDs light up white when it is connected to the micro-USB charger and stop glowing once the case has been fully charged. It took around 2 hours and 15 minutes to bring the case up from 0 per cent to a hundred per cent.

There’s a lot to like when it comes to Noise’s newest true wireless entrant, the Noise Shots X-Buds. At a fairly affordable price of Rs 3,999, the earphones offer balanced and detailed midrange and treble performance. Bass heads, however, must refrain from buying these earphones since the response in this range is significantly understated, to a point where hip-hop, rap and EDM genres feel quite listless. Nevertheless, if the bass-y ‘booms’ and ‘thumps’ are not pivotal to your listening experience, the Noise Shots X-Buds offer commendable sound performance, IPX5 sweat resistance, touch resistant controls and more, all without burning a sizeable hole in your pocket.