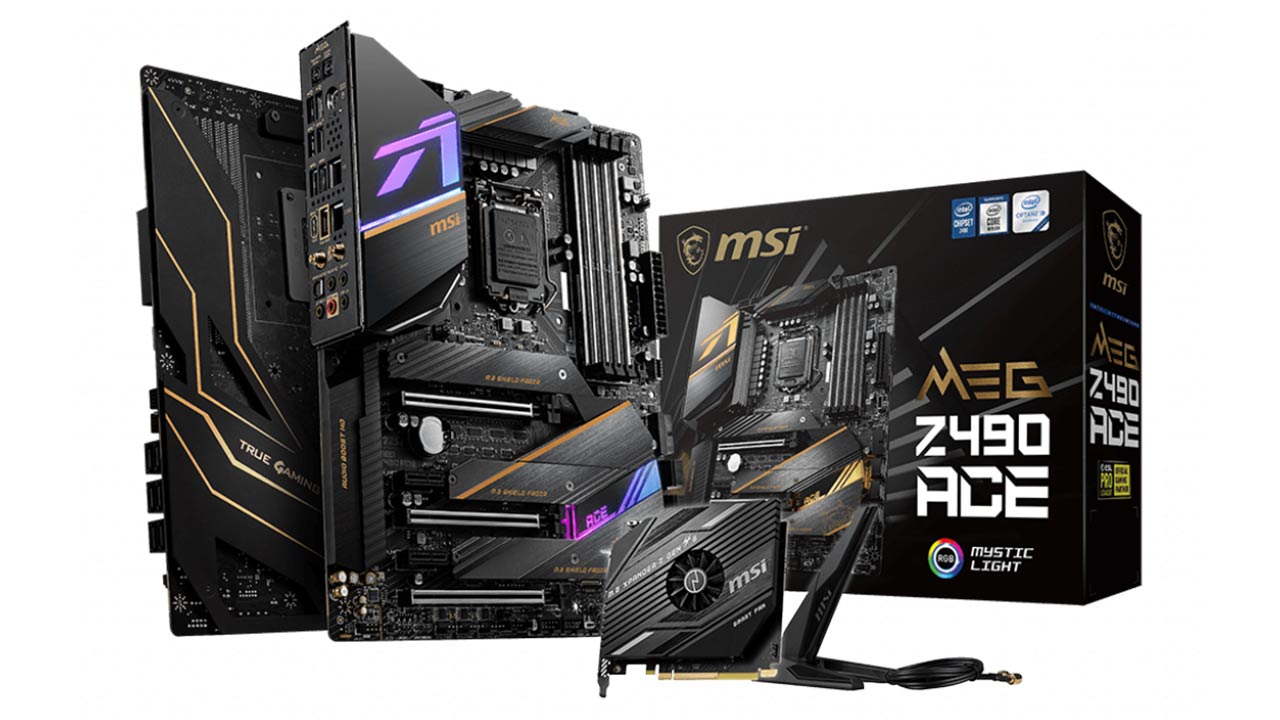 MSI MEG Z490 ACE is one of the flagship motherboards from MSI for the Intel Z490 platform i.e. Comet Lake. Most motherboards based on the Z490 platform have a similar feature set as their older Z390 counterparts given that the platform hasn’t evolved much and the fact that the Comet Lake processors are still based on the Skylake architecture with a few additional cores in the top SKUs. The MSI MEG Z490 ACE in particular sits right between the absolute flagship MEG Godlike and the more sobre MPG Gaming Carbon Wi-Fi. We’ve spotted the board selling for about INR 43,999 which tells us that MSI is attempting to strike a balance between packing in more features while keeping the cost in check. Absolute high-end motherboards with every generation of processors tend to cost upwards of 60K in India, so you can see how the MEG Z490 ACE is positioned. 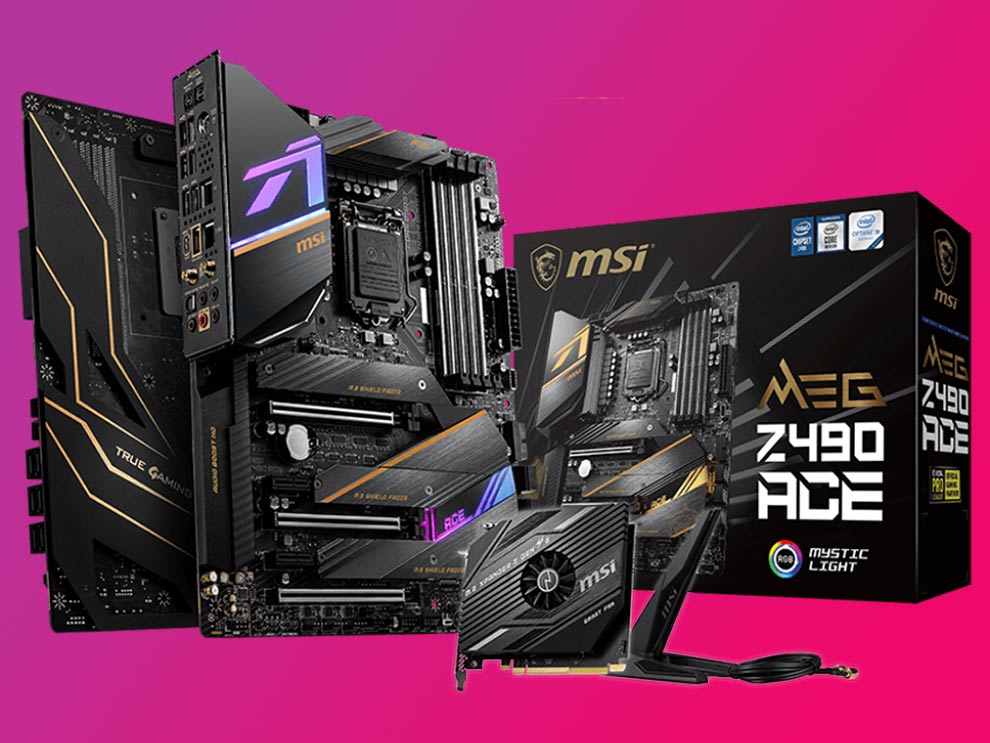 When you think MSI, you’re instantly reminded of blacks and reds, and of course, the dragon. With high-end motherboards such as the MEG Z490 ACE, MSI has opted for a gold and black colour scheme and it features the latest iteration of their dragon symbol. Packaging aside, the board adopts the same colour scheme. However, the MEG Z490 ACE is laden with RGB features across the board so with all the lighting features enabled, the board doesn’t look tacky. We can say that there is no “excess”. The key RGB elements on the motherboard itself happens to be over the I/O shroud and the top place of the PCH. Throw in some RGB RAM and a graphics card with a few lighting elements and you can ensure that every inch of the board is lit up like a fancy christmas tree, if you’re into that. The BIOS does have toggles to switch off the RGB elements as is the case with most boards.

To view the detailed specification list for different versions of the motherboard, please refer to MSI’s official website.

The motherboard is accompanied by a handy set of accessories and essentials. Being a top-end board, the MSI MEG Z490 ACE comes with a Wi-Fi antenna given the Wi-Fi 6 CRF module that’s incorporated onto the board by default. The MSI MEG Z490 ACE uses an Intel AX201 Wi-Fi CRF module. 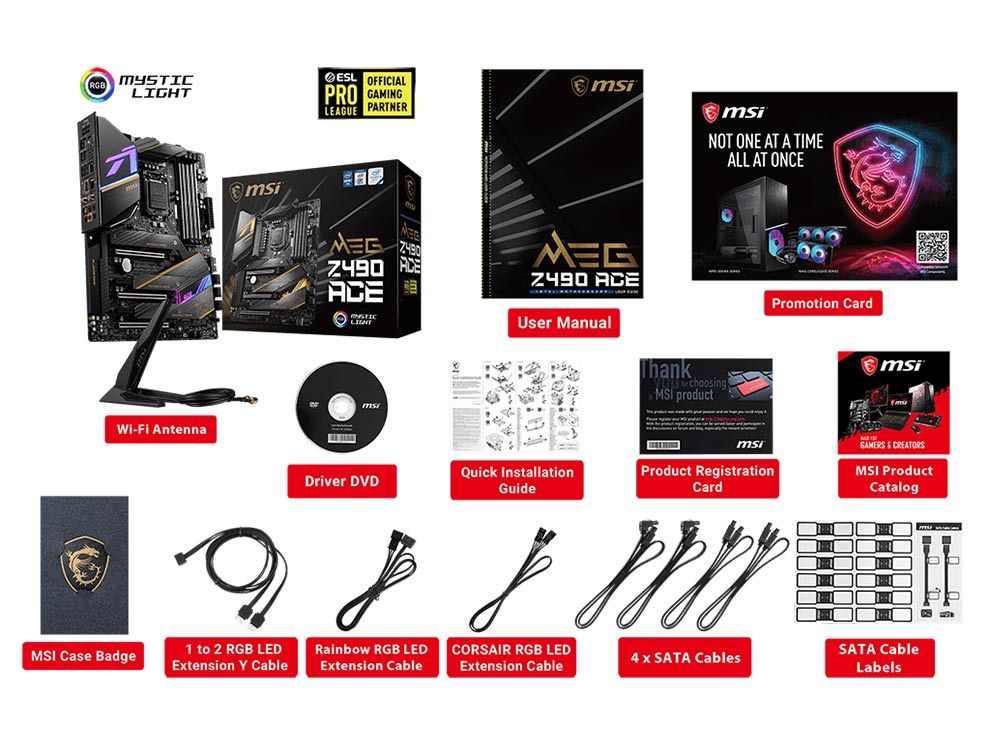 Given that the MEG Z490 ACE is positioned as a motherboard designed for overclocking, one might expect additional accessories towards enabling overclockers such as the OC Panel which used to accompany older ASUS ROG OC boards. However, motherboards have come a long way since then and the onboard monitoring solutions are quite advanced and overclockers tend to prefer their own multimeters over board accessories such as the OC Panel so those things have disappeared over the years.

The MSI MEG Z490 ACE has a very busy layout with a lot of components and ancillary components being packed onto the ATX form-factor. Straight from the beefy heatsinks at the top to the audio circuitry at the bottom, the board is packed.

Starting off with the CPU area, we see that MSI has been quite busy with the layout around the CPU socket. We can see some capacitors, through-hole and SMT, coming a little too close to the mounting holes. This isn’t much of a concern with folks who’re used to building PCs but the few uninitiated people might end up getting hit while mounting custom coolers. We put in some stand-offs from a custom cooler to show how close some of the SMT caps are to the thumbscrew on the left. 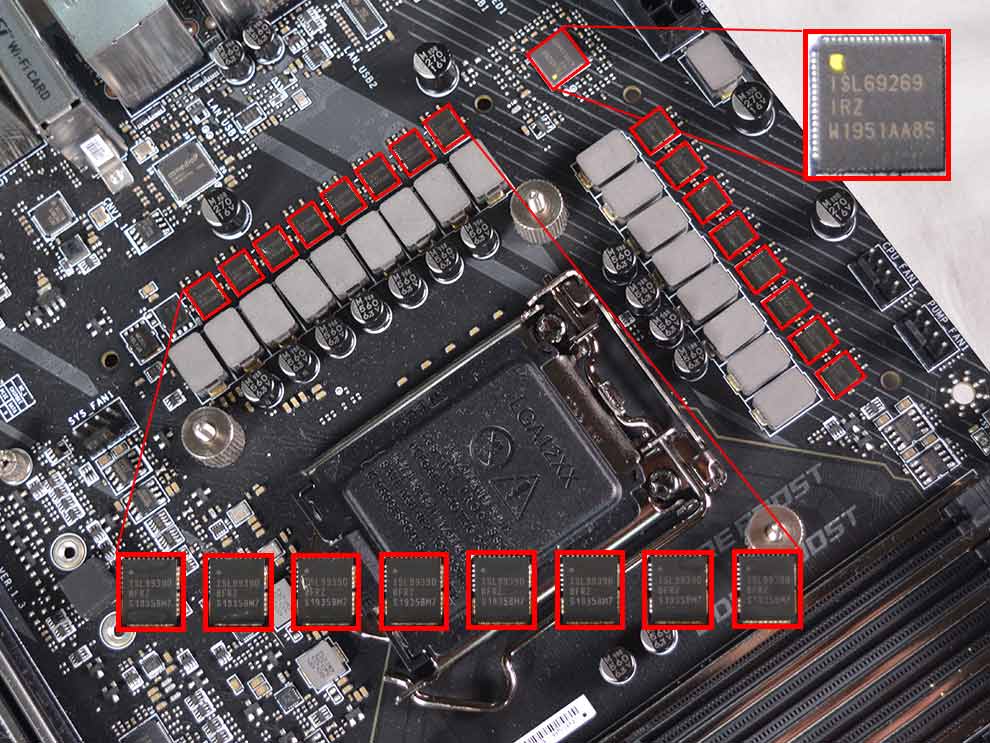 For the VRM, the MEG Z490 ACE uses an Intersil ISL69269 Digital PWM controller which then handles all the power stages. The ISL69269 can be implemented in a 8+2 or 8+1+1 configuration. In this case, MSI uses Intersil ISL99390 90A power stages and we can see 16 of these babies along the top and left edge of the CPU socket. So MSI does not use a doubler and has instead opted to mirror 8 power phases, hence, the use of 16 ISL99390. We recently saw a shift across all motherboard manufacturers as they moved away from using doublers on the more premium boards to reduce ripple, lower temps and build a more sturdy VRM.

Sitting on top of the VRM are massive chunky metal heatsinks that are attached to one another using a heat pipe. This helps transfer heat from across the individual metal blocks. The block on the left even has a little fan blowing air onto it from the rear IO shield. MSI does not use a desnse fin stack on the MEG Z490 ACE which is a bit disappointing given that this is a premium board. The Z490 GODLIKE has traded the blocks for fin stacks and it would have been better if the MEG Z490 ACE also had a fin stack.

The MSI MEG Z490 ACE makes use of two 8-PIN EPS connectors which then feed into the PWM controller. This allows for the board to distribute the load across multiple connectors and helps control heat generation at the EPS power connectors. Intel’s top Comet Lake processors have a base TDP of 125W which doesn’t tell you how much power it consumes but it gives you a fair idea of what it might under load. We’ve seen peak power loads of 290+ watts on the Intel Core i9-10900K which is quite a lot for a single 8-pin power connector to handle over an extended period of time. 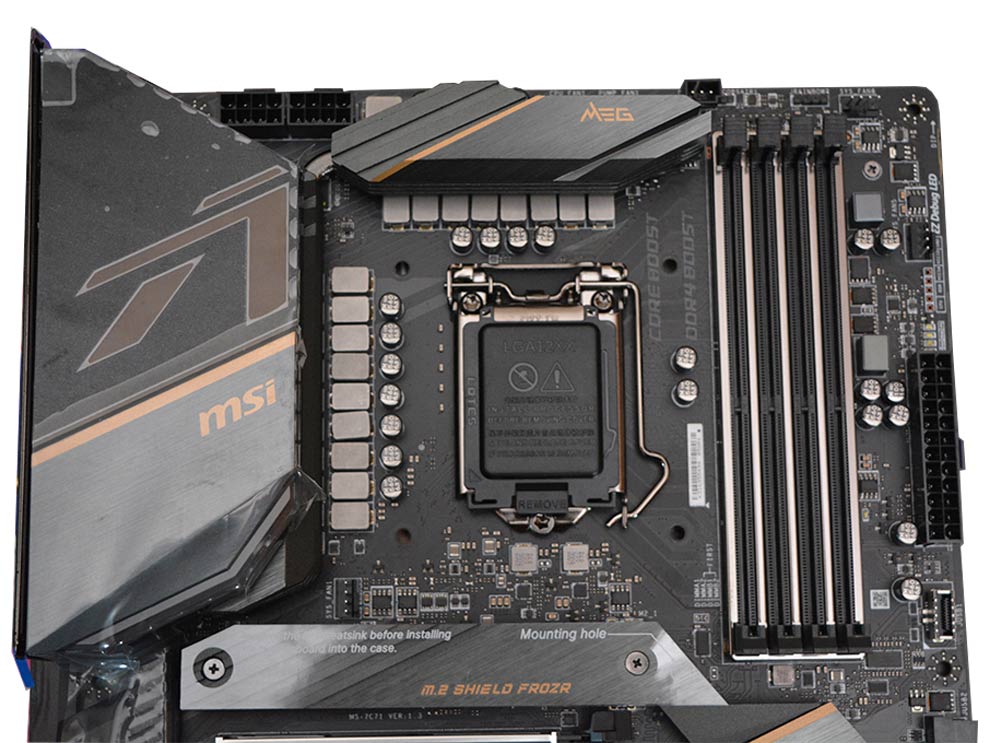 For the RAM slots, MSI uses an easy-to-use slots with single locking tabs on the top. Some custom CPU coolers do hang over the first memory slot, so if you’re using a 4 DIMM configuration, then you will have to remove your CPU cooler before you can access the RAM slot closest to the CPU socket. Aside from that, each RAM slot has metal braces for extra rigidity. The board dedices 2 power phases for the memory which is sufficient for all RAM configurations. Overclockers tend to use a 2xDIMM configuration anyway. 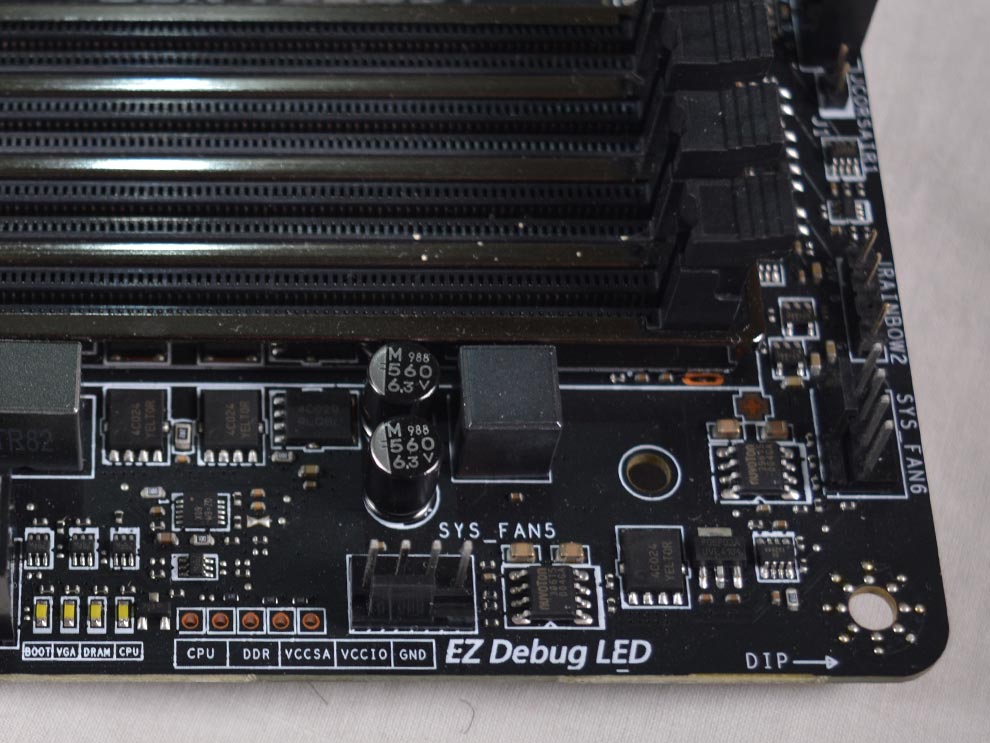 Right next to the RAM slots we also see the voltage test pads as well as POST status LEDs for the key components. Aside from that MSI also has the alphanumeric EZ debug LED indicator which is present on the bottom of the board. We don’t know why they’ve chosen to put the lettering next to the RAM slots for components which aren’t present there but this doesn’t impact anything. If you read the manual properly, you should be just fine.

The MSI MEG Z490 ACE has 3 x16 PCIe slots, 2 x1 PCIe slots and 3 NVMe slots. The first two of the PCIe slots are from the CPU and the third one comes from the PCH. These can be configured in either a 16/0/4 arrangement or in an 8/8/4 arrangement. The x1 PCIe slots come from the PCH. So you can implement a 2-way NVIDIA SLI or a 3-way AMD CrossFire multi-GPU setup if you need the ridiculous amount of horsepower a multi-GPU setup provides. However, not all games are optimised for multi-GPU configurations, so that’s a dilemma for you to solve. 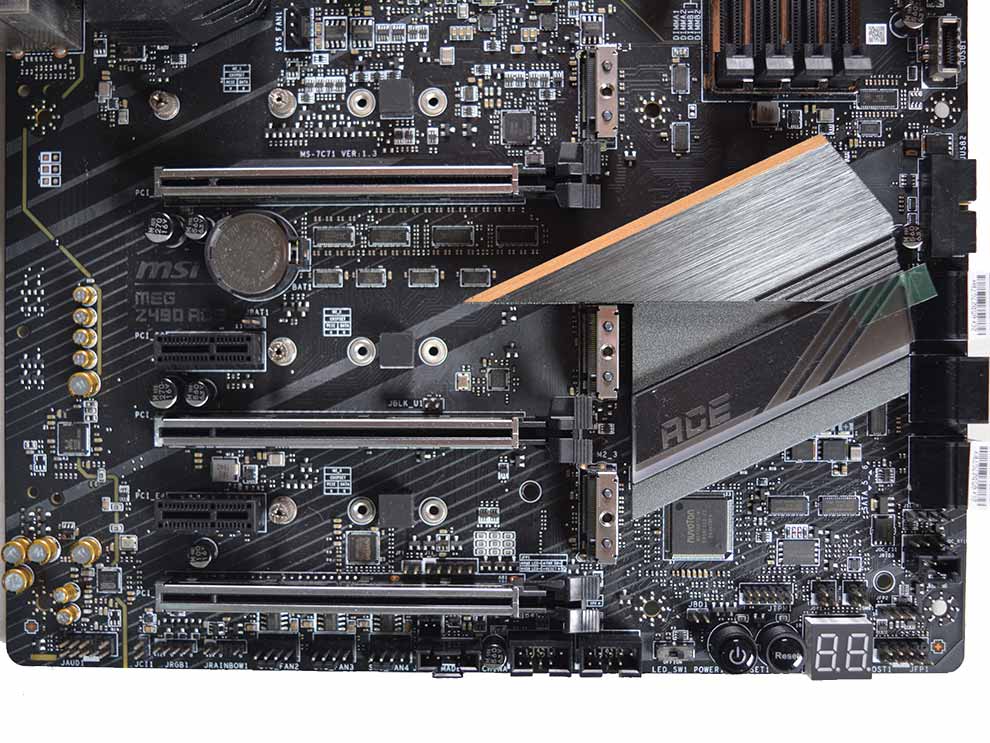 All the M.2 slots have heatsinks on top. The heatsinks are interleaved with each other so you might have to remove more than one in order to access a particular M.2 slot. Moreover, only one M.2 slot supports 22110 cards, the other two slots only support 80mm long cards. These M.2 slots share the same SATA busses so using one will render the other non-functional. The Z490 chipset supports RAID 0, 1, 5 and 10 for SATA and RAID 0,1 and 5 for M.2. 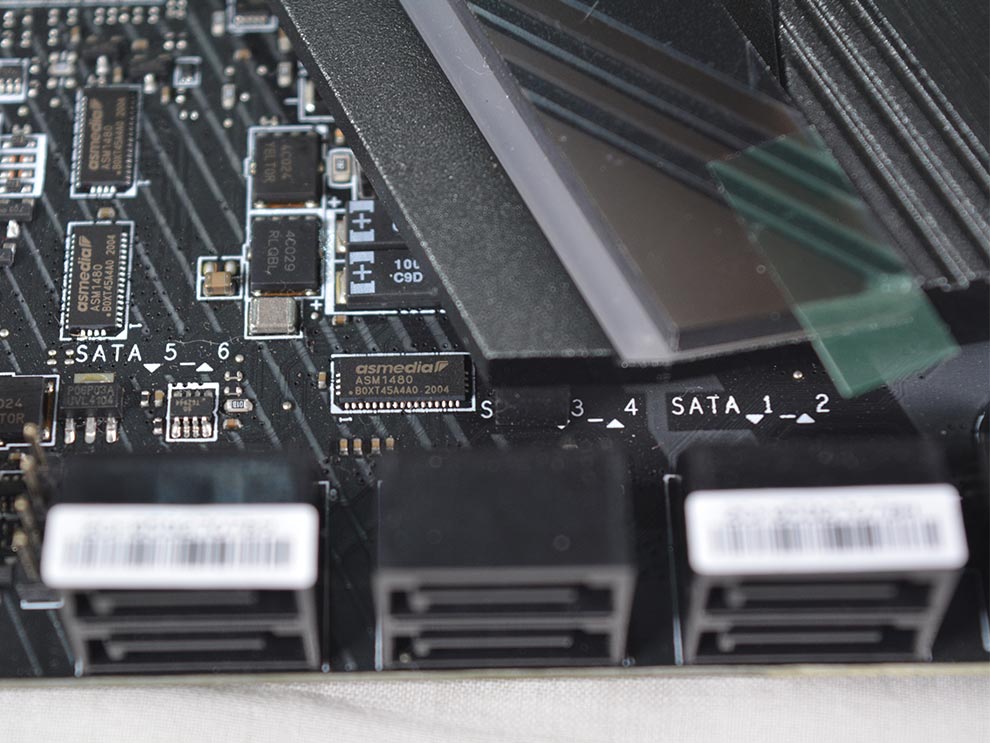 The MSI MEG Z490 ACE makes use of ASMedia ASM1480 mux/demux for handling the PCIe lanes between all the connectors.

The MSI MEG Z490 ACE does a good job of bunching all the I/O connectors towards the bottom right corner of the motherboard. We were a little concerned about some of the cabling blocking the power and reset switches, and even the debug LED indicator but the JTPM1, JDB1 and JSMB1 connectors are rarely used by people so that’s a non-issue. 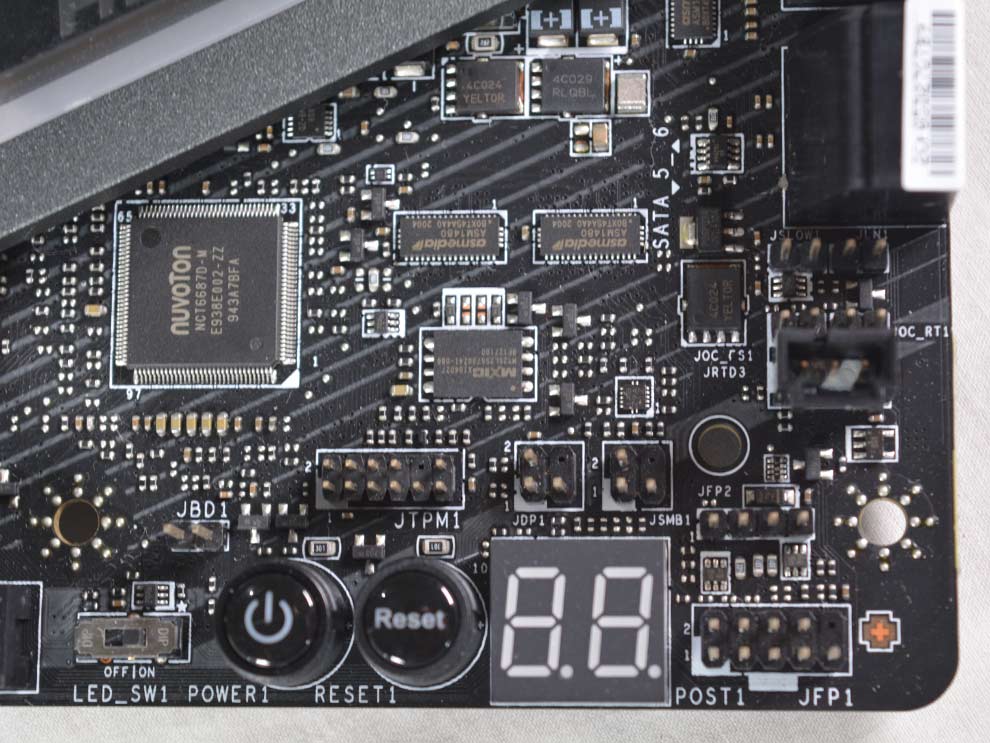 The physical LED switch right next to the power switch is a nice addition for folks who don’t want to dig through the BIOS to disable all the LEDs.

On the Z490 ACE, we see the audio circuitry is powered by a Realtek ALC1220 CODEC coupled with the ESS Sabre ES9018 DAC. MSI has been using Sabre DACs on the motherboards and laptops for quite a few years now and it really helps with powering high-impedance headphones. Plus the Nahimic software solution is always a good addition. 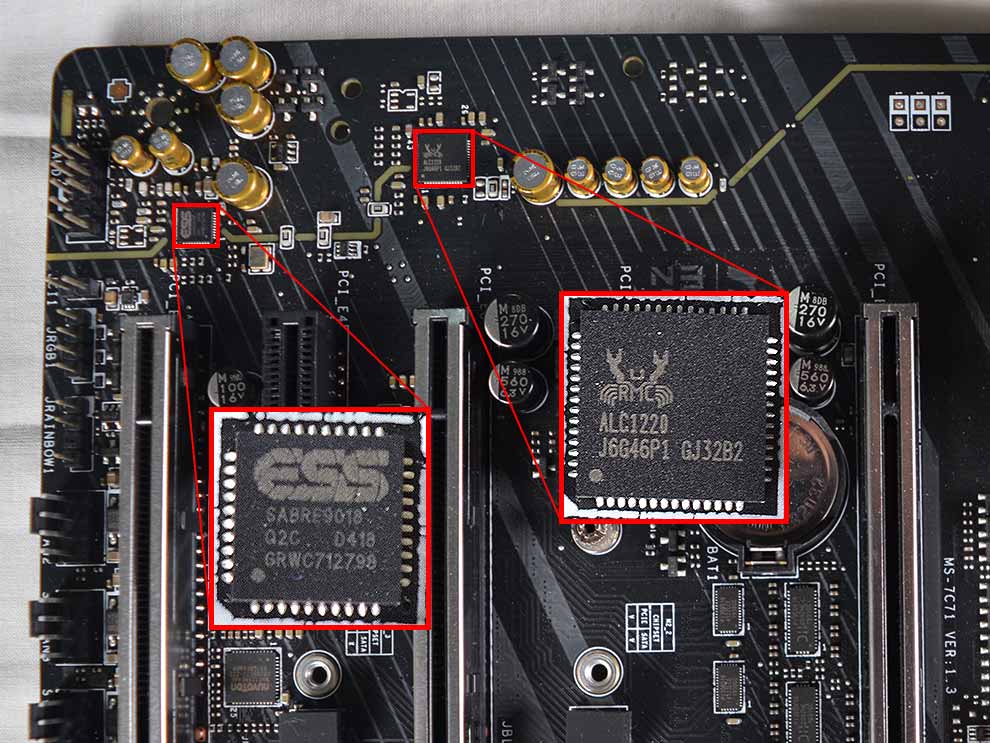 MSI clubs the audio circuity with Chemicon audio capcitors for a better experience but we all know that none of this is going to satiate audiophiles no matter how close the actual waveform is to whatever fancy setups they own.

Like most premium motherboards, MSI has a pre-attached Rear I/O shield with quite a few inlet holes drilled in it. This is because there’s a tiny fan on the inside drawing air from the Rear I/O and using that to cool the VRM heatsink. 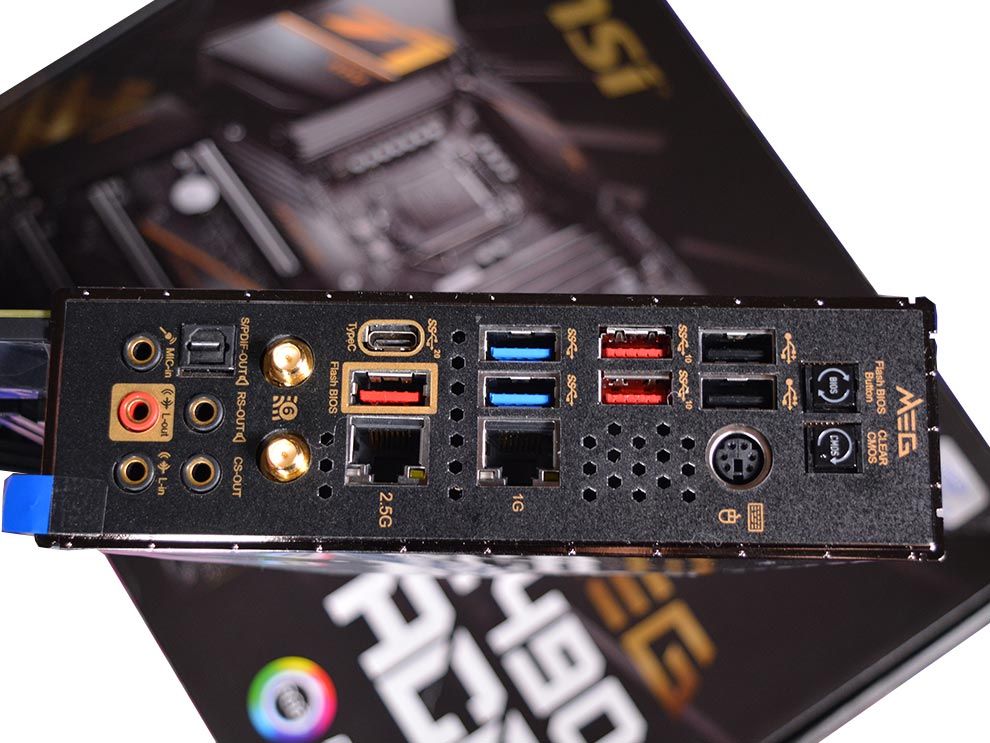 We see the odd PS/2 port on this board. Some enthusiasts still prefer to use PS/2 keyboards for their true n-key rollover feature. Overall, there are 8 USB ports with different bandwidths owing to the fact that some of them come from the CPU and some from the PCH. The following diagram should make it clear as to which ports support the higher bandwidths. 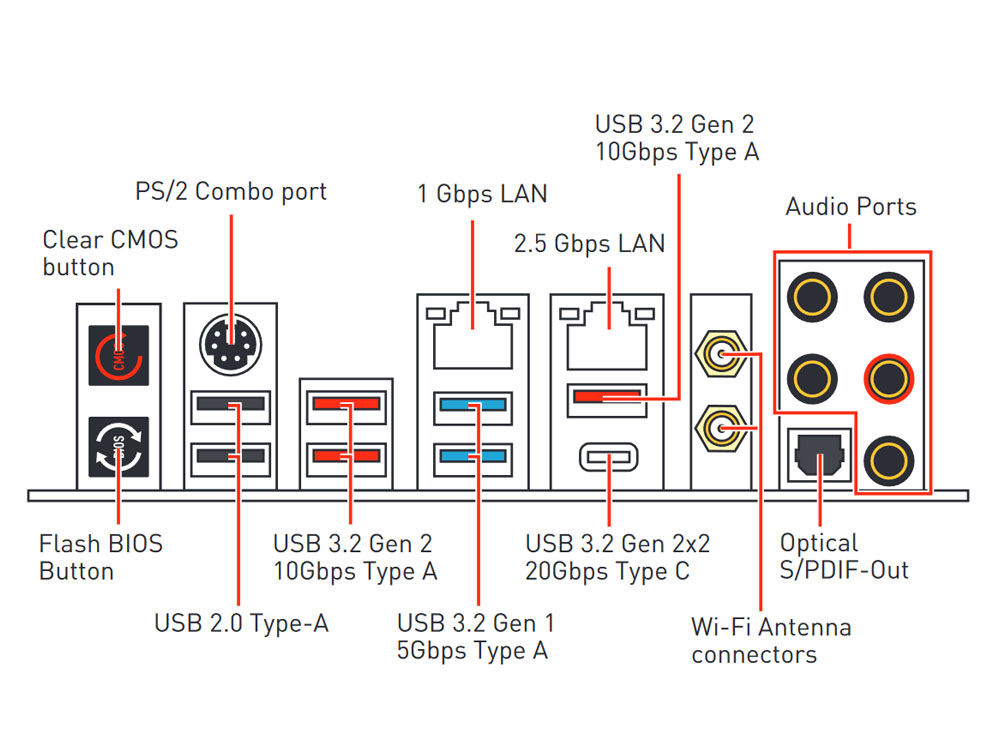 It’s a simple colour scheme for folks who’d like to memorise the port bandwidths. The grey ones are the USB 2.0 ports,  the Blue ones give 5Gbps and the Red ones give 10 Gbps. There’s one Type-C port for hitting 20 Gbps. Lastly, we’d like to point out that all the audio connectors are gold plated to prevent corrosion. Again, a nice touch for folks who don’t want corroded ports i.e. everyone.

There isn’t much to add about MSI’s Click BIOS 5 than what has been said before. The overall interface is quite straight forward for folks to understand. The Boot Priority queue could do with a little dumbing down for beginners since the same UI is present in the low-end budget boards as well. 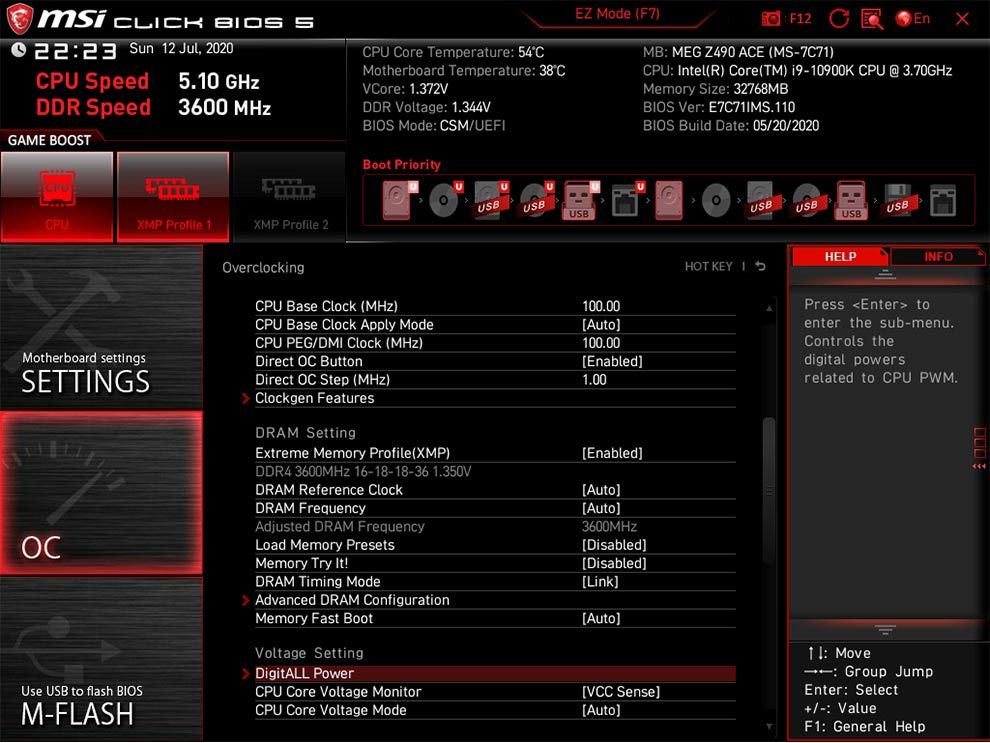 MSI includes the Dragon Centre in their laptops as well as with their desktop motherboards. Over the years, we’ve seen Dragon centre evolve to become a nice hub for monitoring all your system metrics rather than just be a bloatware that would be non-essential. The Dragon Centre allows you to play around with MSI’s Mystic Light RGB system, Ethernet controller, monitor colour profiles, set power plans and even record game highlights.

The MSI MEG Z490 ACE is quite a pricey board for the Indian markets but all features considered, this ends up being a top-end motherboard which is at par with all the other offerings from competing manufacturers. The board does not have any features for folks implementing custom loops but for someone wanting to run the latest Intel Comet Lake processor at its peak capabilities and go further with overclocking, the Z490 ACE is a great board. 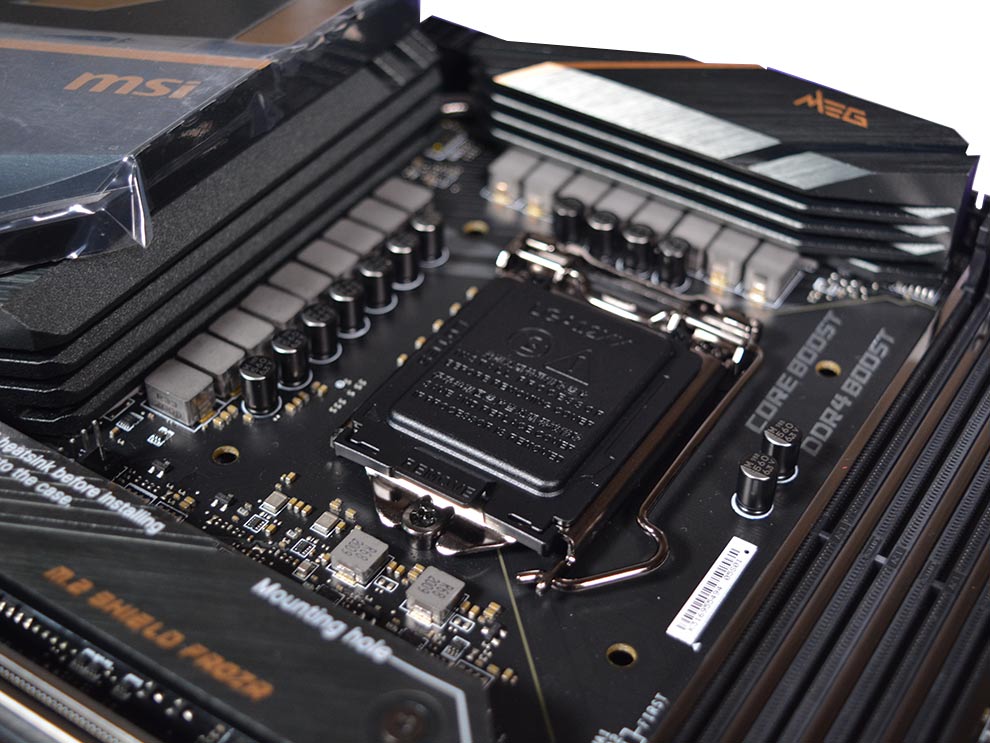