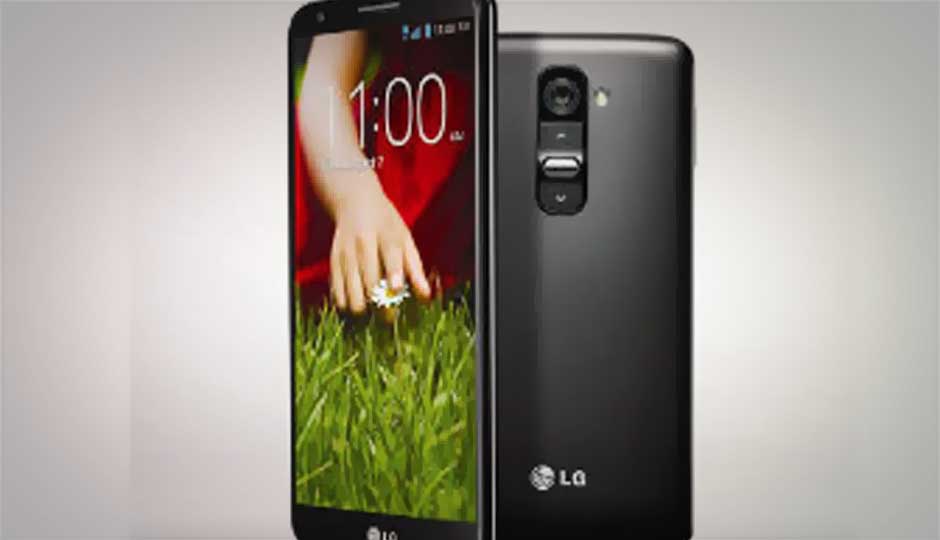 LG has, more often than not, flattered to deceive. LG phones have a lot of potential on the spec sheet, but are not necessarily what you would want to pick up over the rivals, who seem to offer a better overall package. Admittedly, we had the same trepidation when the G2 was announced in India. The fact that it doesn’t have the Optimus branding indicated that LG were on to something different. Let us see how different the G2 actually is.

Straight out of the retail packaging, the G2 has a design tone that makes it look very similar to the Samsung Galaxy S4. LG has improved on the design with the almost non-existent bezel on the left and the right side of the screen. The footprint is relatively the same as the Galaxy S4. Despite a 5.2-inch screen, the G2 is not much bigger than the Nexus 4, and puts the likes of the Sony Xperia Z1 to shame, at least as far as the form factor and the footprint is concerned. Additionally, taking a cue from Sony’s new UI, LG has also moved the actions like Return, Home and Options into the UI itself, taking away the need for the touch sensitive keys below the screen.

Flip the G2 over, and there is a rather strange bunch of buttons there, you may think. That is because the new design theme has placed the volume rocker and the power key on the back panel, just below the camera. This looks different, and admittedly, takes some getting used to as well. Nothing that is insurmountable, but till you get used to this, there are chances you might bungle and press one of these buttons while on a call with the phone pressed against your ear. But, what this does is makes the sides clean, with only the SIM card slot on one side spine. The micro USB charging port is at the base, along with the hands-free speakers.

The G2 that we received for review was the white version. The back has a nice imprint on it, something that resembled fibreglass. However, that doesn’t mean much in terms of usability, because the back is all plain and tends to be slippery at times. The enamel colour finish looks good, at least in white. It is a tad disappointing that LG has used all plastic on the G2, but it is good quality nevertheless. 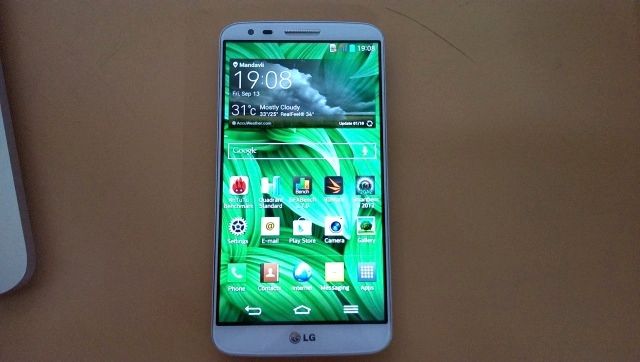 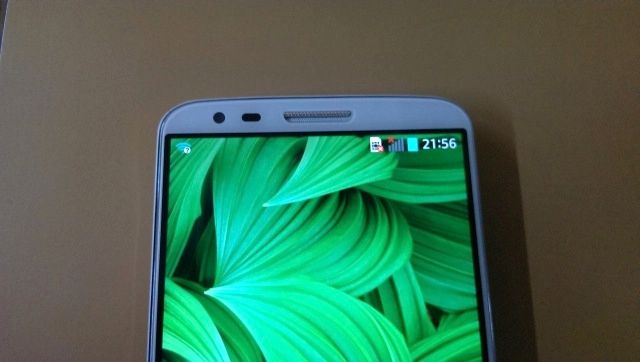 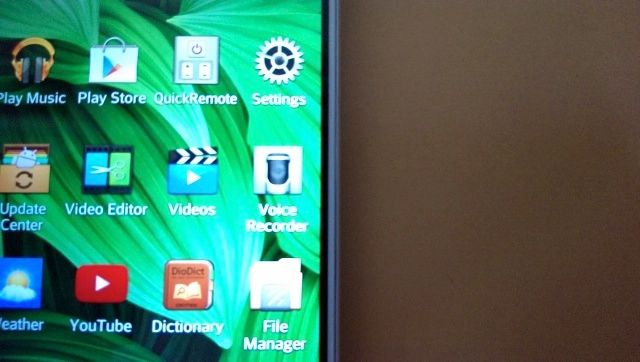 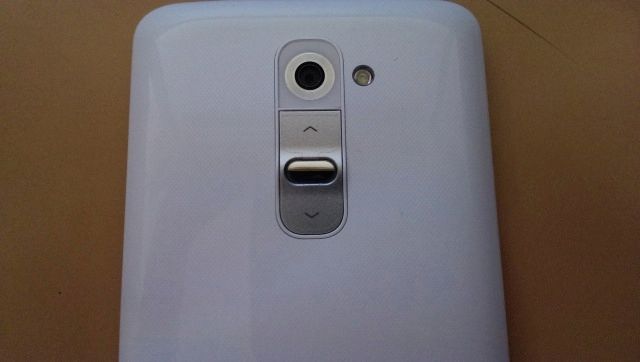 Display: Best in class, by far

LG has packed in a 5.2-inch IPS display in a form factor that most 5-inch phones cannot dream of. Even more important is that the display in question is by far one of the best that’s currently available on any available smartphone. The 5.2-inch screen has a pixel density of 424ppi, while the 5-inch screen on the Galaxy S4 has 441ppi. However, the difference isn’t at all noticeable; in fact on the contrary, the G2’s display looks crisper and colours look a lot more realistic. This fantastic display handles HD media playback very well. Like most phones, there are reflective tendencies as well, but the IPS panel affords better viewing angles from the sides as well as outdoors under sunlight.

Among the recent crop of Android phones – the Galaxy S4, the HTC One, the Xperia Z1, this display is by far the best in all regards – crispness, colour reproduction, viewing angles, and legibility under sunlight.

Packed with the Qualcomm Snapdragon 800 processor and Adreno 330 graphics, the G2 has more than enough power on tap. It can be compared directly with the Sony Xperia Z1, which has the same processor. Here are some benchmark score comparisons for the pedantic ones among us!


Beyond the benchmarks is the real world performance, which surely most of us are more bothered about. Like the other devices on Snapdragon 800 and 2GB of RAM, the G2’s performance is excellent. Apps open snappily, the interface is smooth and no amount of background app load can slow this phone down.

However, like the other phones running Snapdragon 800, the LG G2 also tends to heat up considerably when loaded. Play a game on this for 10 minutes, and the warm back panel gets uncomfortable.

All in all, push this phone (and the processor) as much as you can, but it will not give up. We have not yet been able to replicate issue-causing load or a find a game or a benchmark that can bring the Snapdragon 800 to splutter and wheeze.

With the 3000mAh battery packed in, the LG G2 is compensating for the scorching processor that it packs. However, it is more than just compensating when you end up getting almost two working days out of a single charge, when used as a primary phone. The brightness was set at 20%, mind you, but the rest of the load – constant 3G, mails and Facebook and Twitter syncing, IM chats and 2 hours a day of voice calls – drains most phones in not much time. The Xperia Z1, with the bigger battery had impressed, and the G2 continues on the same path. Bigger batteries are certainly helping, and should be the cue for more phone manufacturers.

While a 13MP camera is pretty much standard fare, what is not is the Optical Image Stabilization that LG has packed into this clicker. From what we saw with the test results, the camera is fairly good in good light conditions, but you actually get the value for money shots when shooting in low light. However, the camera does takes a certain amount of time to focus in low light. We have a bunch of Low Light shots, compared with the HTC One and the Apple iPhone 5.

Indoor – Low Light shot of the standard test scene: Doesn’t look like a low-light shot, does it? We swear we are not lying!

In good light conditions, the shots are detailed, with good colour and fairly crisp. There is some noise around the edges of the frame, a tad more than the HTC One or the iPhone 5. However, zoom in and the crispness and lack of edge noise is impressive.

Indoor – Good Light shot of the standard test scene: Very crisp and detailed, and text looks even better because of lack of edge noise.

Outdoor shots from the LG G2. Very impressive performance in the close up shots. In the landscape shot, the depth is a tad disappointing, but across all shots, the detailing and colour reproduction is impressive.

Overall, this camera is fairly good for what it promises, with the real boost being the low light photography.

To Buy or not to buy: Certainly worth considering

There is absolutely no doubt that LG has made an exceptional smartphone. And for once, an LG flagship is right up there with the rivals in terms of the overall package, and for some buyers, it may even be better than the rest. The display is by far and away the best one on flagships at the moment. Battery life is very good, the camera does the job well and the performance cannot be faulted. What this boils down to is your preference, and if you have any preset notions about any brand. Our recommendation is that you go ahead and pick up the LG G2. You won’t regret it.