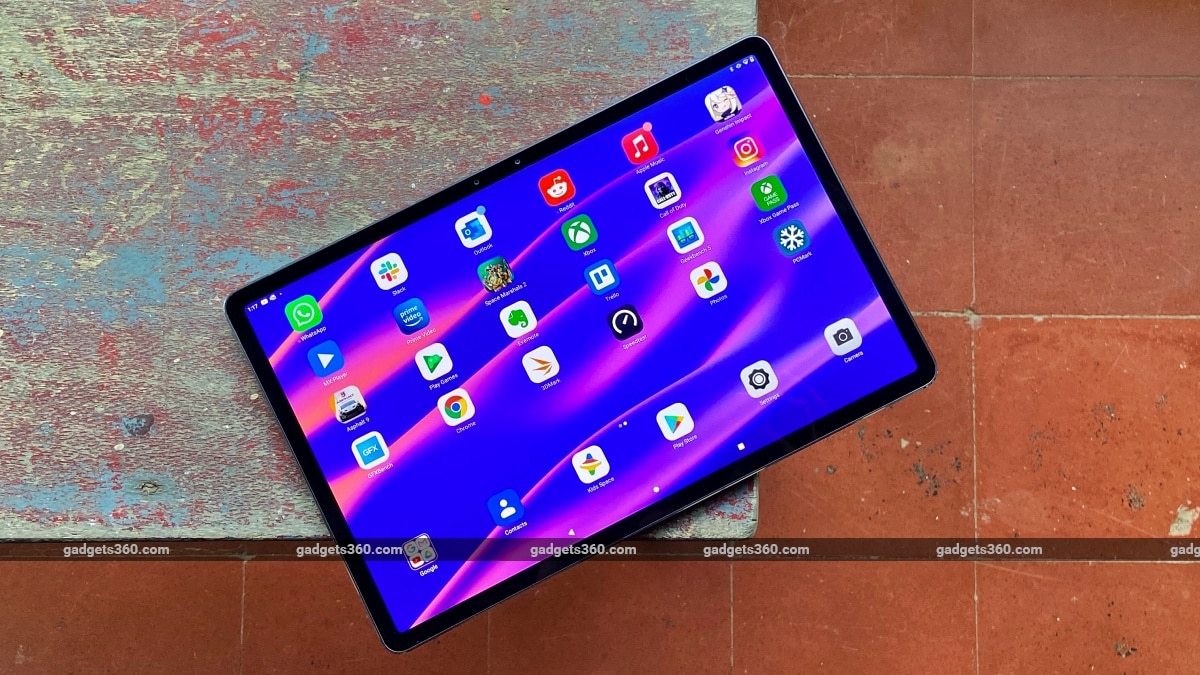 Lenovo’s Tab P11 Pro seems like a well-priced Android tablet. It has a decent mid-range processor, along with a display and speakers that are geared towards entertainment. There’s also an optional stylus, and what Lenovo claims is a laptop-class keyboard for productivity. However, after a few weeks of use, I realised that this tablet is best used as a consumption device and nothing more. It can’t replace your laptop, but for some buyers interested in buying an Android-powered tablet in 2021, that might not matter.

The Lenovo Tab 11 Pro is available in a single configuration, with 6GB of RAM and 128GB of storage that is priced at Rs. 44,990. The tablet’s SIM tray offers space for one Nano-SIM and a microSD card, with a maximum supported capacity of 256GB.

The Tab P11 Pro looks very similar to Samsung’s recently launched Galaxy Tab S7 FE (Review), but is slimmer at just 5.8mm. While the front face is basically a sheet of glass with relatively thin bezels (for a tablet) all around, there are also two front-facing cameras above the display. The back is made of metal and features antenna lines at the top (when held horizontally) and a two-tone finish. A Lenovo logo is prominently placed on the right, and the rear dual-camera module on the left.

The sides of the device are flattened. There are speakers on the left and right, with the left side also housing the SIM tray and power button, which has an embedded fingerprint reader. The volume buttons are placed on the top left, while the 4-point connector for the keyboard accessory is at the bottom. I had no trouble finding the volume and power buttons, once I got the orientation right (with the selfie cameras at the top).

Lenovo offers an optional keyboard accessory, which it claims offers a laptop-class typing experience with 1.3mm of key travel. Unfortunately I did not get to test that as the company could not provide a sample for review. Also available is the Lenovo Precision Pen 2, which would have worked well with the preinstalled Bamboo Paper or Squid apps, but the company could not send that either.

Despite this tablet’s unusually thin body, build quality felt premium. It’s quite solid, but at 485g it did feel heavy over long periods and is not ideal for one-handed use. What’s more annoying is that there is no kickstand mechanism, or even a simple case in the box, so I usually ended up leaning it against a pile of books on a table, especially when watching videos. The keyboard case (called the Lenovo Keyboard Pack), which can be added when purchasing the device for an additional Rs. 5,000, will take care of this even though it adds to the overall thickness of the device.

The Lenovo Tab P11 Pro features a 16:9 aspect ratio OLED display with a WQXGA 2560×1600 resolution. It measures 11.5 inches diagonally and has a standard 60Hz refresh rate, which is a bit disappointing given this tablet’s premium pricing.

Lenovo’s tablet uses Qualcomm’s Snapdragon 730G SoC, which was launched in mid-2019. Now, about two years later, the gamer-centric processor is usually found in budget to mid-range smartphones such as the Google Pixel 4a (Review). There’s 6GB of LPDDR4x RAM and 128GB of UFS 2.1 storage, with room for expansion using a microSD card (up to 256GB). While the tablet supports 4G data and has built-in microphones, you can’t place voice calls. Communications standards include dual-band Wi-Fi ac and Bluetooth 5. The tablet has a 8,400mAh battery and supports 20W fast charging.

The tablet’s software offers a desktop-like productivity mode, which can be used with a mouse and a keyboard

The Lenovo Tab P11 Pro is powered by what appears to be a stock version of Android. However, this is Android 10, which is a bit outdated in 2021. There are also some preinstalled third-party apps including Netflix, Dolby Vision, Dolby Atmos, Office, OneNote, Bamboo Paper, and Squid. There are also the usual Google defaults with the addition of a Kids Space app, which is basically a Play Store with YouTube recommendations for children built into a fun app. In regular use, I did not receive any annoying promotions or notifications from any of these apps.

While the software appears stock, Lenovo has added several customisations of its own under the hood. These include minor UI elements such as a Smart Navigation slide-out menu that lets you easily take screenshots or screen recordings, and even a real-time beautification mode in video calls. Then there are some bigger software add-ons such as Productivity Mode, which works like Samsung’s DeX, switching from a regular phone-like Android interface to a desktop-like interface with a taskbar and windowed apps.

The Lenovo Tab P11 Pro’s 11.5-inch OLED display is sharp and gets quite bright outdoors. Colours are quite saturated, but they can be tweaked in the Settings app. Lenovo claims that the Tab P11 Pro’s display supports HDR10 and Dolby Vision. Netflix allowed full-HD playback with support for HDR10 and Dolby Vision. Shows available in those formats looked quite impressive on the display, with good contrast and sharpness. Content on Amazon Prime Video also looked sharp and vibrant.

Adding to that immersive video streaming experience is the four-speaker setup. It supports Dolby Atmos audio, which sounded quite rich and immersive given that this is a slim tablet. The sound was loud and clear when catching up on movies, and it meant that I rarely had to reach out for my Bluetooth headphones.

On the downside, this tablet does not allow cellular voice calls. VoIP calls placed through WhatsApp and Zoom sounded quite clear on both ends, which is good given that I used the tablet at arm’s length and on a table outdoors.

A general lack of support from Google makes the Android experience on tablets feel like using a stretched-out smartphone, which isn’t good. The Settings app for example has no expanded menus, which means tons of wasted space. Another example is the Google News feed, which is a strip in the middle of the display with lots of white space on both sides.

You literally have to stretch out for buttons from left to right or top to bottom across the expanse of the display, when menus and submenus should ideally be within reach. Except for Gmail, Maps and YouTube, even Google’s own default apps are made for smartphones and simply stretch across the width of the display.

Microsoft’s Office has been optimised for tablets, but most other third-party apps (including productivity apps like Slack, Trello etc) haven’t been. I did enjoy using WhatsApp (for video calls) and Instagram (which looked like a magazine) on a big screen, but both apps could have been optimised much better for tablets. Indeed, Apple’s iPad with iPadOS is a lot better when it comes to both design and third-party apps, letting users take advantage of a bigger display.

The Productivity Mode can be activated from the Settings app or from a toggle in the notifications tray. Once activated, you can set it to pair with a connected Bluetooth mouse and keyboard. The same rules apply to the optional keyboard accessory, which also has a built-in trackpad, reducing the need for a mouse.

Once in the Productivity mode, the home screen switches to a desktop-like interface which looks and feels very similar to Samsung’s DeX. You can choose to open apps full-screen or in small floating windows. Not all apps will run full-screen. Switching between windows is quick and easy, but without any defined borders around them, it’s annoyingly difficult to find out where an app’s window ends when two or more are overlaid.

Also, once I had opened up 7-10 apps, the system began to lag. There were even instances when the taskbar disappeared for a few seconds. At other times, bringing up apps which were already opened by tapping on their taskbar icons also took a few seconds. While the Lenovo Tab P11 Pro, along with its keyboard accessory, is marketed as suitable for getting work done, I steered clear of the productivity mode after trying it a few times as it was a bit frustrating to use.

Despite its slightly old Qualcomm Snapdragon 730G processor, the tablet performed well enough in our benchmark tests. The Lenovo Tab P11 Pro managed a score of 3,31,115 points in AnTuTu along with 528 and 1,685 in Geekbench’s single and multi-core tests respectively, which is as good as a mid-range smartphone.

Gaming performance was quite good overall. The tablet barely warmed up and I was able to max out graphics settings in most games. The four-speaker system made the gaming experience quite immersive, and with a punchy OLED display, I did not miss a high-refresh rate panel. Call of Duty: Mobile worked smoothly at the default High frame rate and graphics settings, and continued to run smoothly even after maxing them out. The same can be said about Asphalt 9: Legends, which performed well even with the graphics set to High Quality, with no slowdowns or lag during gameplay.

The Lenovo Tab P11 Pro has a 13-megapixel primary camera and a 5-megapixel ultra-wide-angle camera at the back. The selfie camera setup includes two 8-megapixel cameras, one of which is an infrared sensor that is used to calculate depth for effects in the background in video calls. Photos taken in the daytime with the main rear camera came out with below-average detail. These cameras were not usable in low light, and even photos using the ultra-wide-angle camera in daylight came out a bit too blurry. There is an LED flash at the back which comes in handy when scanning documents.

The 8,400mAh battery lasted about a day and half with regular use. This included loads of video streaming, scrolling through Instagram feeds, playing an hour or two of games, and listening to music, along with two email accounts syncing in the background. In productivity mode, the battery delivered about 8 hours (about a workday) of use with the display being constantly on and several apps open. Our HD video loop test lasted for 16 hours and 48 minutes, which is very good for a tablet this slim. Charging the tablet using the included 20W charger took around 3 hours, which seems like a long time, but is not all that bad considering the battery’s capacity.

The software limitations imposed by Android ensure that while the Lenovo Tab P11 Pro is good enough for shooting across occasional emails, it will not replace your regular laptop. However, when it comes to streaming movies and playing graphics-intensive games, it does go above and beyond. So, this tablet is quite the entertainer, especially if you are someone who travels a lot.

At this price point, you could also have a look at Apple’s 8th Gen iPad (128GB), which retails for Rs. 37,900 for the Wi-Fi model and Rs. 49,900 for the Wi-Fi + Cellular model. The Smart Keyboard will cost you an additional Rs. 13,900, but this combination would be more useful for productivity, thanks to iPadOS and its ecosystem of apps. On the downside, you won’t get an OLED display and as immersive an audio experience as on the Lenovo.