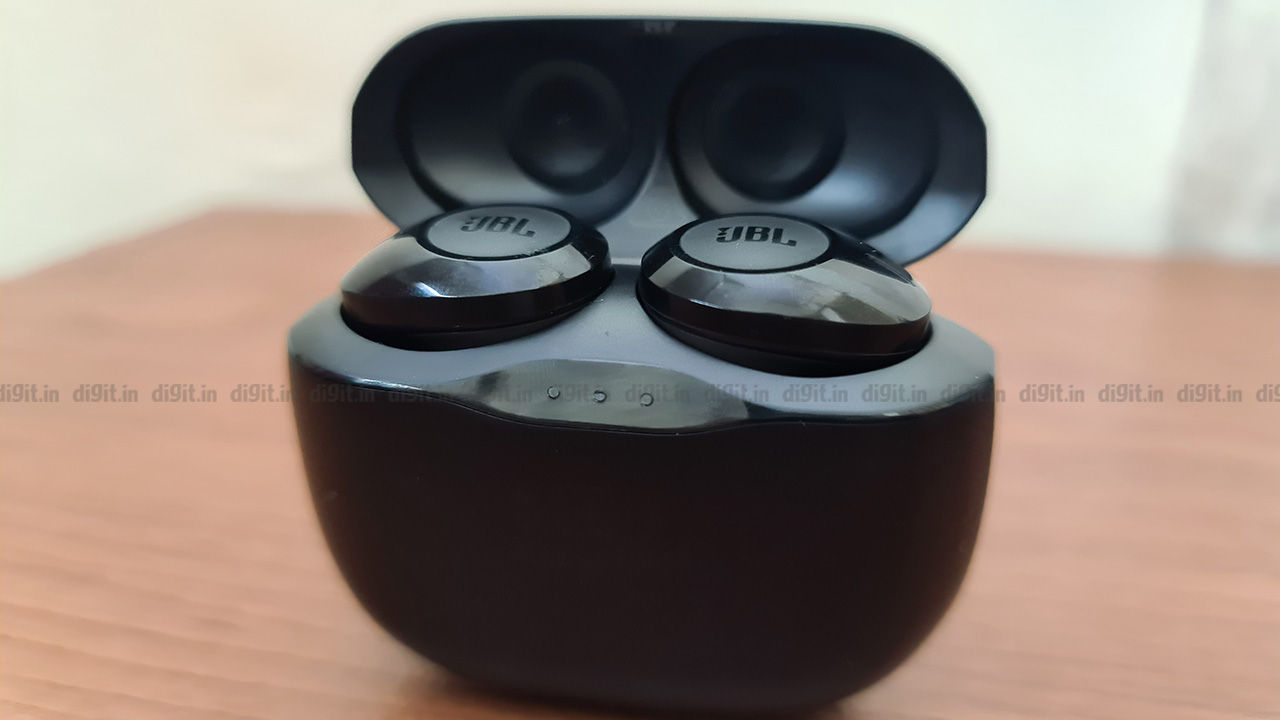 Amidst the plethora of truly wireless earphones flooding the audio market in India, we now have a brand new pair of earphones from JBL, the Tune 125TWS which is essentially a more feature-laden version of the JBL Tune 120TWS earphones. The earphones are fairly basic and are geared towards the casual music listener, however, they do have some impressive features to take note of. Priced at Rs 8,499 (available for a discounted price of Rs 7,499 now), these earphones are mid-range offerings that compete with the Sony WF-XB700 and a few others. Let’s see how the JBL Tune 125TWS fared in our review. 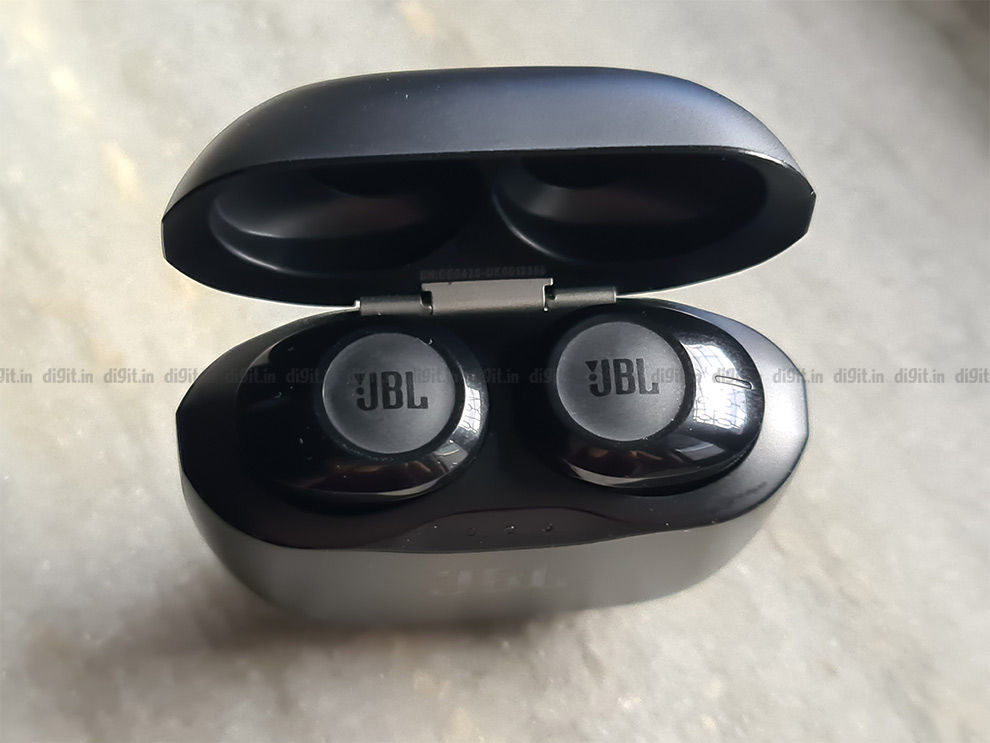 The JBL Tune 125TWS, much like their predecessors – the Tune 120TWS, look like fairly straightforward true wireless earphones, with no extravagant design frills. Still, the earphones are pretty compact and ergonomic and the charging case is sufficiently pocketable as well. We got the Black-coloured unit for review which looks pretty understated. The blue and white-coloured options, on the other hand, stand out a bit more. Nevertheless, the design is pretty uninspired and the charging case looks pretty bland in terms of design compared to some other true wireless earphones in the market. 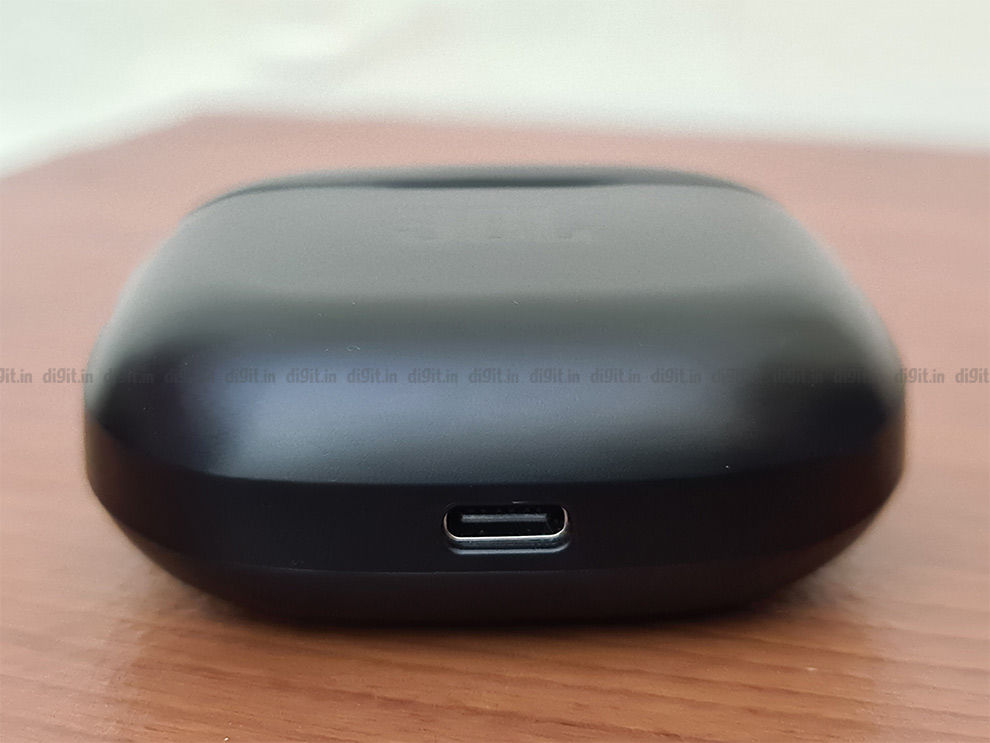 While the charging case is not even close to some of the smallest charging cases we’ve seen for true wireless earphones such as the Samsung Galaxy Buds Plus and the Jabra Elite 75t, the JBL Tune 125TWS’s charging case is still pretty pocketable as mentioned above. Predominantly made out of plastic, the case has a smooth, matte finish that doesn’t feel plasticky or cheap. The USB Type-C port resides at the bottom of the case and due to the design, the case doesn’t stand upright but lies flat on a surface. The flip-top lid has snappy and strong magnets and there are also status indicator LEDs (three white LEDs) on the surface of the case. Overall, the case is pretty robust and the magnets within the case hold the earbuds securely. 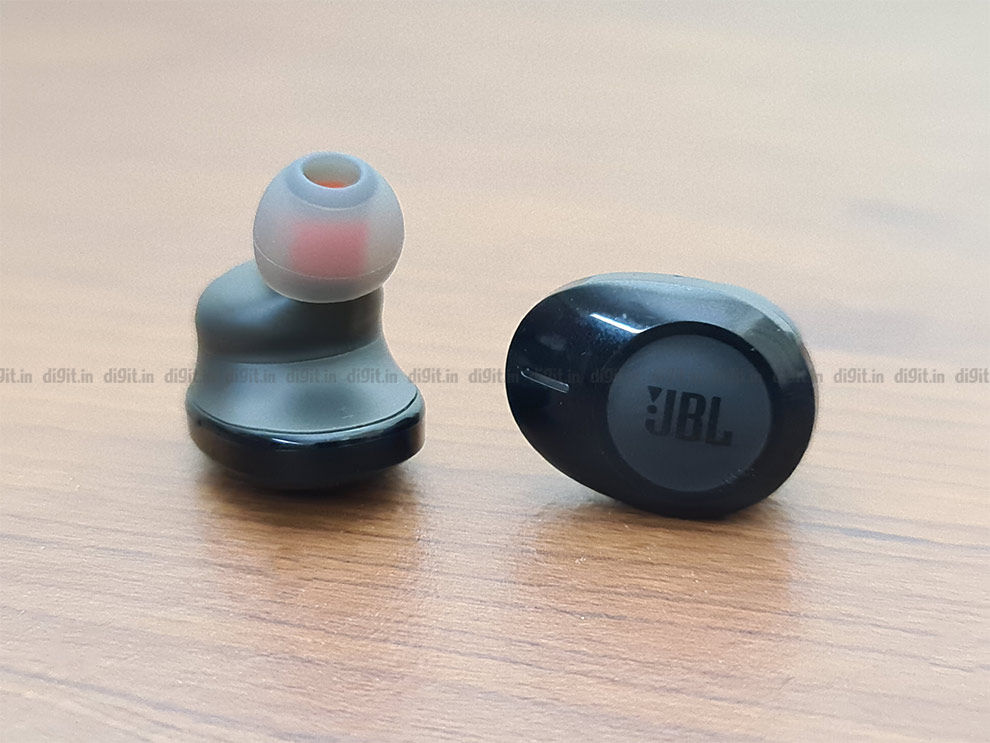 Featuring a half-matte, half-glossy finish, the earphones house the JBL logo on the back panel of each bud. Underneath each logo lies a physical control button that can be used to control music playback and calls. The earbuds also come equipped with magnetic points that snap into the cradles inside the charging case. The earbud’s nozzle is angled at about 45-degrees which provides a secure and comfortable fit. 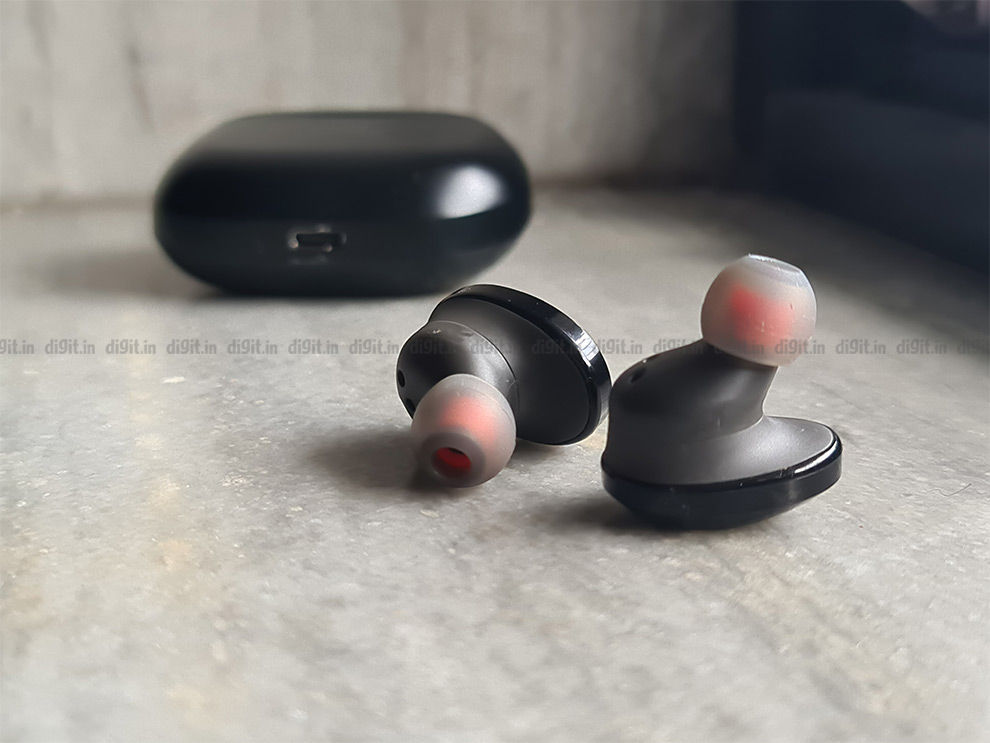 The earphones use a twist and lock mechanism to sit securely in the ear and are supremely comfortable and snug within the ear. The company also provides 3 sizes of silicone eartips for users to choose from. There are no stability gels or wings provided, however, we never really missed them owing to the already-superb fit. We listened to music with these buds for about 2-3 hours without feeling any overbearing fatigue. Owing to their shape though, they do jut out of the ears a fair bit. 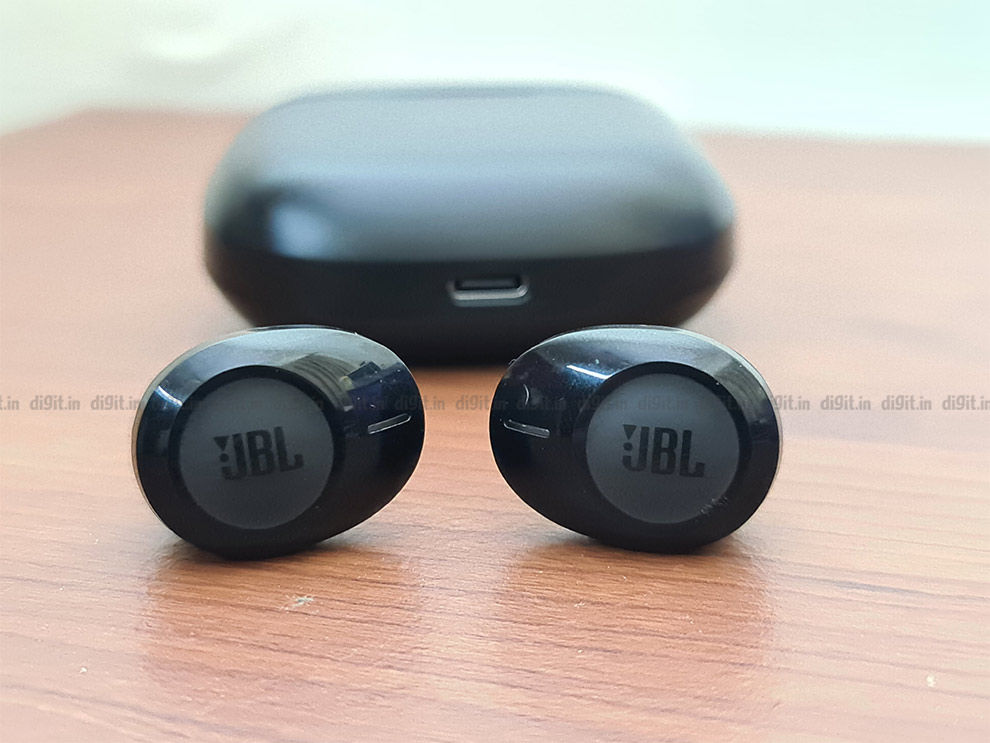 Due to the snug and secure fit, the earphones are exceptionally good at isolating background noises passively. As soon as you put the earphones on, background sounds are diminished quite a bit. They’re great for reducing ambient chatter in noisy offices and even significantly reduce deep rumbles such as a bus engine.

The JBL Tune 125TWS are pretty barebones when it comes to features. They obviously lack premium features such as ANC, touch controls, and on-ear detection, which we don’t even expect on sub 10K true wireless earphones, but they also lack some pretty integral features such as an IP rating and volume controls.

The earphones look pretty sporty, so we safely assumed that the Tune 125TWS would come packing an IP rating, much like the Sony WF-XB700 earphones which come with an IPX4 rating. However, we were surprised and disappointed to learn that the earphones actually come with no IP rating which makes it unsafe to use these earphones in the gym and even during light rains. 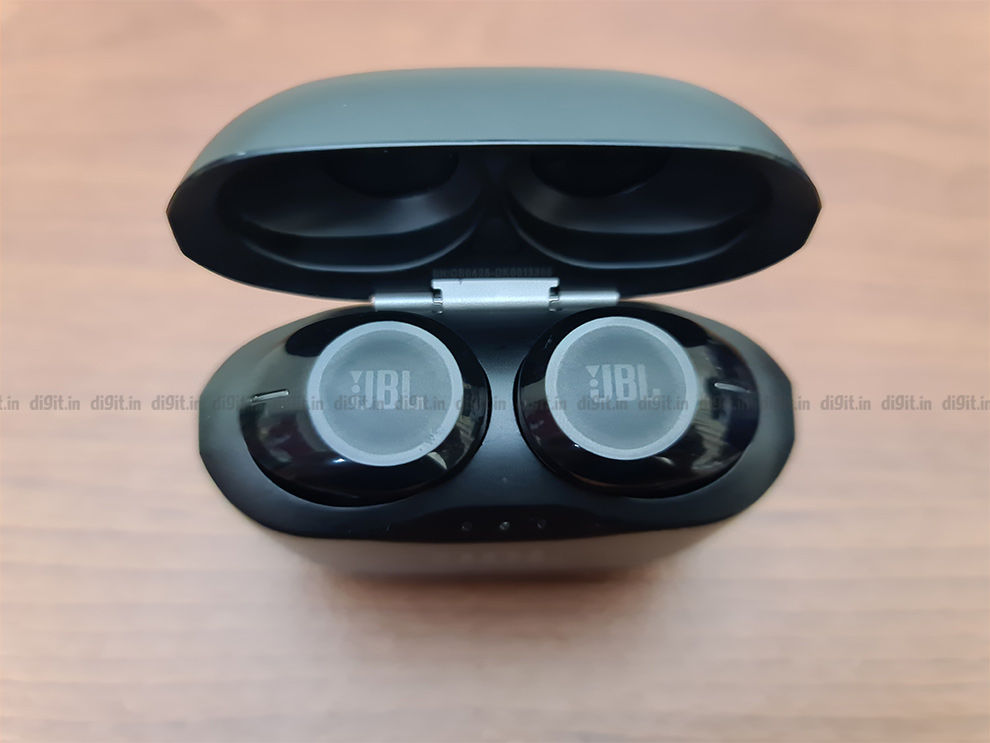 The earphones do come with physical controls that can be used to control music playback and calls. Pressing the right earbud once pauses/plays music or answers an incoming call. Double-tapping the right earbud will summon your device’s voice assistant. Pressing the left earbud once skips a track forward and double-pressing it will go to the previous track. There are no controls to adjust volume levels, which is a shame since there’s nothing really mapped for a long press on either side, and it could have easily been mapped to adjust volume levels. 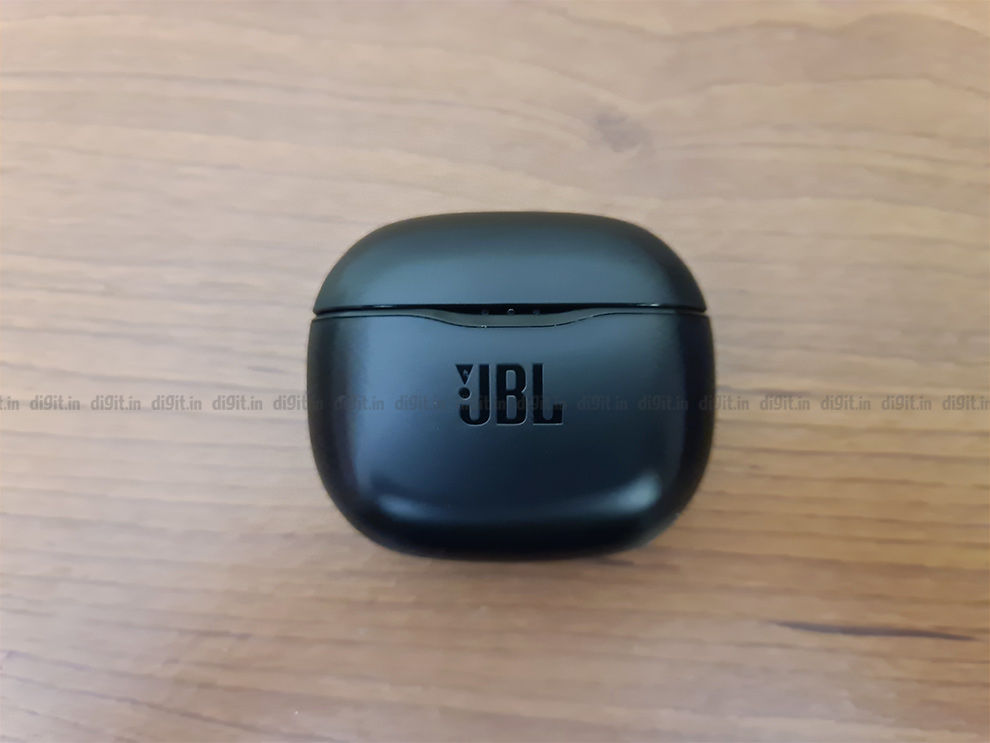 One place where the JBL Tune 125TWS redeems itself when it comes to features is the battery life. According to the company, the earphones have a battery life of about 8 hours on a single charge while the charging case can juice up the earphones three times over, bringing the total battery life to a whopping 32 hours! In our tests, the earphones went from 100 per cent battery to empty in about 7 hours and 45 minutes at about 65 per cent volume, which is excellent. The only true wireless earphones that beat JBL’s battery life in the buds are the Samsung Galaxy Buds Plus, the Sony WF-XB700 and the Sony WF-SP800N.

However, JBL beats all three of these earphones when it comes to the charging case’s battery life, offering 3 additional charges while the others offer only one extra charge to the buds. In our tests, we were easily able to charge the Tune 125TWS buds 3 times over, with some juice left to spare. It’s safe to say that we are thoroughly impressed with the earphone’s battery performance.

Sporting the same 5.8mm dynamic drivers as the JBL Tune 120TWS, the Tune 125TWS delivers a frequency range of 20 Hz to 20 kHz. Unfortunately, there’s no app support to access a customisable EQ, so the sound you get from the earphones is the one you have to stick with (unless you use a third-party EQ). While the sound signature of the Tune 125TWS is unabashedly bass-boosted, which is usually how the JBL sound signature is, here it comes with a bit of a twist. 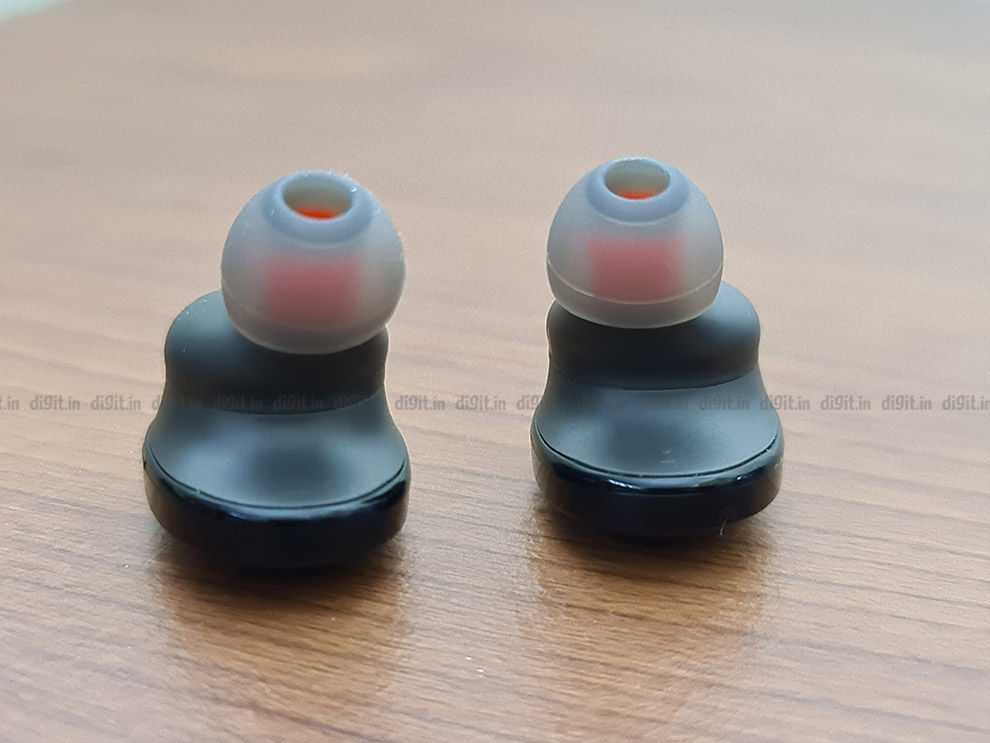 Despite the bass and the lows getting a significant boost and being quite prominent in the mix, the mids are also equally boosted which means that the possibility for heavy auditory masking in the mids is reduced. This produces a more balanced and lively sound signature that comes packing punchy bass and lively vocals and mid-range instruments. The bass is punchy and textured and doesn’t even distort on high volume levels, which is impressive.

Low-baritone male vocals sound rich and clear in tracks such as The Poet and the Muse by Old Gods of Asgard while high-pitched voices are also pretty crisp but can sometimes feature some added sibilance. Lead instruments are pretty accurately reproduced and tracks such as Little One by Highly Suspect highlight the lead guitar and the lead vocals splendidly. 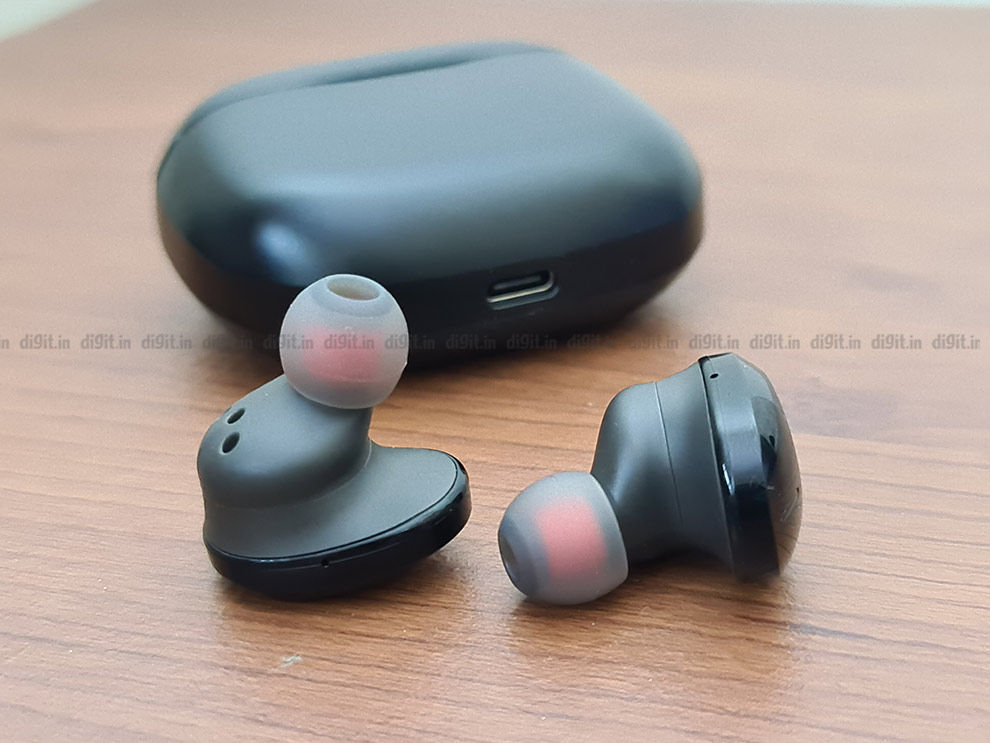 In some tracks such as Hysteria by Muse, the highs can get a bit harsh and tinny since this frequency seems to be riddled with sharp peaks in the frequency reproduction. Nevertheless, since the treble is slightly understated and not as prominent as the bass and the mids, the tinniness won’t bother you a whole lot. Overall, you get a fairly balanced sound profile with punchy bass and clear mids.

Coming to the microphone quality, it was pretty decent. The receiver could hear everything we said during a call (tested over normal network and WhatsApp calling), but our voice did sound a tad distant. Also, environmental sounds are easily picked up and relayed to the listener as well. However, for calls in a quiet environment, the microphone on the Tune 125TWS is pretty decent. The unit did show some serious latency issues though. When we watched Netflix and YouTube with the earphones, the delay between the audio and video was pretty noticeable, which can be a bit jarring to watch.

Priced at Rs 8,499, the JBL Tune 125TWS are a good pair of mid-range true wireless earphones that come equipped with exceptional battery life, a fairly balanced sound signature and a secure and comfortable in-ear fit. However, they do miss out on some integral features such as an IP rating and volume controls. Additionally, if you watch a lot of videos with your earphones, there are pretty noticeable latency issues. Overall, we’d recommend these earphones to users who are searching for mid-range true wireless earphones with excellent battery life and a pleasant sound signature.