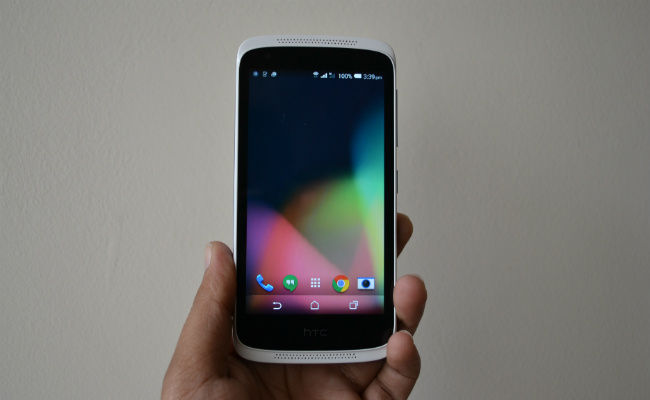 As soon as I held the device, the ergonomics of the smartphone reminded me of the old HTC flagship, the One X. The HTC Desire 526G plus leaves the regular slab like design behind; instead the 4.7 inch display is slightly raised on the phone and looks like it has been wedged in between the two speaker grills. Talking about the grills, don’t get fooled by them as this budget smartphone doesn’t come with HTC’s Boom Sound speaker setup; instead there is only one speaker in the bottom grill. The overall design of the phone is a bit unorthodox which gives the phone a very distinctive look unlike the regular slab like designs. 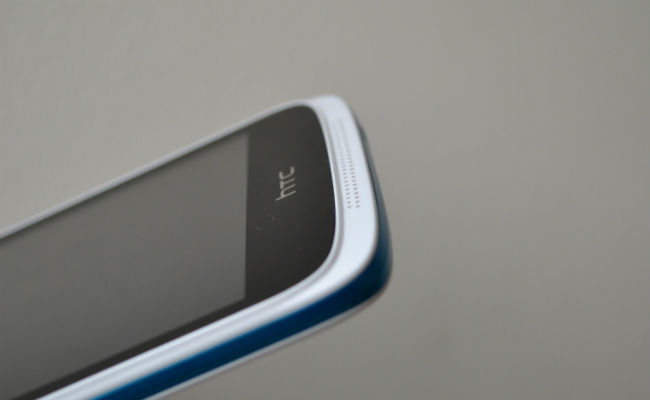 The right side of the smartphone has the power and volume keys which are soft and have very less travel. The whole smartphone has a glossy exterior and is bound to get smudged with use. The top and bottom have the 3.5mm jack and the microUSB ports respectively. 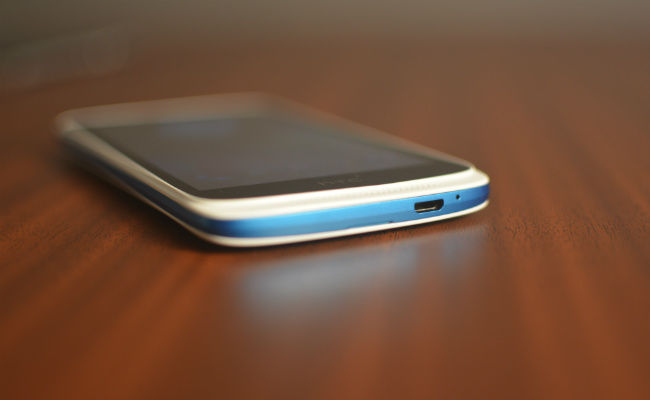 Judging by its looks, the HTC Desire 526G plus may appear a little too flashy but its hardware delivers some substance as well. The 1.66GHz MediaTek processor used in this phone is the same used in the Micromax Canvas Nitro I reviewed earlier. The smartphone is able to create a nice balance between performance and battery life, which is commendable. I had no issues using the phone, be it to surf the web, make calls or play Asphalt 8 on it. Check out the how the HTC Desire 526G plus stacks up against its competition in the synthetic benchmarks given below. 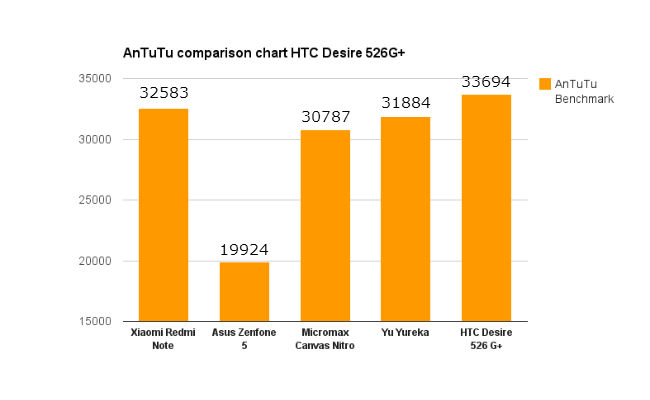 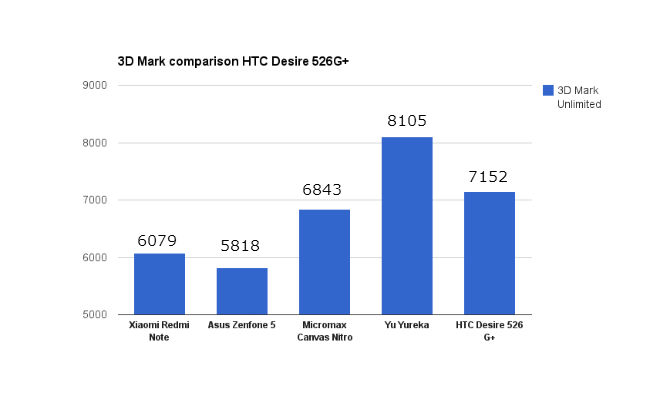 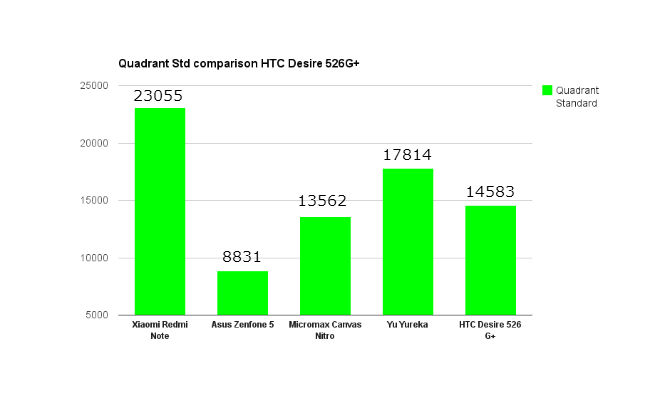 The 4.7-inch 960 x 540p is a bit disappointing though as the HTC’s rivals have displays with 720p resolution. The display has good viewing angles and the colour reproduction is good as well. The other issue I had with the screen is that it is reflective and prone to fingerprint smudges.

The HTC Desire 526G plus is a dual SIM phone like every other phone in its category. Call quality and reception on the phone were good and I have no major complaints. 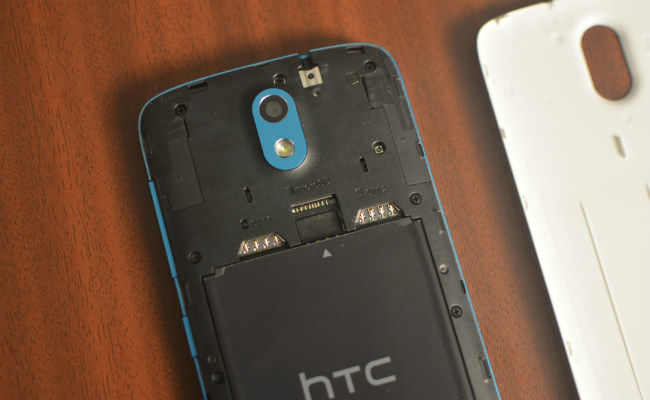 Beneath the display, the phone houses its loudspeaker which is quite loud and the audio quality via headphones is pretty decent as well. Jumping to the UI, you will encounter the familiar Sense UI HTC uses in its smartphones. As I tested a pre-production model, I am not sure if and how much bloatware will come with the post-production model. Overall, the UI feels smooth and if you have used an HTC smartphone before then you will totally feel at home. 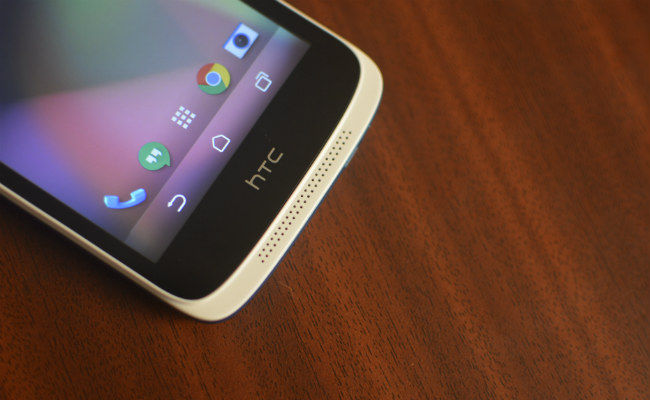 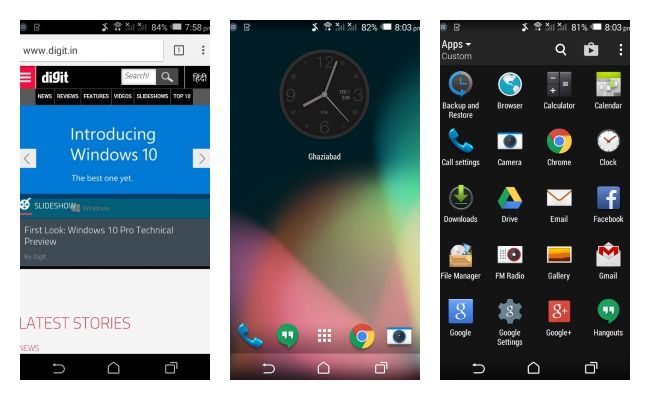 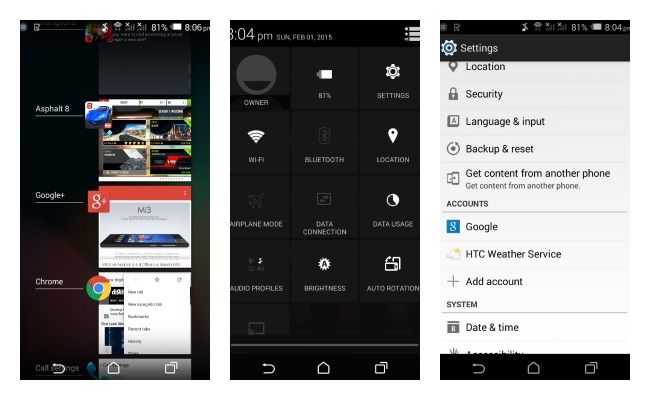 Moving to the back of the smartphone, you will find the 8MP camera with flash which takes decent pictures and are comparable to ones shot with the Asus Zenfone 5. Video quality is a similar affair and the smartphone can shoot upto 1080p videos @ 30fps. An EIS (Electronic Image Stabilization) option is also available in the video mode but it is not effective enough to completely shut out the shaky cam effect in videos. The smartphone also offers a 2MP front-facing camera which again did a decent job in video calls. 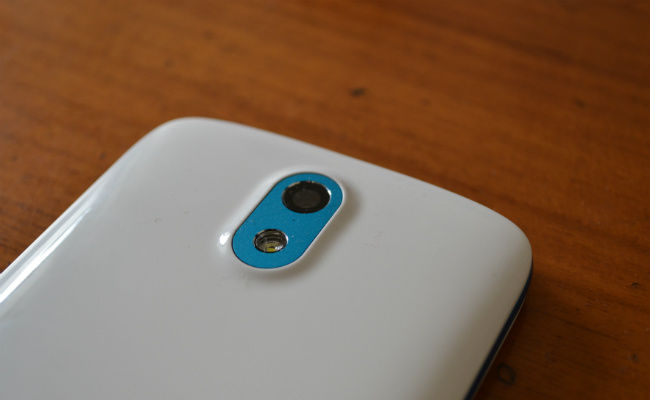 The Desire 526G Plus offers a 2000mAh battery which easily lasted me a day with moderate usage. I was able to find more juice in the battery after I turned on the CPU power saving mode which is available in the battery settings.

With the HTC Desire 526G plus, HTC has come out with a phone that has an outspoken design, good build quality, consistent performance and a decent camera. It comes with good specs and adds another option for customers in a market packed with budget phones. In conclusion, the HTC Desire 526G plus Dual Sim is a good phone, not the best one in its category, but still a good buy overall.