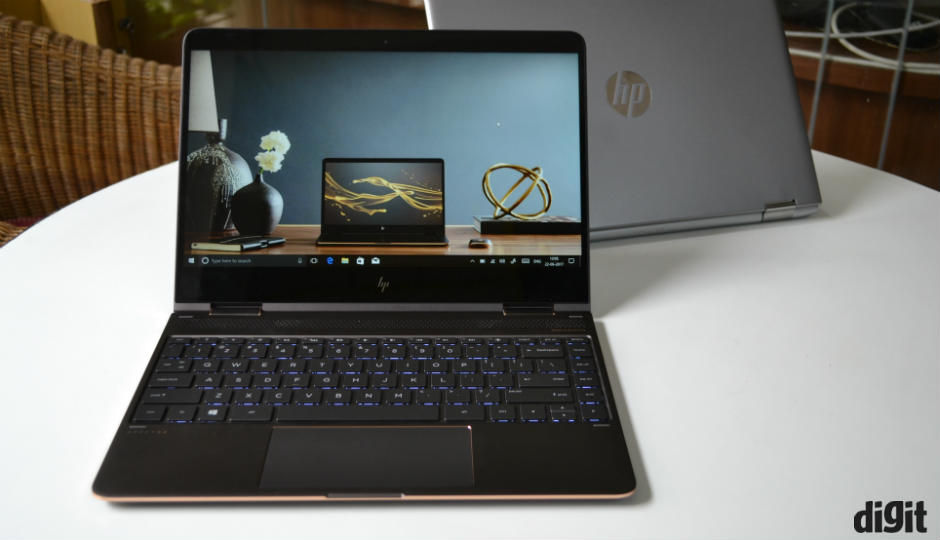 The original HP Spectre X360, which debuted with 6th gen Intel Core processors back in 2015, was one of the finest 2-in-1 ultrabook, but sadly it never made its way to India. Therefore, when HP launched the newer version of the Spectre x360 with 7th gen Intel core processors in India, I was quite delighted.

The new machine has is thinner and lighter. In fact, the HP Spectre x360 is one of the thinnest and lightest 2-in-1 laptops one could buy today. However, at a starting price of Rs 1,15,290, it does not fall in the affordable category. Moreover, if you want the top of the line version, the one we reviewed, it will cost you a whopping Rs 1,57,290. That being said, with this line HP is not looking to sell to the average consumer. The Spectre range is for the enthusiast, for someone who doesn’t want to compromise on performance, look or style. So, if you are one of those enthusiasts, here are my thoughts on the machine. The problem in making a thin and light notebook is that there is limited space to work with and even though all the premium laptops do have pretty much the same guts inside, it is very hard to put it all together without any compromises. Here, HP designers have done a marvellous job putting this machine together. Right from the double barrel hinge design, to the very minute details like the incisively cut edges, everything about the design of the Spectre looks precise. The matte black and copper paint job is reminiscent of what we saw last year on the original HP Spectre, but this time it looks more mature. The two-piece frame feels unorthodox, yet elegant. 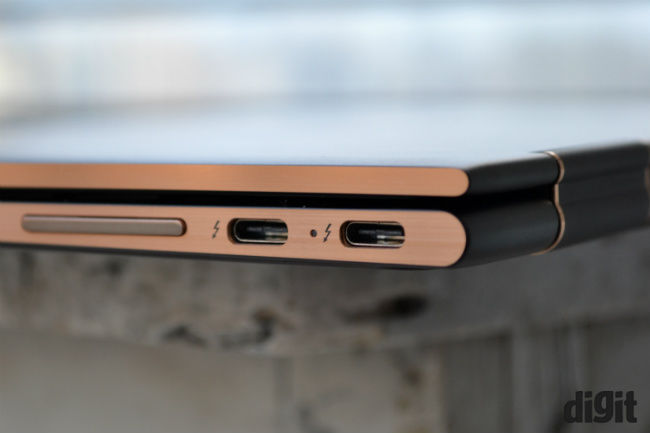 At the same time, the laptop is quite robust and seems durable. This is in part due to the CNC aluminum chassis and partly because of how it is all put together. All of this makes the Spectre x360, the best looking ultrabook at the moment, and its beauty is not just skin deep.

There is little to no flex on the keyboard and display. The screen gets Gorilla glass protection, which is smooth to touch and easy to use with the bundled pen. The hinge holds the display steady in normal day-to-day use, but it may have been better with a little more resistance.

Since this is a convertible, the display can be folded all the way back. Like every other laptop maker, HP has also taken a leaf out of Dell’s design book and cut the side bezels of the display, making the whole chassis even smaller. This helps in keeping the weight down and thus making it easier to use in tablet format. Fortunately, HP has maintained thicker upper and lower bezels, which are helpful when using it in portrait orientation in the tablet form. Even more important is the fact that the camera remains at the centre position, above the display.

Beyond the the fit and finish, the design is complemented by the display. Like last year’s model, the Spectre features a top of the line IPS LCD panel, which is amongst the brightest we have seen recently. Now, it is still not as bright as the new Dell XPS 13, but according to our tests, anything over the 300 lux mark is more than enough for day-to-day use. The only issue I faced is that the display glossy and hence quite reflective, but since this is a touchscreen laptop, that simply can’t be helped. However, once you adjust the display at an angle where it is visible, you will be delighted by its colour fidelity. 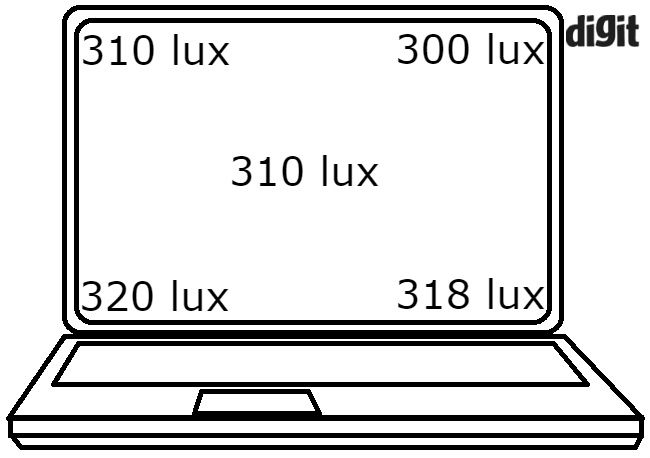 The touchscreen capabilities of the machine feel precise and there are no latency issues. HP does bundle a pen with the Spectre, which is quite good for writing notes or some casual drawing. Although, the Windows marketplace still lacks a wide range of pen capable apps. I only wished that like the Surface, the pen could have been held by a magnetic strip, but maybe that’s just me. 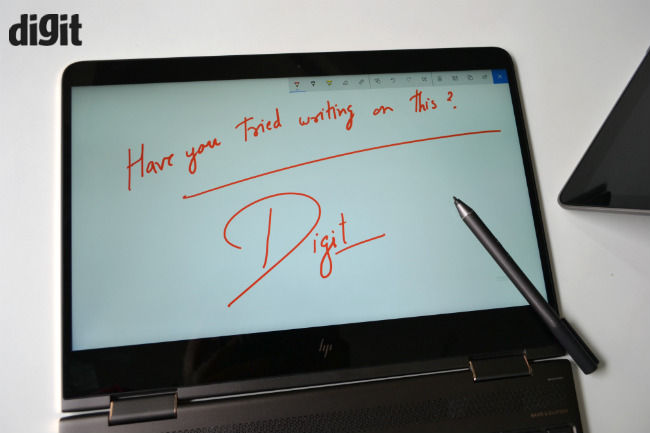 The two USB Type C ports have been carried forward from the original Spectre, but have been moved to the side. Both support Thunderbolt and fast charging this time, for your connected devices (phones). This puts the HP Spectre X360 ahead of the competition, making it more future proof. For all your other non Type-C USB accessories, HP has added a type A port, which works at USB 3.0 standards. While I do miss an SD card slot, that is the price you pay for a thin and light laptop. 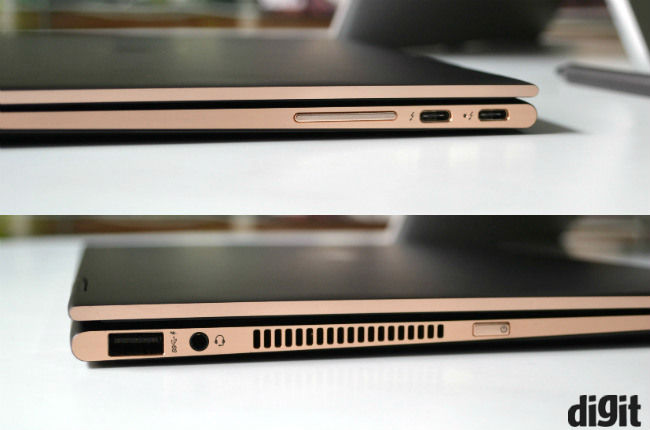 My other grievance with the Spectre x360 is that it does not feature a fingerprint scanner, which I believe should be standard in a premium machine like this. It does have the Windows Hello feature, which worked without any issues during my test period.

As for the keyboard on the Spectre x360, it is a pretty standard affair. It is the same chiclet style keyboard we used on the original Spectre. However, the keys are on the softer side and the backlighting does not make you squint at night. Although, you still don’t get two stage backlighting, which is another thing I think should be standard on a high end machine.

You get 1.3mm key travel, which is decent for a laptop with this size and form factor, but compared to its peers, you can get better. Since HP has squeezed in the size bezels of the display, the overall length of the keyboard deck is also shrunken. This means there is very little gutter space at either end of the keyboard deck. Also, since the last column of keys are just shortcut buttons, it takes some time to get used to. All that said, this is one of the best keyboards you will find on a 2-in-1 ultrabook. 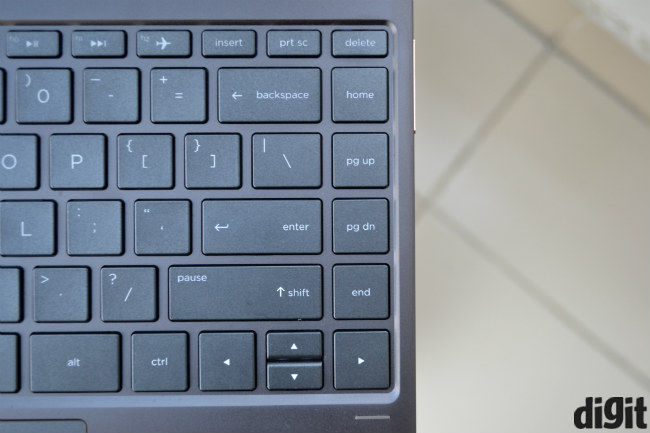 The glass touchpad is also decent and supports multi-touch gestures up to four fingers. It does a nice job at tracking your finger and never missed the double tap gesture either. The touchpad relies on Synaptics drivers to run the show, which allows for decent palm rejection as well. Now, having palm rejection is a plus since the wider touchpad does get in the way of typing. The laptop does not have distinct left and right click buttons, but even the integrated mouse keys are well implemented. The left and right clicks are a bit shallow and click with with an audible sound. However, you can only press the left and right keys at the bottom of the touchpad, which seems a little old school compared to the Apple MacBook’s Force Touch. 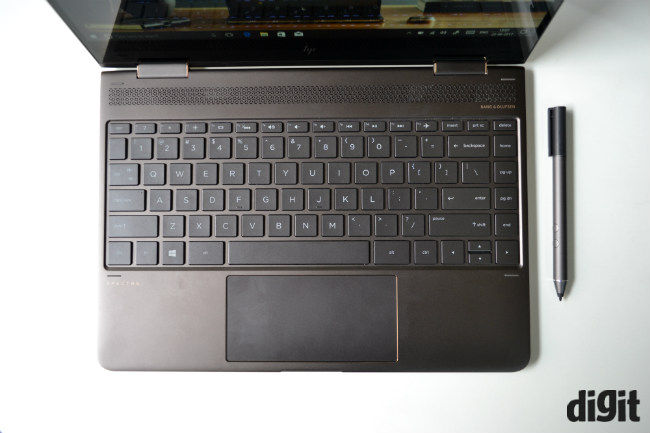 Like the build quality, HP has ensured that the Spectre provides optimum performance all the time. While the machine is available in an Intel Core i5 variant as well, our review unit here is the top of the line variant. On this you get an Intel Core i7-7500U, which is a dual core processor with a base clock of 2.7GHz and can turbo upto 3.5GHz. You also get 16GB of DDR3 RAM and a superfast 512GB NVMe drive by Samsung. For graphics, you have the Intel HD 620 graphics, which has ample firepower for day-to-day tasks and some light gaming. I do mind the use of slower DDR3 RAMs instead of DDR4 ones, and apart from cost cutting, I can’t think of any good reason for HP to choose them.

Using the machine extensively as a daily driver, I noticed that it boots up quickly (under 10 seconds), has ample compute power and tons of RAM for all those Chrome tabs you may want to open. Hence, it is good for all kinds of office work, including light video editing. However, there is a heating issue that comes into play as soon as you start pushing the machine. HP has a two fan design inside the Spectre for all the cooling purposes, but it seems they are not very effective. At times, I observed the CPU touching 60 degree celsius in even simple tasks, such as running a high-res 1080p video or just browsing in Chrome. The heat becomes an even bigger issue once you start cranking things up and run programs such as Handbrake, or try to do some light gaming. The max temperature I recorded was about 72 degrees on the chip and around 43 degree celsius on the left side of the keyboard. This is still not in the uncomfortably hot zone, but an ultrabook of this caliber should not struggle with heating issues in the first place. 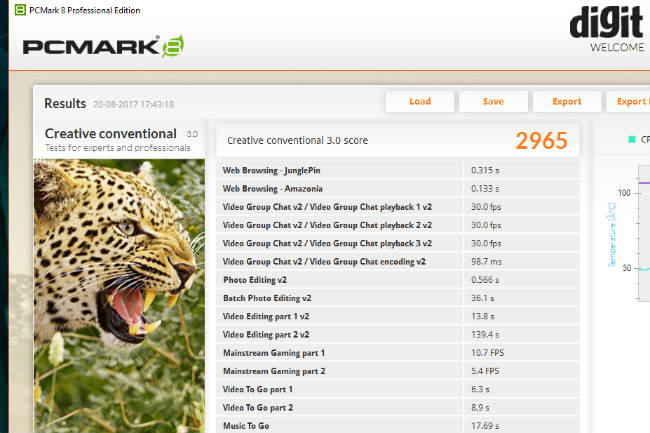 In addition, I also observed minor performance drops of about 100-150 MHz during stress testing, but it does not affect the overall performance of the machine, which remains snappy throughout. As I mentioned, you can do some light gaming as well (if you don’t mind the heat). I tested the Spectre x360 with Dota 2 and Asphalt 8, and both games ran quite well offering playable frame rates. 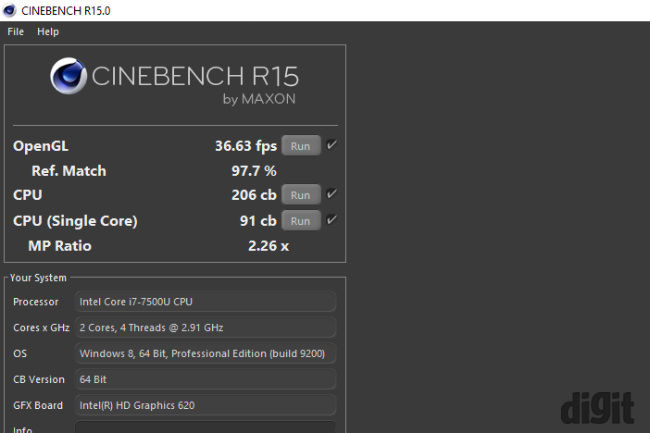 As for the audio, you get a four speaker system on the x360, powered by Bang and Olufsen. There are two speakers above the keyboard and two at the base on either corners. This way the laptop manages to produce decent sound and is quite intuitive if you want to use the laptops in various positions, like the tent mode. While the bass output is still weak and at the highest volume, there is some distortion, this is still one of the best ultrabooks in the market in terms of sound quality. 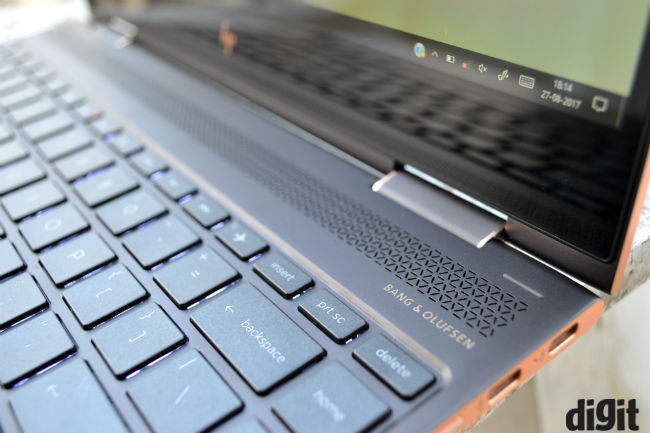 I also need to mention that the 2MP 1080p camera is one of the best I have seen on a ultraportable in recent times.

Another area where the HP Spectre shines is the battery life and for good reason. In this small, yet powerful machine, HP has packed in a massive 3-cell 57.8 Wh battery. This enables the machine to run from dusk to dawn on a single charge, simply providing 9-10 of hours usage time in normal day-to-day office work load with 50% brightness. What’s even more impressive is that the laptop does not significantly throttle while on battery and you get to use the full potential of the machine consistently. It takes just over 2 hours to charge completely and since it charges via a standard Thunderbolt port, you can pretty much charge it with any power brick that comes with Thunderbolt certification.

Overall, I think HP has tried to strike the right balance between performance and design, and achieved that goal for the most part. There are no major issues on this laptop apart from the underlying heating issue, which does not matter unless you push the machine. That being said, it could still be a deal breaker for some.

Having said that, I reckon this is currently the best looking 2-in-1 ultrabook in the market. It has superb build quality, is well designed and offers the flexibility of a 2-in-1. I have no major complaints with the keyboard or touchpad either and the battery life is also a big plus. All this makes it the best 2-in-1 ultrabook we have tested this year. 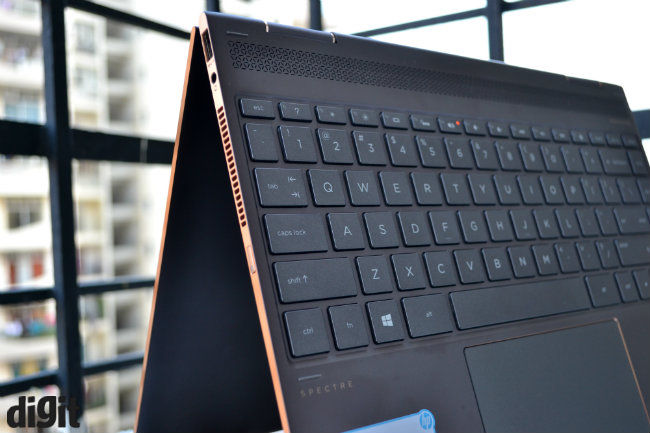 The top of the line HP Spectre X360 is priced at Rs 1,57,990, which is not really affordable. That said, this particular variant of the HP Spectre X360 costs about $1349.99 in the US. This comes around to Rs 88,500 (approx), which is actually not bad for a thin and light laptop with such high end specifications. Unfortunately, in India it all comes down to price, and the higher price tag does hurt the Spectre, like it did the last time.

At the same time, if you are not looking for a 2-in-1 and just require a laptop for your day-to-day use and some more, the new 2017 MacBook Pro with touchbar and better Intel Iris Graphics is a better option. It is equally powerful, even with it’s Core i5, and has similar battery life. It also has a better display, keyboard and touchpad.